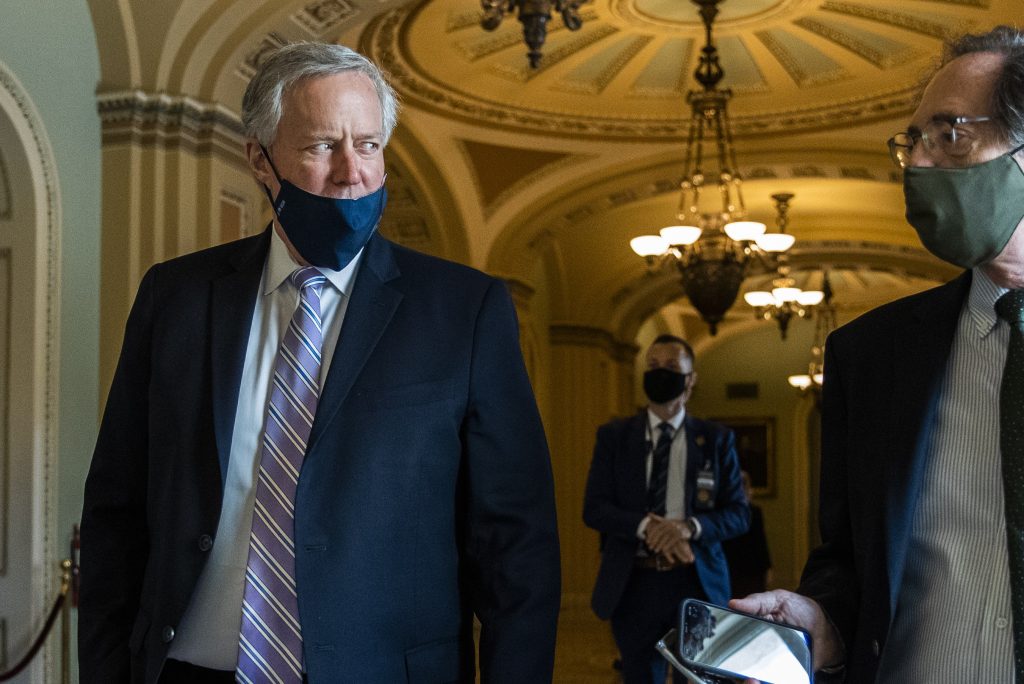 Deadlines looming, House Speaker Nancy Pelosi implored Republicans and the White House on Monday to come quickly to the negotiating table with Democrats over the next coronavirus relief package to prevent unemployment assistance and an eviction moratorium from expiring for millions of Americans.

“Time is running out,” Pelosi said.

The Republican leader is poised to try again to unveil his plan after last week’s effort came to an abrupt halt amid infighting with the White House. It’s a long-awaited GOP counteroffer to Pelosi’s $3 trillion effort passed in May.

But even as Senate Republicans push ahead, the White House is now suggesting a narrower relief package may be all that’s possible with Friday’s approaching deadlines.

The administration’s top negotiators — White House chief of staff Mark Meadows and Treasury Secretary Steven Mnuchin — spent the weekend on Capitol Hill to put what Meadows described as “final touches” on the Senate package as they also proposed a more modest approach.

With the virus death toll climbing and 4.2 million infections nationwide, millions of out-of-work Americans will lose a $600 federal unemployment benefit that is expiring, and federal eviction protections for many renters are also coming to an end. President Donald Trump’s standing is at one of the lowest points of his term, according to a new AP-NORC poll.

A GOP aide briefed on the bill said the plan is to cut the jobless boost to $200 a week as it phases out to a new system that ensures no more than 70% of an employee’s previous pay. The aide spoke on condition of anonymity because the bill hadn’t been released. Other Republicans familiar with the planning said the details are still being discussed.

Mnuchin and Meadows, in appearances Sunday, cited unemployment benefits, money to help schools re-open, tax credits to keep people from losing their jobs, and lawsuit protections for schools and businesses as priorities for quick relief.

“We can move very quickly with the Democrats on these issues,” Mnuchin said.

Pelosi panned the Trump administration’s desire to trim the $600 weekly unemployment aid to ensure no more of 70% of pre-pandemic wages. She also has resisted tackling a relief package in piecemeal fashion, arguing broader aid is needed for Americans.

“Children are hungry, families cannot pay the rent, unemployment is expiring and the Republicans want to pause again and go piecemeal,” Pelosi said.

“We have stood ready to negotiate for more than two months,” she said. She implored them to come to her office “and get the job done.”

As the administration officials exited the Capitol on Sunday, Mnuchin said they had reached agreement with Senate Republicans, but declined to say specifically how they would resolve their differences over cutting back the $600 weekly jobless benefit.

Republicans have argued that federal unemployment boost should be trimmed because the combination of state and federal jobless assistance left many people better off financially than they were before the pandemic and therefore disinclined to return to their jobs.

Many Democrats contend that a lot of people don’t feel safe going back to work when the coronavirus is surging again around the country.

Meadows said he is working with Mnuchin and Labor Secretary Eugene Scalia to address complaints that outdated state computer systems will make it difficult for the jobless to get their benefits in a timely fashion if the formula is changed.

“It’s our goal to make sure that it’s not antiquated computers that keep people from getting their benefits,” Meadows said.

Separately, White House economic adviser Larry Kudlow said a federal eviction moratorium on millions of rental units, due to expire at the end of the month, will be extended. “We will lengthen it,” he said, without specifying for how long.

McConnell’s plans to introduce a $1 trillion virus rescue bill collapsed Thursday during GOP infighting over its size, scope and details.

It was expected to bring $105 billion to help schools re-open, new money for virus testing and benefits for businesses, including a fresh round of loans, tax breaks and a sweeping liability shield from COVID-19-related lawsuits.

The $600 weekly jobless benefits boost officially expires July 31, but due to the way states process unemployment payments, the cutoff was effectively Saturday.

Mnuchin said Saturday that new $1,200 direct payments would be based on the same formula as the earlier aid bill’s. Then, people making $75,000 or less received the full amount and those making more than $75,000 received less, depending on their income. People earning above $100,000 did not qualify for the payment.