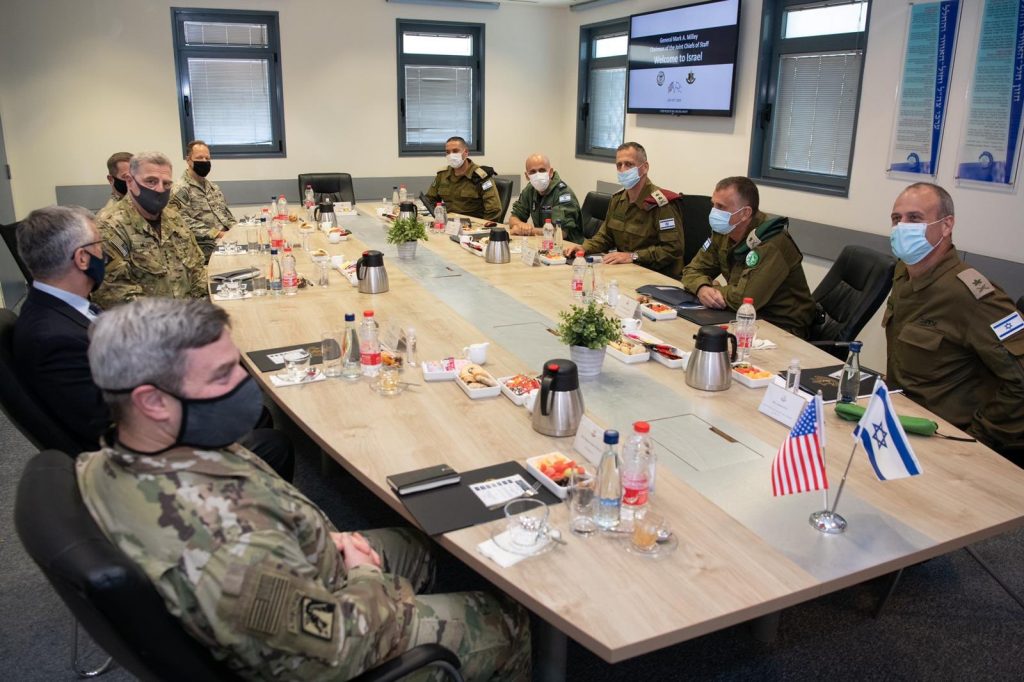 The top U.S. general made an unannounced visit to Israel on Friday to discuss “regional security challenges” at a time of heightened tensions with Iran and its allies across the Middle East.

Army Gen. Mark Milley, the Joint Chiefs chairman, met with senior Israeli military and intelligence leaders at an air base in southern Israel and held a video conference with Prime Minister Binyamin Netanyahu.

The visit came days after an air raid on the Syrian capital, Damascus, suspected to have been carried out by Israel, killed five foreign terrorists, including a member of the Iran-backed Hezbollah.

Late on Friday, the IDF said its attack helicopters struck several positions of the Syrian army in response to unspecified munitions that were fired on the Israeli-occupied Golan Heights. The targets in southern Syria included observation posts and intelligence collection systems, according to a statement from the military.

The Lebanese terror group has vowed to retaliate for the killing of its fighters in Syria, and in recent days Israel has sent infantry reinforcements to its northern border with Lebanon.

Earlier Friday, the IDF said an explosion on the Syrian side of the frontier damaged a building and a vehicle in the Golan Heights. The IDF declined to provide further details.

Recent weeks have also seen a series of mysterious explosions in Iran, including a blast at what analysts say was a nuclear centrifuge production facility. Milley’s visit also came hours after a U.S. fighter jet passed near an Iranian passenger plane as it flew over Syria.

Israel has long viewed Iran as its main regional threat because of its nuclear program — which Tehran insists is for purely peaceful purposes — as well as Iran’s military presence in neighboring Syria and its support for armed groups like Hezbollah.

Israel has carried out scores of airstrikes in recent years targeting Iran’s military presence in Syria, where Tehran is a close ally of President Bashar Assad in the civil war.

Defense Minister Benny Gantz said that in his talks with Milley, he emphasized “the need to continue the pressure on Iran and its proxies.”

The IDF “is prepared and ready for any scenario and any threat, and I do not suggest our enemies test us. We have no interest in escalation, but we will do all that is necessary to protect Israeli citizens,” Gantz said.