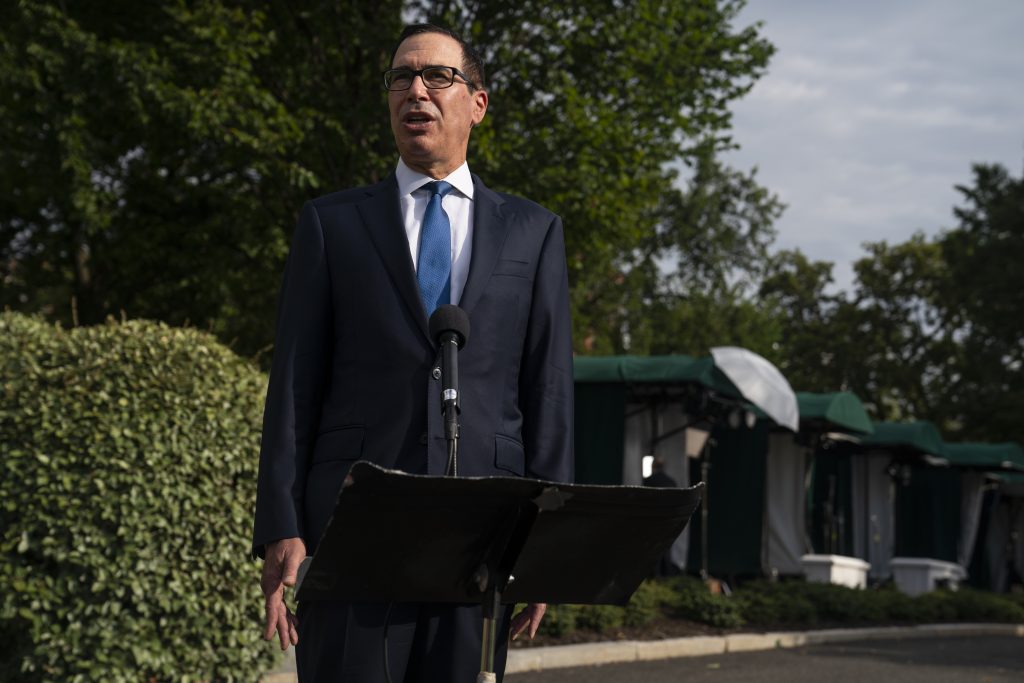 “It won’t be in the base bill,” said Treasury Secretary Steven Mnuchin, speaking on CNBC about the payroll tax cut, killing the idea for now. The cut in the tax that finances Social Security and Medicare has been a major demand of President Donald Trump.

“The president is very focused on getting money quickly to workers right now, and the payroll tax takes time,” Mnuchin said at the Capitol. Only Sunday, President Trump said in a Fox News interview that “I would consider not signing it if we don’t have a payroll tax cut.”

The long-delayed legislation comes amid alarming developments on the virus crisis. It was originally to be released Thursday morning by Senate Majority Leader Mitch McConnell, but the Kentucky Republican instead hosted an unscheduled meeting with Mnuchin and White House Chief of Staff Mark Meadows and delayed the planned release of his proposal.

Afterward, Mnuchin declared the administration had reached a “fundamental agreement” with Senate Republicans.

Given the hold-up, however, Mnuchin and Meadows floated the idea of breaking off a smaller bill that would be limited to maintaining jobless benefits that would otherwise expire and speeding aid to schools. Democrats immediately panned that idea, saying it would strand other important elements like aid to state and local governments.

McConnell’s $1 trillion package is an opening GOP bid in talks with top Capitol Hill Democrats — who back a $3.5 trillion House bill that passed two months ago — in a negotiation that could be rockier than talks in March that produced a $2 trillion rescue package. GOP senators and Trump are at odds over priorities, and Democrats say the Republican plans are not nearly enough to stem the health crisis, re-open schools and extend aid to jobless Americans.

“Our Republican colleagues have been so divided, so disorganized, and so unprepared that they have to struggle to draft even a partisan proposal within their own conference,” said Democratic leader Chuck Schumer.

The must-have centerpiece for McConnell is a liability shield to protect businesses, schools and others from coronavirus-related lawsuits.

The package is not expected to provide any new money for cash-strapped states and cities, which are clamoring for funds, but Republicans propose giving $105 billion to help schools re-open and $15 billion for child care centers to create safe environments for youngsters during the pandemic.

The GOP measure does forge an immediate agreement with Democrats on another round of $1,200 checks to most American adults.

The $600 weekly unemployment benefit boost that is expiring Friday would be cut back, and Mnuchin said it would ultimately be redesigned to provide a typical worker 70% of his or her income. Republicans say continuing the $600 benefit is a disincentive to work, but some Republicans are pressing for a temporary extension of the current benefit if the talks drag.

“We cannot allow there to be a cliff in unemployment insurance given we’re still at about 11% unemployment,” said Sen. Rob Portman, R-Ohio.

The package will also include tax breaks for businesses to hire and retain workers and to help shops and workplaces retool with new safety protocols. A document circulating among lobbyists claims the package would increase the deduction for business meals to 100%, offering help to the restaurant industry.

Mnuchin said there is bipartisan agreement on changes to a popular subsidy program for businesses called the Paycheck Protection Program that would permit businesses especially hard hit by the pandemic — companies with fewer than 300 workers with revenue losses of 50% — to receive a second PPP payment.

The breakthrough on $25 billion in testing money was key after days of debate between Republicans and the White House. There will also be $26 billion for vaccines and $15 billion for research programs at the National Institutes of Health.

Of the $105 billion for education, Republicans want $70 billion to help K-12 schools re-open, $30 billion for colleges and $5 billion for governors to allocate. The Trump administration wanted school money linked to re-openings, but in McConnell’s package, the money for K-12 would likely be split between those who have in-person learning and those who don’t.

In their package, Democrats are calling for $430 billion to re-open schools, bigger unemployment benefits and direct aid checks and a sweeping $1 trillion for state and local governments. They also want a fresh round of mortgage and rental assistance and new federal health and safety requirements for workers.

McConnell calls his proposal a “starting point” in negotiations with Democrats. Congress in March approved the massive $2.2 trillion CARES package, the biggest of its kind in U.S. history.

The severity of the prolonged virus outbreak is upending American life. Schools are delaying fall openings, states are clamping down with new stay-home orders and the fallout is rippling through an economy teetering with high unemployment and business uncertainty. A new AP-NORC poll shows very few Americans want full school sessions without restrictions in the fall.

Still, some Republicans said they were unlikely to vote for any new aid.

“I just don’t see the need for it,” Sen. Ron Johnson of Wisconsin told reporters on Wednesday.