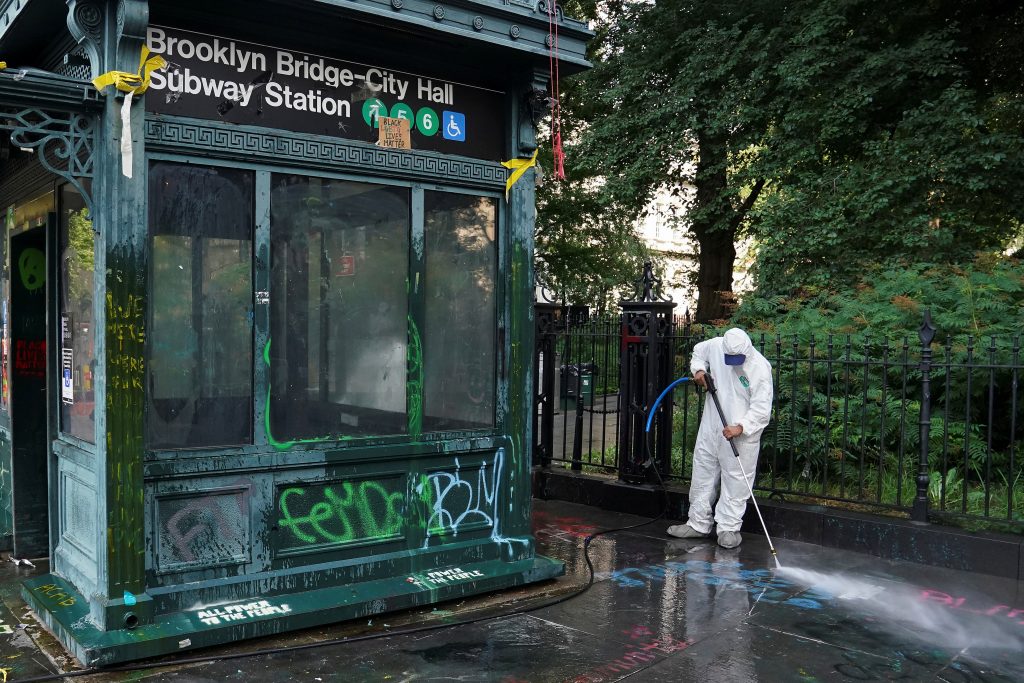 Police in riot gear moved in early Wednesday to clear a month-long encampment of protesters and homeless people from a park near New York’s City Hall.

A line of officers with helmets and shields entered City Hall Park shortly before 4 a.m. and forced the remaining people who were camped there out.

The decision to clear what Mayor Bill de Blasio called the “increasingly unruly camp” was made at about 10 p.m. Tuesday.

Video from the predawn action shows officers moving through the camp, taking down tents and other temporary structures and tossing them into garbage trucks to be hauled away. Cleaning crews arrived later to scrub graffiti from buildings in the area.

Police Commissioner Dermot Shea, who joined de Blasio at his daily briefing, said officers instructed people to leave, and many did, but “about six” people were given summonses for refusing to disperse. One person was arrested for throwing a brick at an officer, denting his shield, Shea said. The commissioner said no injuries to officers or protesters were reported.

De Blasio said shelter services were offered to homeless people at the encampment.

The encampment in City Hall Park started in late June, following weeks of protests sparked by the May death of George Floyd at the hands of Minneapolis police. The “Occupy City Hall” protest was part of a national “defund the police” movement seeking to redirect funds from policing to community needs like housing and education.

Protesters said they would camp out until the city reduced the New York Police Department’s budget by $1 billion. The City Council responded by passing a budget that shifts roughly $1 billion from the police department, but some activists criticized the funding cuts as cosmetic or insufficient.

The encampment swelled to several hundred people at its height but had lately dwindled to fewer than 100, many of them homeless people.

De Blasio, a Democrat, had earlier resisted calls to move the protesters out of the park that adjoins the historic building where he works.

The mayor said Wednesday that the timing of the predawn raid was unrelated to President Donald Trump’s threats to send federal law enforcers to New York as the president has done in Portland. “We were waiting to really understand the facts and specifics and came to the conclusion this was the right time,” de Blasio said.

De Blasio said he sent a letter to Attorney General William Barr and Acting Homeland Security Secretary Chad Wolf opposing any unsolicited deployment of federal officers to New York. “We’re New Yorkers. We will not take something like this lying down,” de Blasio said.

He said he will add his signature to a letter to Barr and Wolf from dozens of other mayors “to make clear that none of our cities wants this intrusion.”