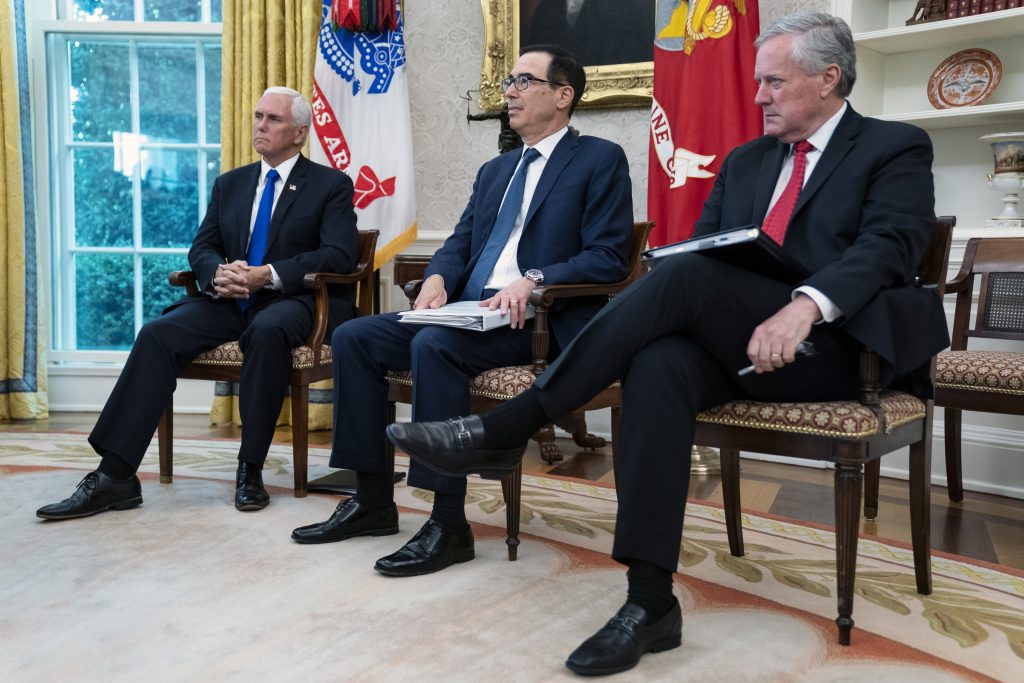 U.S. congressional negotiations aimed at hammering out an agreement on a new coronavirus aid package intensified on Tuesday as COVID-19 infections and deaths surged to record levels across the United States.

The Republican-led Senate, Democratic-controlled House of Representatives and the White House have less than two weeks to agree on a legislative package before assistance runs out for tens of millions of Americans made jobless by the coronavirus pandemic.

Negotiators, however, remained far apart over how much money to spend and which priorities to spend it on, as the United States leads the world with more than 3.8 million coronavirus cases and over 140,900 deaths.

Treasury Secretary Steven Mnuchin and White House Chief of Staff Mark Meadows met with Senate Republicans at midday and were scheduled for a discussion with House Speaker Nancy Pelosi and Senate Democratic leader Chuck Schumer later in the afternoon.

Senate Majority Leader Mitch McConnell said Republicans would soon unveil a new coronavirus bill that is expected to have a $1 trillion price tag.

He said it would include $105 billion for schools; assistance for small businesses; direct payments to individuals and families; help for businesses to meet the cost of protecting employees and customers; money for vaccines, diagnostics and treatments; and liability protection for businesses, health-care facilities, churches, charities and government agencies.

McConnell said on Tuesday he expects another round of direct payments to Americans will be included in the next coronavirus response bill.

Speaking to reporters, McConnell also said he plans to introduce the legislation in the next few days and it will serve as a starting point for negotiations with Democrats.

Democrats are proposing $175 billion to help elementary and secondary schools cope with the pandemic and have said they are determined to fight for provisions in a $3 trillion bill that passed the House in May and includes aid to state and local governments, extended unemployment insurance and protections for workers.

“An outcome will require bipartisan discussions. I do not believe there will be anything in our bill that our Democratic colleagues should not happily support,” McConnell said on the Senate floor.

President Donald Trump has called for a payroll tax cut to be included in legislation, a provision Meadows described on Tuesday as “a very high priority.” But Democrats, including House Majority Leader Steny Hoyer, said there was little enthusiasm for such a move.

Trump is seeking a payroll tax cut ahead of the November election and sees it as a major stimulus for the pandemic-stricken U.S. economy, according to the White House. Democrats have said such a move is unnecessary and could threaten Social Security benefits for the elderly.