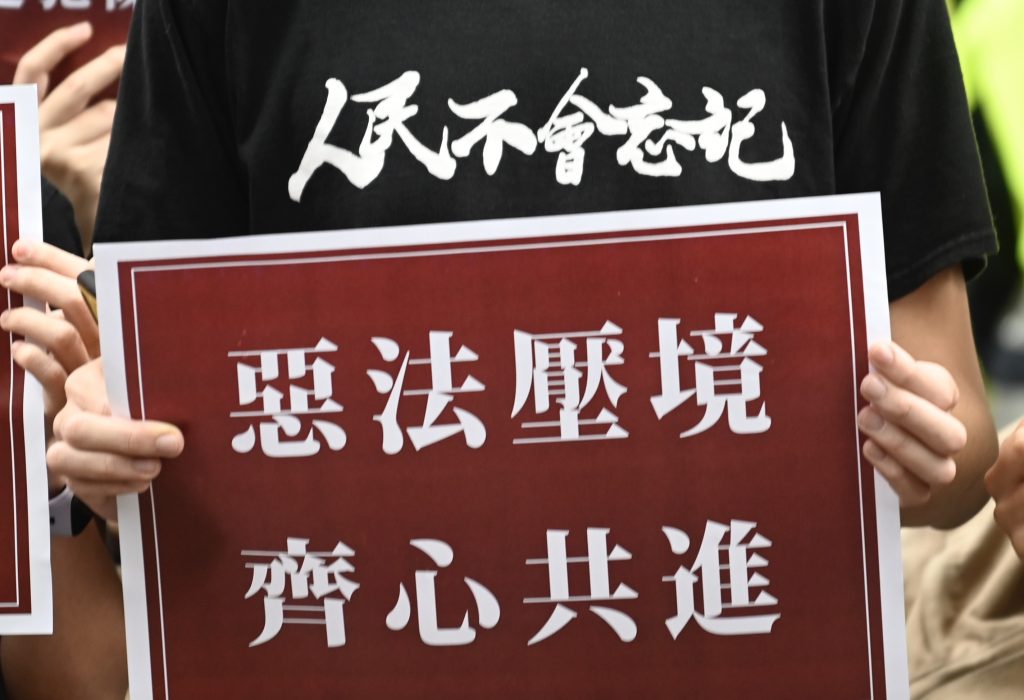 For decades, Hong Kong served as a bridge between China and Taiwan. Now, that appears to be just one more thing that’s changing in the former British colony.

China’s insistence that Taiwanese officials as a condition of stay in Hong Kong sign a statement agreeing that both sides belong to “one China” adds pressure on Taipei to close its de facto consulate in the city. The decision not only potentially impacts millions of people who travel between the two places each year, it also chips away at the city’s role as a gateway from China to the democratic world.

The move advances two goals of President Xi Jinping: punishing Taiwanese leader Tsai Ing-wen for her refusal to accept the “one-China” framework and curbing perceived sources of outside interference in Hong Kong. The Taipei Economic and Cultural Office in Hong Kong and its predecessor agency have provided Taiwan a diplomatic toehold in the city for more than five decades, outlasting Hong Kong’s return to Chinese rule in 1997.

“This development is a reflection of the tighter change in mainland China’s policy toward Taiwan,” said Sonny Lo, an academic and political commentator in Hong Kong. “Hong Kong is now a battleground of geopolitical struggle between the U.S. and China on the one hand, and between the mainland and Taiwan on the other.”

While Taiwan and Hong Kong have both long been proxies for disputes between China and the West, tensions have flared as Beijing grows more confident about asserting its authority and the U.S. attempts to check a rising rival. Tsai, whose Democratic Progressive Party views Taiwan as a sovereign nation, has courted support from U.S. President Donald Trump while offering to help resettle Hong Kong democracy protesters fleeing across the Taiwan Strait in the wake a tough national security law approved by Xi last month.

“In the past, Hong Kong was not only a buffer for cross-strait relations, it had been a window for global countries to engage and interact with China,” Deputy DPP Secretary General Lin Fei-fan said in an interview July 7. “But now the city may be just another Chinese city.”

Efforts to increase pressure on the Taipei Economic and Cultural Office came to light last week after the agency’s acting head, Kao Ming-tsun, refused to sign the “one China” statement and returned home. A number of more junior staffers are also encountering visa difficulties and Taiwan is withholding the renewal of work permits for staff in Hong Kong’s representative office in Taipei, according to a senior Taiwanese official who asked not to be identified.

As a result, the Taiwanese office, which was first established as the Chung Hwa Travel Service in 1966, may soon find it difficult to operate. It’s closure will deal another blow to a series of agreements between Beijing and Taipei that helped expand trade and paved the way for the unprecedented meeting between Tsai’s predecessor, Ma Ying-jeou, and Xi in 2015.

“The DPP and Taiwan’s separatist forces spare no effort to support the U.S. strategy of playing the ‘Hong Kong card,'” the Communist Party’s People’s Daily newspaper said in a commentary Sunday. “They, on one hand, criticize the practice of ‘one country, two systems’ in the city to attack their own political rivals and win votes, while on the other hand support Hong Kong’s opposition forces and provide them assistance and training.”

Requiring representatives to sign the “one China” pledge shows Beijing is taking a more direct role in Taiwan’s relations with the city, the Taiwanese official said. Taiwan is not commenting publicly in an attempt to smooth relations, but China’s new posture could eventually force Taipei to withdraw the more favorable treatment Hong Kong residents received compared to other non-Taiwanese, this person added.

Although the move might not have any immediate ramifications on the almost 6.5 million annual number of passengers traveling between Taipei and Hong Kong — one of the busiest flight routes in the world, according to Routesonline — it could have a greater impact on Hong Kongers looking to study or emigrate there, because they will now need to apply to Taipei.

It could also eventually lead to Hong Kong residents, who don’t need a visa to visit Taiwan and can simply apply for entry permits upon arrival, being treated more similarly to mainland Chinese residents, who do require a visa and are subject to a quota, according to Chan Che Po, an associate professor of political science at Lingnan University in Hong Kong, who’s studied Hong Kong-Taiwan relations.

It could also have “tremendous” implications as the security law freezes up contacts between Taiwan and Hong Kong political parties, student exchanges between the two territories and cooperation between non-governmental organizations, which interact frequently, said Lo, the Hong Kong academic. One key question was how broadly the Hong Kong officials would apply the new “one-China” requirement.

The one-China framework is sometimes called the 1992 consensus, a reference to a landmark meeting between Chinese and Taiwanese officials in Hong Kong. Under it, they agreed that both sides belonged to one China, even if they have different interpretations about what that meant. The DPP, which was in the opposition at the time, rejects the framework.

Ties between Beijing and Taipei have worsened since Tsai’s re-election in January, including disagreements over China’s efforts to limit Taiwan’s participation in world health bodies. Taiwan has also become an issue in the U.S. presidential election, with presumptive Democratic nominee Joseph Biden challenging Trump’s record on support human rights in China.

“None of this bodes well for cross-straight peace,” said Mark Harrison, a senior lecturer in Chinese Studies at Australia’s University of Tasmania. “But Beijing is no doubt waiting to see the outcome of the U.S. presidential election before taking any more significant actions.”