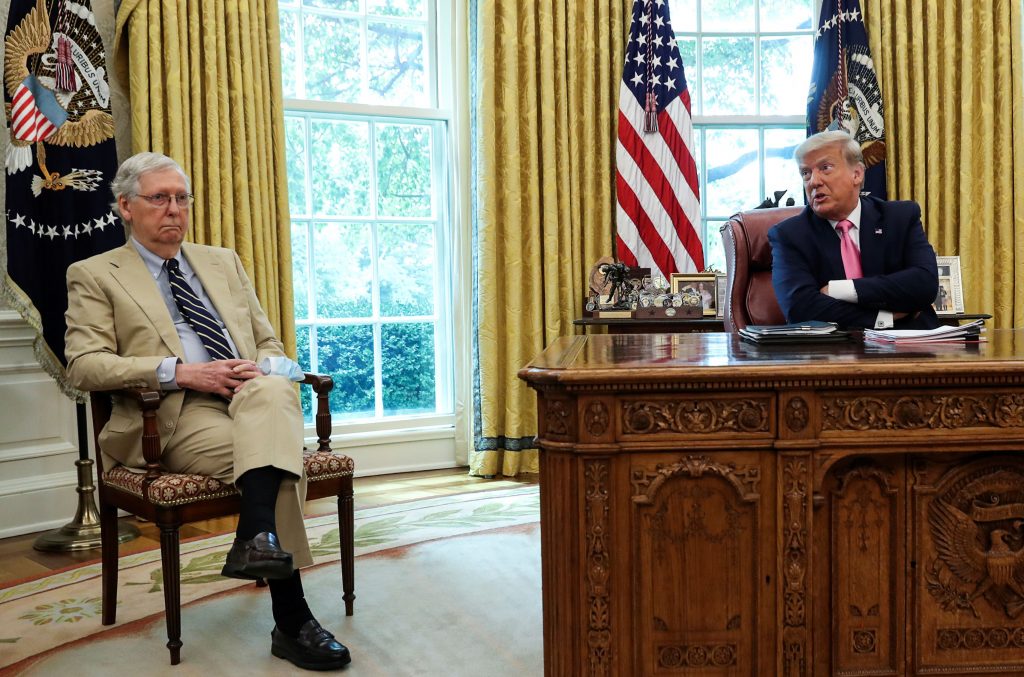 The good news: Congress and the White House agree that the nation needs another infusion of cash ASAP to deal with the resurging coronavirus.

The bad news: When it comes to the basics on what to include and how much, they are in near-total disagreement.

Passing something will take Republican and Democratic votes, so lawmakers and President Donald Trump will have to come to some kind of bipartisan agreement in the next few days or weeks. Here’s what they’re debating.

The benefits passed in March offered $600 a week on top of what people can get from their state unemployment offices. That runs out soon, and Republican senators who were always concerned that it was too much – some people can now earn more on unemployment than they could while employed – are now louder in their opposition. Republicans could propose lowering the unemployment benefits to maybe $200 to $400 a week. But Democrats see millions of Americans unemployed and an economy sputtering and want to continue the same level of benefits.

Trump has been lobbying for this for months. He didn’t get it in any previous relief package, but he’s now projecting a harder line, saying he may not sign a bill without a tax cut. But Democrats and most Republicans are skeptical it would solve the problems at hand. It would help only those people who are employed and receiving a paycheck. The tax cut would come out of the Social Security and Medicare funds. Republicans, whose voters tend to skew older, are wary of opening themselves up to an attack over depleting those funds just months before an election with their Senate majority on the line. It would also cost, by some estimates, $1 trillion – the price of the entire Senate Republican bill.

But as of Monday afternoon, it looked like Senate Republican leaders could acquiesce to Trump’s demand by making it a payroll tax deferral that Americans may have to pay back at a later date. Democrats still don’t think this is the best way to spend money.

Actually, it seems like there could be a majority of Congress on board with doing this again, at least for some of the lowest earners, which underscores just how concerned Washington is about the coronavirus economy and Americans’ financial health.

But Trump’s demand to cut payroll taxes could get in the way of a deal on stimulus checks. It’s unclear if Republicans would support both a stimulus check and a break on Americans’ payroll taxes. And Democrats certainly prefer a stimulus payment, which would go to Americans regardless of their employment.

As the virus spreads to red states, including some where there are competitive Senate races, Republicans seem more determined than ever to help states track and contain the virus. Senate Republicans plan to propose $25 billion for states and localities to test and set up contact tracing that state officials say they desperately need. But the White House wants to block all of that, The Washington Post reported over the weekend. Administration officials think they’ve already given states enough money for this. The Post reported that some Senate Republicans are frustrated by the White House’s stance on this.

The disagreement reflects a fundamental difference between the White House and Congress on whether federal leadership is needed to contain this pandemic. Trump has long said it’s up to the states to manage the virus. But certainly Democrats and a growing number of Republican lawmakers see more of a role for Washington to play.

While the federal government can run a deficit every year, most states are required by their own laws to balance their budgets. And the coronavirus is tearing a hole so big in some city and county budgets that some of them have had to lay off workers like librarians and toll booth operators, and some are warning that police and firefighters could be next. Getting money to states and cities is a top Democratic priority. Democrats in Congress want to spend $1 trillion just for this – which is the size of the Republicans’ entire bill. Republicans think they can give states a fraction of that by reallocating money from the last coronavirus aid legislation.

Republican leaders have long been skeptical of giving states money to balance their budgets, though some vulnerable GOP senators are advocating for this alongside Democrats. Senate Majority Leader Mitch McConnell, R-Ky., even proposed letting some states go bankrupt over the coronavirus, which state budget experts warned could be disastrous for the basic services Americans depend on to keep society moving, like turning on the water and taking away the trash. “Everyone knows if you cannot provide basic services, there is no economy,” Amy Liu, the director of the metropolitan policy program at the Brookings Institution, told me in April.

Trump has made it clear he wants schools to reopen, despite what health experts say. But Democrats are less bullish on that idea if the pandemic is still raging. And that could be a major hurdle for an agreement to give schools money to figure out how to reopen. Republicans may try to force schools to open per Trump’s wishes, The Washington Post reports, by proposing that billions of dollars in federal aid would be available only for those schools that have opened their doors to some degree.

This is a priority that McConnell has been talking about for months. His thinking, as I explained in May, is that reopening means more people go to work and more people shop in stores, and thus more people get sick. And that means more lawsuits against employers, which Republicans say could make or break small businesses already struggling to hang on. On the other side of this debate are trial lawyers, workers advocates and Democrats who argue that employees and customers deserve the right to sue if they think their health is being put at risk. This is an old fight made new by the coronavirus, and it’s not how the two sides can forge consensus.