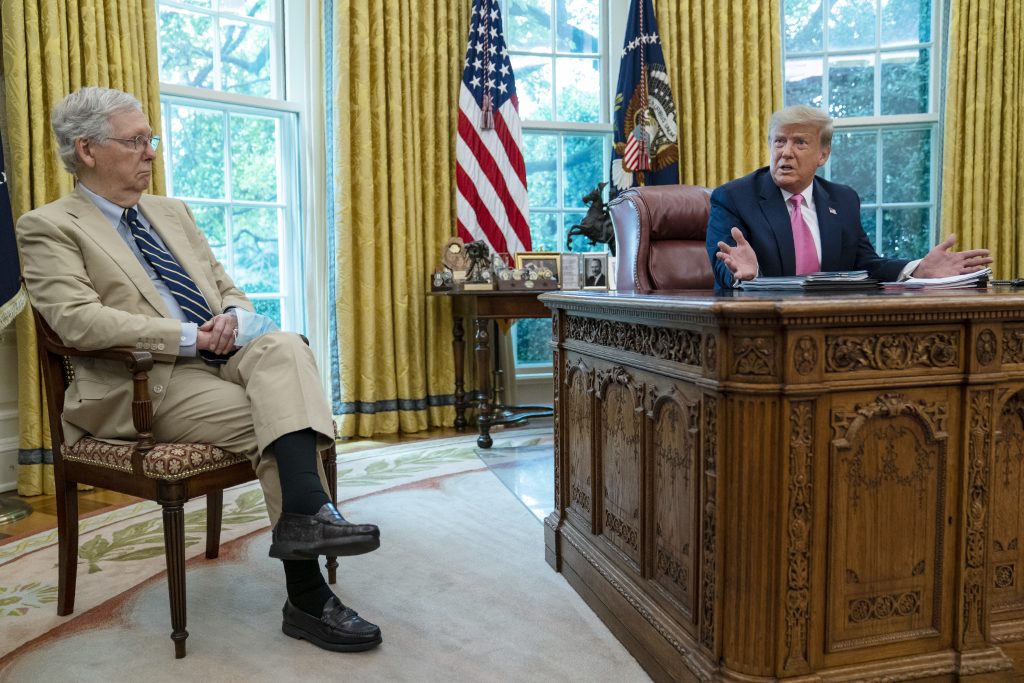 President Donald Trump insisted “good things” were underway on the next COVID-19 aid package Monday as he met with Republican congressional leaders, but new divisions between the Senate GOP and the White House posed fresh challenges as the crisis worsened and emergency relief was expiring.

Senate Majority Leader Mitch McConnell has been prepared to roll out the $1 trillion package in a matter of days. But the administration criticized more virus testing money and interjected other priorities that could complicate quick passage.

“We’ve made a lot of progress on that, and the discussions are going on,” President Trump said as the meeting got underway.

Lawmakers were returning to a Capitol still off-limits to tourists, another sign of the nation’s difficulty containing the coronavirus. Rather than easing, the pandemic’s devastating cycle is rising again, leaving Congress little choice but to engineer another costly rescue. Businesses are shutting down again, many schools will not fully re-open and jobs are disappearing, all while federal aid expires.

Without a successful federal strategy, lawmakers are trying to draft one.

“We have to end this virus,” House Speaker Nancy Pelosi, D-Calif., said Monday on MSNBC.

Pelosi said any attempt by the White House to block money for testing “goes beyond ignorance.”

The political stakes are high for both parties before the November election, and even more so for the nation, which now has registered more coronavirus infections and a higher death count of 140,500 than any other country.

Mnuchin vowed passage by month’s end, as earlier benefits expire, and said he expected the fresh $1 trillion jolt of business tax breaks and other aid would have a “big impact” on the struggling economy.

Mnuchin said he’s preparing to start talks with Democrats. He and Meadows were headed to the Hill later to brief lawmakers.

“We can’t pass the bill in the Senate without the Democrats and we’re going to talk to them as well,” McConnell agreed.

The package from McConnell had been quietly crafted behind closed doors for weeks and was expected to include $75 billion to help schools re-open, reduced unemployment benefits and a fresh round of direct $1,200 cash payments to Americans, and a sweeping five-year liability shield against coronavirus lawsuits.

But as the administration was panning some $25 billion in proposed new funds for testing and tracing, said one Republican familiar with the discussions, Trump was also reviving his push for a payroll tax break, which was being seriously considered, said another Republican. Both spoke on the condition of anonymity to discuss the private talks.

Trump insisted again Sunday that the virus would “disappear,” but the president’s view did not at all match projections from the leading health professionals straining to halt the alarming U.S. caseload and death toll.

“It’s not going to magically disappear,” said a somber McConnell, R-Ky., last week during a visit to a hospital in his home state to thank front-line workers.

McConnell also faces divisions from some in his ranks who oppose more spending, and he is straining to keep the package at $1 trillion.

Senate Democratic Leader Chuck Schumer warned Monday his side will block any effort from McConnell that falls short.

“We will stand together again if we must,” Schumer said in a letter to colleagues.

The New York Democrat is reviving his strategy from the last virus aid bill that forced Republicans to the negotiating table after McConnell’s original bill was opposed by Democrats. This time, the House has already approved Pelosi’s sweeping $3 trillion effort, giving Democrats momentum heading into negotiations.

Trump raised alarms on Capitol Hill when he suggested last month at a rally in Oklahoma that he wanted to slow virus testing. Some of Trump’s GOP allies wanted new money to help test and track the virus to contain its spread. Senate Democrats were investigating why the Trump administration had not yet spent some of $25 billion previously allocated.

The payroll tax break Trump wanted also divided his party because it historically has been used to fund Social Security and Medicare. Cutting it only adds to the nation’s rising debt load at a time when conservatives are wary of any new spending. Some Republicans also see it as an insufficient response to millions of out-of-work Americans.

This would be the fifth virus aid package, after the $2.2 trillion bill passed in March, the largest U.S. intervention of its kind.

While many GOP members hoped the virus would ease and economy rebound, it’s become clear more aid is needed as the first round of relief is running out.

A federal $600-a-week boost to regular unemployment benefits would expire at the end of the month. So, too, would the federal ban on evictions from millions of rental units.

With 17 straight weeks of unemployment claims topping 1 million — usually about 200,000 — many households are facing a cash crunch and losing employer-backed health insurance.

Despite flickers of an economic upswing as states eased stay-at-home orders in May and June, the jobless rate remained at double digits, higher than it ever was in the last decade’s Great Recession.

Pelosi’s bill, approved in May, includes $75 billion for testing and tracing to try to get a handle on the virus spread, funnels $100 billion to schools to safely re-open and calls for $1 trillion to be sent to cash-strapped states to pay essential workers and prevent layoffs. The measure would give cash stipends to Americans, and bolster rental and mortgage and other safety net protections.

In the two months since Pelosi’s bill passed, the U.S. had 50,000 more deaths and 2 million more infections.

“If we don’t invest the money now, it will be much worse,” Pelosi said.