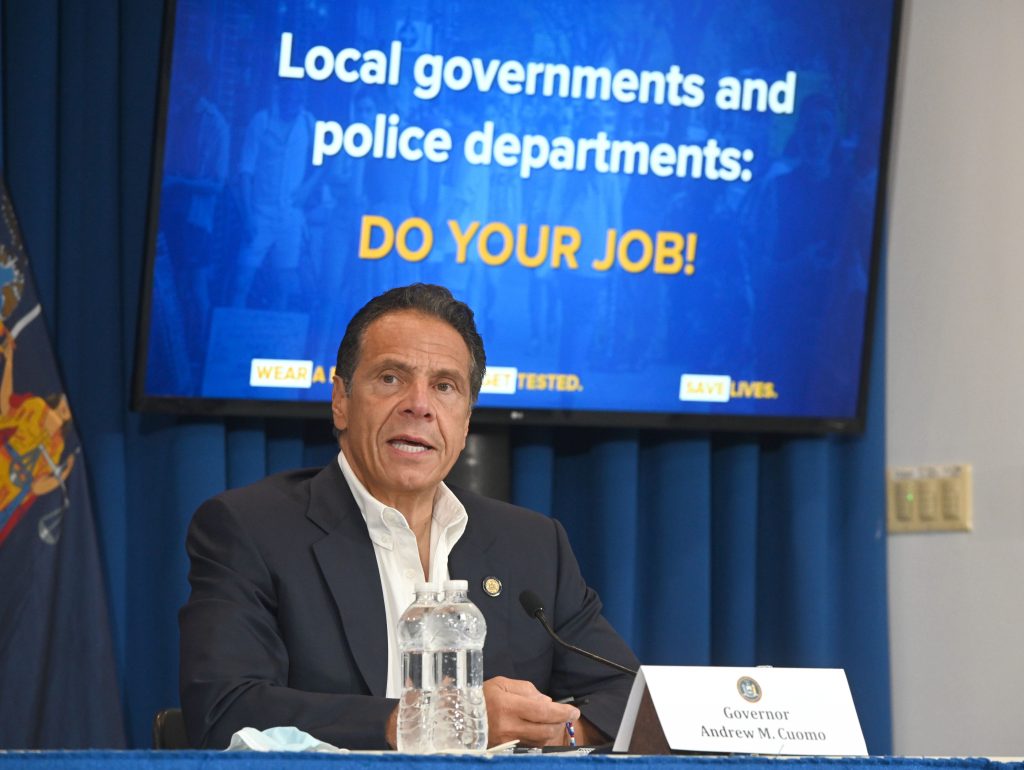 New York City moved to what was supposed to be the final phase of its coronavirus re-opening Monday, but with indoor service at restaurants and bars still banned, malls and museums shuttered amid concerns about the virus spreading indoors.

Phase four of the city’s re-opening does allow more outdoors arts and activities to open. Media production companies can resume work, a major business in the East Coast entertainment capital. And professional sports teams can resume play too, though without fans.

Gov. Andrew Cuomo, though, said the city was not ready for indoor night activities and he called on local governments Monday to dispatch police to disperse crowds that have been gathering outside some bars and restaurants offering outdoor dining and curbside pick-up of alcoholic beverages.

Police departments, including the NYPD, have to “enforce the law” if the crowds get larger than allowed, he said.

“It’s not just showing up and watching,” Gov. Cuomo said in his Monday news conference. “The crowd has to be dispersed. It’s violating the law.”

Social-media posts continue to show crowds gathering outside of bars and restaurants in violation of the state’s social-distancing rules and open-container laws.

Eight people with COVID-19 died in New York Sunday, Cuomo said. About 1% of around 50,000 tests conducted Sunday came up positive, which continues a weeks-long trend.

“We’re holding steady,” Cuomo said. “We’d like to see it at zero obviously, but one percent is very good.”

New York City Mayor Bill de Blasio said at his Monday news conference that “troubling overcrowding” at restaurants “will not be tolerated.”

He referenced the recent shutdown of a restaurant in Astoria, and promised heavier enforcement by the sheriff’s department and by the police department if necessary.

“One restaurant has been shut down,” de Blasio said. “If others have to be we will.”

Cuomo flew to Savannah, Georgia, for the day, Monday, to meet with the mayor to bring “thousands of PPE” and talk about testing and tracing programs and dealing with rising hospital capacity.

Cuomo said he’s exempted from quarantine requirements under a multi-state travel advisory because he’s an essential worker and he’ll be in Georgia less than 24 hours.