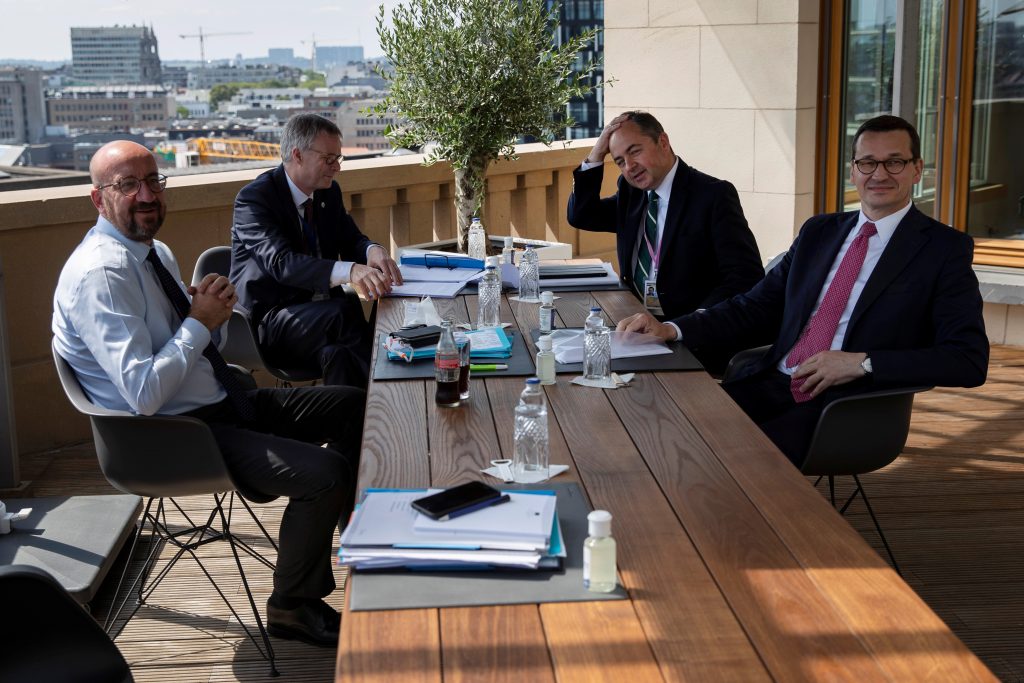 A standoff between EU leaders at a summit in Brussels on Saturday threatened to derail plans for a massive stimulus fund to breathe life into their coronavirus-hammered economies.

“We are in an impasse now. It is more complex than what was expected,” Italian Prime Minister Giuseppe Conte said in a video on social media as the 27 European Union leaders neared the end of a second day of talks. “There are many issues that remain unresolved.”

The budget commissioner of the bloc’s executive reminded the leaders – who wore masks and kept their distance from each other – that COVID-19 was still among them and they needed to act.

“Just a solemn reminder: the Corona crisis is not over: infections on the rise in many countries,” Johannes Hahn tweeted. “High time to reach an agreement which allows us to provide the urgently needed support for our citizens+economies!”

With the pandemic dealing Europe its worst economic shock since World War II, leaders gathered on Friday to haggle over a proposed €750 billion ($856 billion) recovery fund and a 2021-27 EU budget of more than €1 trillion.

But a group of wealthy and fiscally “frugal” northern states led by the Netherlands have blocked progress in the first face-to-face EU summit since spring lockdowns across the continent.

They favor repayable loans rather than free grants for the hard-hit indebted economies mostly on the Mediterranean rim, and they want control over how the funds are spent.

Hopes for an agreement grew earlier on Saturday when the summit’s chairman, European Council President Charles Michel, proposed revisions to the overall package that were designed to assuage the Dutch concerns.

Under the new proposals, the portion of grants in the recovery fund would be reduced to €450 billion from 500 billion and an “emergency brake” on disbursement would be added.

But hopes that this would be enough to get a deal faded quickly.

“The chance is very slim that an agreement will be reached tonight. Very slim,” a diplomat from an EU member state said.

The diplomat said “frugals” were pressing for deeper cuts to the fund and bigger rebates for net payers into the core EU budget, among other demands.

Other countries had their own demands in negotiations criss-crossing different regional and economic priorities, putting in doubt an unprecedented act of solidarity for the EU under which the European Commission would borrow billions of euros on capital markets on behalf of them all.

The EU is already grappling with the protracted saga of Britain’s exit from the bloc and has been bruised by past crises, from the financial meltdown of 2008 to feuds over migration.

Another economic shock could expose it to more euroskeptic, nationalist and protectionist forces, and weaken its standing against China, the United States or Russia.

The exact size of the EU’s long-term budget and how far to use payouts as leverage for reforms, or whether to withhold money from countries that fail to live up to democratic standards, were still unresolved on Saturday evening.

Hungary, backed by its euroskeptic, nationalist ally Poland, has threatened to veto the whole package over a new envisaged mechanism to freeze out countries flouting democratic principles.