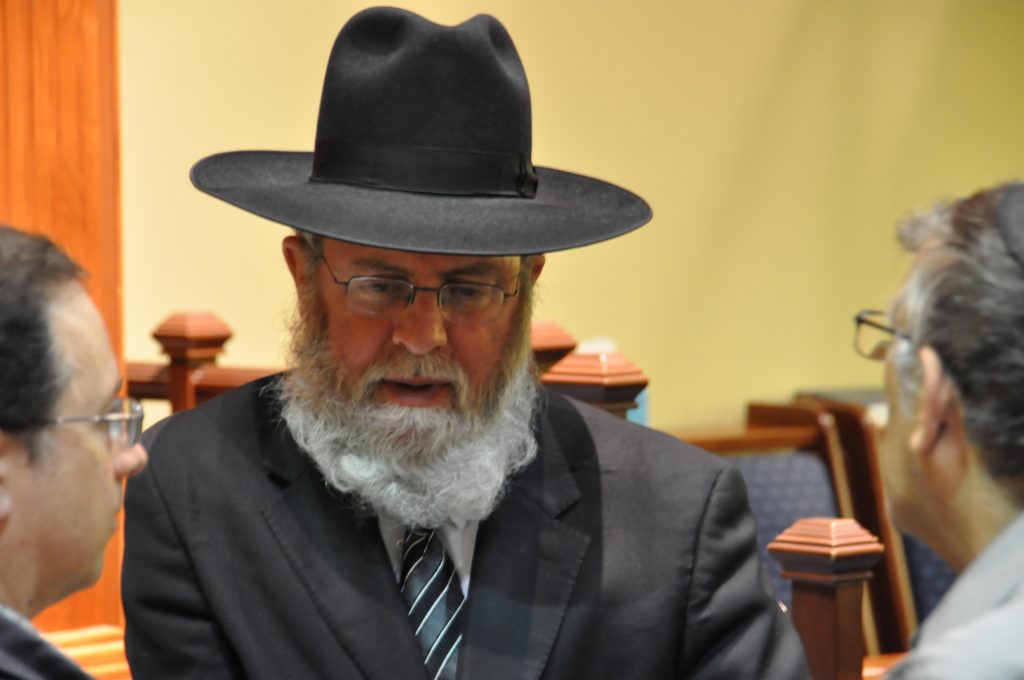 The sefer, She’eilos U’Teshuvos Shemen Zayis Zach, the first sefer published by the Rav, is culled from years of weekly shiurim given by Rav Cohen on “She’eilah of the Week,” in which Rav Cohen researched psakim for various unique halachah she’eilos.

Printed in Lashon Hakodesh, the sefer includes she’eilos such as: “May one listen to a shiur while swimming?” “What is the best way to distribute aliyos between four Kohanim who are ‘chiyuvim’”? “What should be done with older, but still usable, sefarim?” and “Can sushi be considered as two foods for the purposes of mishloach manos?”

The tzibbur is very excited about this new milestone. “The sefer is opening up a new mode of harbotzas haTorah for the Rav in a way that has not been accessed previously,” explained Rabbi Mordechai Millunchick, director of the shul.

Rabbi Shmuel Cohen, director of the Choshen Mishpat Kollel of Chicago, reminisced about the journey of the shul, detailing how it developed into a kehillah with its own unique “Yeshurun style.”

He recalled how over the years, “the Yeshurun style was developed, the route was redirected and crystallized, and more and more people made ‘Torah the ikar’ of their lives … Who knows what the next moment of growth will be. But we can, and must, use our passion, drive and determination to join and be a part of a continuous trek towards greatness as much as we possibly can.”

Rabbi Uri Zimmerman, the new incoming president, presented the sefer to the Rav, thanking the Rav for all he has done for the entire kehillah. Live music followed, during which members of the kehillah danced in place, thrilled to be part of this momentous occasion.

Rav Cohen then emotionally addressed his beloved kehillah, recalling how Hashem has led him along the path of life, guiding him to become a Rav of Adas Yeshurun for the past 32 years. He expressed amazement at the growth of the shul and how it was all fueled by the shul’s baalei battim, who had a strong ratzon. “I don’t even want to call them baalei battim,” Rav Cohen asserted. “I don’t have the right term. Let’s call them ‘shteigers.’”

Over the years, these ‘shteigers’ began asking more and more sophisticated halachic she’eilos, which ultimately led to the publication of this sefer, the culmination of years of work and dedication on behalf of many members of Rav Cohen’s family, his wife, members of the shul, and many others.