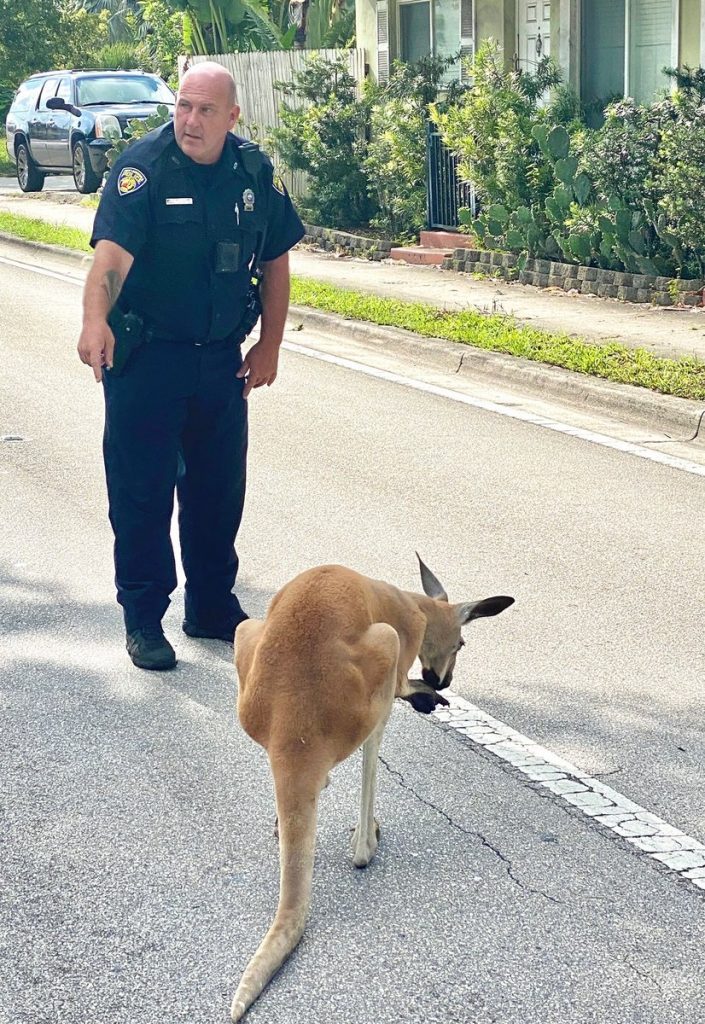 A kangaroo named Jack was just exploring the neighborhood outback of his home north of downtown Fort Lauderdale until police had to jump in and capture him for safety’s sake.

Jack went peacefully in the back of a patrol car to the barn where the police department’s horses are kept.

“He’s so nice,” said owner Anthony Macias, “He doesn’t mean anyone any harm”

The marsupial was first spotted about one block from his home, hopping along the 1600 block of North Andrews Avenue about 9:30 a.m. It was followed to the 1300 block of Northeast Second Avenue.

“I was taking out the recycle bin and I didn’t shut the gate all the way,” he said. “I guess he just punched his way through.”

“At first we didn’t believe it,” he said. “But when we got there it, sure enough, was a kangaroo.”

Police corralled it and put Jack in the backseat of a police car and drove off.

Macias got the kangaroo about four months ago from a man who was moving from his home in Davie and didn’t want Jack anymore.

The 2-year-old kangaroo lived in the backyard of Macias’ home and gets along great with Corgi Max.

“They love each other,” Macias said. “They play and run around.”

Macias orders kangaroo food online and supplements that with grass, apples, potatoes, corn and other vegetables. Jack also has a little canopy and shed in the backyard where he can take shelter from the heat.

Macias was at work when he learned Jack was out and about and he contacted police. He plans to contact the Florida Fish and Wildlife Conservation Commission to find out what permits and licensing he needs for an exotic animal.

“It’s a jungle out there,” quipped Mayor Dean Trantalis. “How bizarre for someone to keep a wild animal in their house. Maybe it will end up at one of our zoos. I’m hoping they find a safe place for it.”