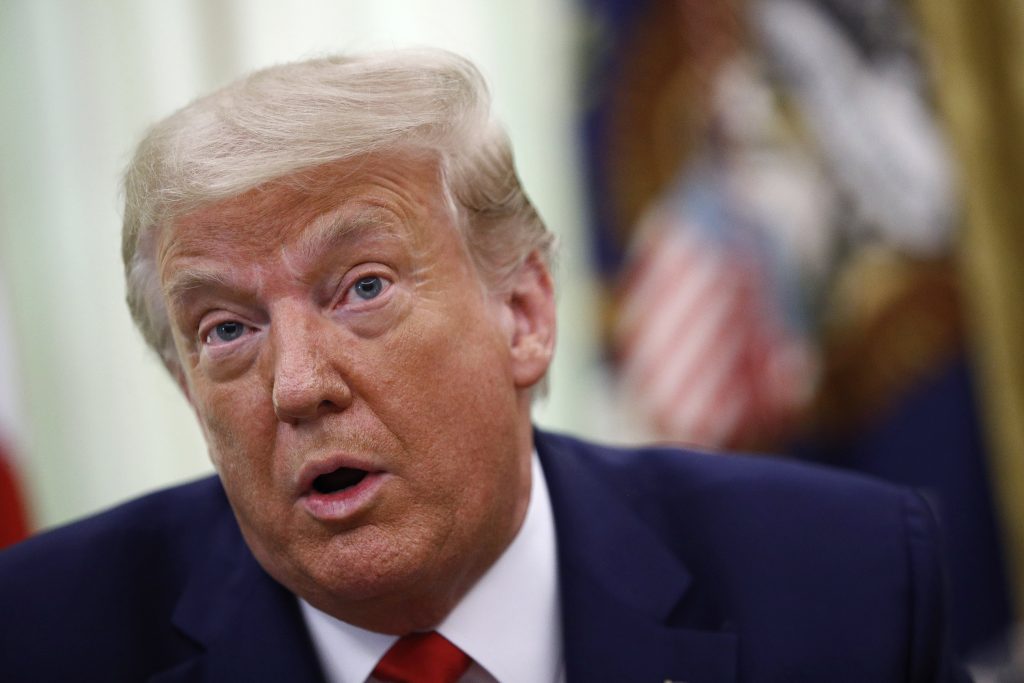 A week after losing a Supreme Court ruling, President Donald Trump’s lawyers said Wednesday they’re considering challenging a subpoena for his tax records by criminal prosecutors on grounds that it’s a fishing expedition or a form of harassment or retaliation against him.

The plans were outlined in a letter to a Manhattan federal judge overseeing legal squabbles related to Manhattan District Attorney Cyrus Vance Jr.’s request to Trump’s longtime accountant for eight years of the president’s personal and corporate tax records in a criminal probe.

The judge, Victor Marrero, scheduled a hearing for Thursday.

Vance is seeking the records in part for a probe of payments that Trump’s then-personal lawyer, Michael Cohen, arranged during the 2016 presidential race.

Cohen was sentenced to three years in prison after pleading guilty to charges related to campaign finance and lying to Congress, among other crimes.

In its ruling last week, the Supreme Court rejected arguments by Trump’s lawyers and the Justice Department that the president cannot be investigated while he holds office or that a prosecutor must show a greater need than normal to obtain the tax records.

The top court returned the fight over the subpoena to Marrero, saying Trump’s lawyers may still challenge it in the same manner as anyone served with a subpoena.

Lawyers for the Republican president noted that the Supreme Court in its ruling said they can raise arguments that the subpoenas seek too much information, or are designed to impede Trump’s constitutional duties or harass, manipulate or retaliate against him.

“The President intends to raise some or all of these arguments,” the lawyers wrote.

Lawyers for the prosecutor wrote in the jointly submitted letter that Trump’s lawyers are asking for more than they are allowed. They said Trump’s lawyers are basing their plans on a concurring opinion that conflicts with the Supreme Court’s majority opinion in the case, and that the lower-court judge already rejected the same arguments Trump’s lawyers are suggesting they might make.

Last September, Trump’s lawyers argued to Marrero that the subpoena requests by Vance were a “bad faith effort to harass” Trump. The judge rejected the argument.

“This Court has already found that there was no demonstrated bad faith, harassment, or any other unusual circumstance,” Vance’s lawyers wrote. “And this Court has rejected the President’s claim that there was any evidence of a ‘secondary motive’ that goes beyond good faith enforcement of the criminal laws.”

Lawyers for Vance, a Democrat, also objected to a request from Trump’s lawyers that they be entitled to gather new evidence before the subpoenas are enforced and that nothing occur until the Supreme Court issues a mandate.

In Wednesday’s letter, they also expressed confidence after the Supreme Court victory, saying they could enforce the subpoena immediately but were holding off, “provided the appropriate schedule moves on an expedited basis.”

Vance’s attorney, Carey Dunne, also asked the Supreme Court Wednesday to formally issue a certified copy of its decision last week to the lower court so Trump’s lawyers cannot argue that everyone must wait another three weeks before proceeding.

Dunne said issues could arise in the “near future” concerning the applicable statutes of limitations if proceedings are delayed, potentially giving Trump “the absolutely temporary immunity” that the Supreme Court rejected. He also said further delay could result in the fading of memories by witnesses and the loss or disappearance of documents.