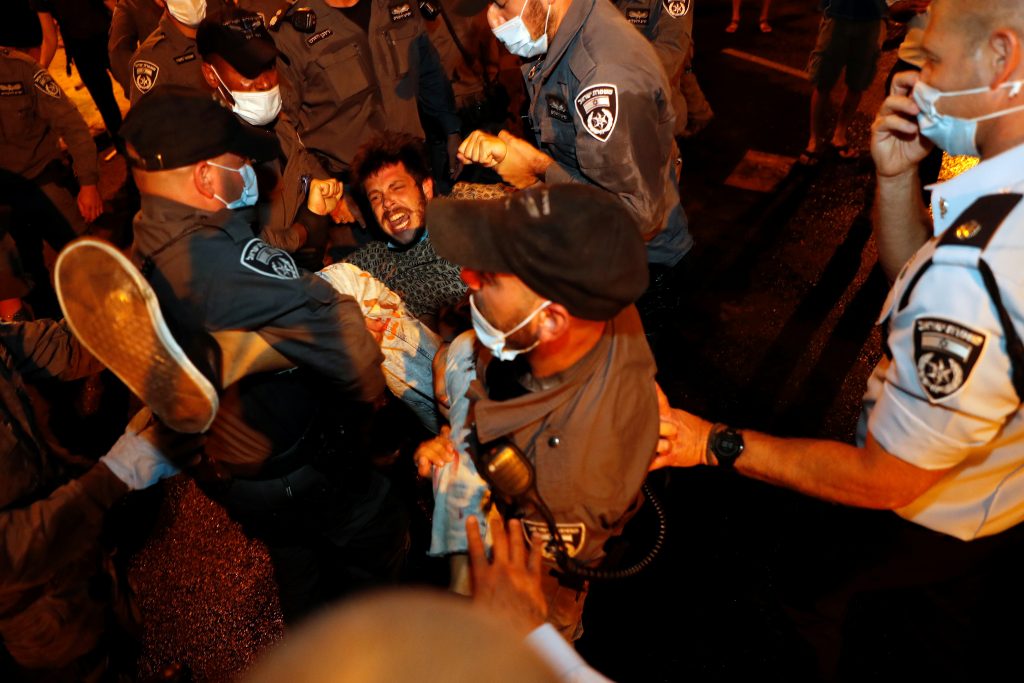 Prime Minister Binyamin Netanyahu, the main target of the demonstrators, responded to the racist harassment of a Channel 13 journalist by protesters outside the PM’s home on Tuesday night.

Avishay Ben Haim was called “Moroccan garbage” while covering the demonstration which was later dispersed by police.

“The shameful attack yesterday at the left-wing protests against the journalist Dr. Avishay Ben Haim, together with the violence there against police, is worthy of all condemnation,” tweeted Netanyahu. “Shame and disgrace.”

Some of the demonstrators attempted to break through security barriers at the scene and clashed with police. As the protest ended, hundreds moved downtown, where they blocked the light rail system, chanting “shame, shame” and “Bibi, go home,” according to The Times of Israel.

Public Security Minister Amir Ohana (Likud), who oversees the police, said that “what we saw yesterday was anarchy,” branding the demonstrators “agents of chaos seeking to sow panic and venom in the public.”

According to Channel 12, Ohana claimed the “incitement” against Netanyahu now is worse than the threats to former prime minister Yitzchak Rabin prior to his assassination in 1995. Leftists have repeatedly accused Netanyahu of abetting the incitement at the time, which he denies.

About 50 people were detained for questioning, eight of whom were brought into court on Wednesday morning for unlawful conduct during the demonstration.

One of the protesters told Kan News after his release from custody that “this is the beginning of the revolution.”

When asked whether he justified the “anarchy” described by the Justice Minister, he said, “I saw no anarchy. I saw people with hope.”

The police opened an investigation into an alleged assault on a detective by a mob of protesters seeking to interfere with an arrest.

Protesters, for their part, accused the police of turning water cannons on peaceful demonstrators as they were sitting in the road.

Ido Zohar, a local music student who witnessed the event, told The Jerusalem Post that even people “who stood on the sides of the road and did nothing to block roads or move barriers also got this cannon mercilessly. It was all just horrible to see,” he said.