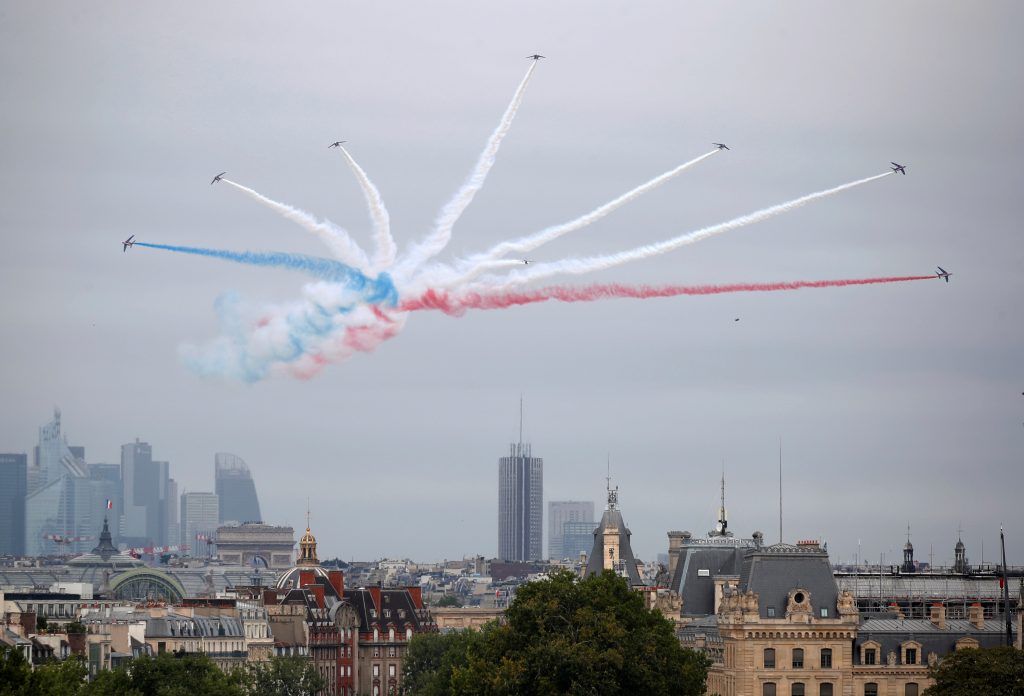 France held a scaled-down annual Bastille Day celebration on Tuesday, with none of the usual tanks and troops parading down Paris’s Champs Élysées, in a concession to the COVID-19 epidemic still stalking Europe.

Instead, President Emmanuel Macron, standing in the back of a military jeep, reviewed ranks of socially distanced troops in the Place de la Concorde after a flypast by military aircraft.

“I wish, with all the French, with the armies themselves, to pay a vibrant tribute to health workers and those who, in all sectors, have enabled public, social and economic life to continue,” Macron said in message released ahead of the parade.

“The dedication, tenacity, courage, solidarity that emerged strongly everywhere, in our cities as in our countryside, command admiration.”

It is the first time since 1980 that the annual parade has not been held along the Champs Élysées.

Spectators on Tuesday were not allowed near Place de la Concorde, Paris’s largest square, in order to avoid the spread of the disease that has killed at least 30,000 people in France.

The parade kicked off with the traditional flypast by the country’s air force, with acrobatic jets trailing blue, white and red smoke. Dignitaries in the reviewing stands were seated at a distance from each other.

Bastille Day, or the French National Day, dates back to the 1789 Revolution. On that day, citizens stormed the Bastille fortress, which was used to detain prisoners and had become a symbol of the harsh rule of the French monarchy.

Traditionally, the national holiday is rounded off with a fireworks display, with thousands of people gathering in the area around the Eiffel Tower to watch.

The fireworks will go ahead this year, but the parkland around the tower will be closed to the public.