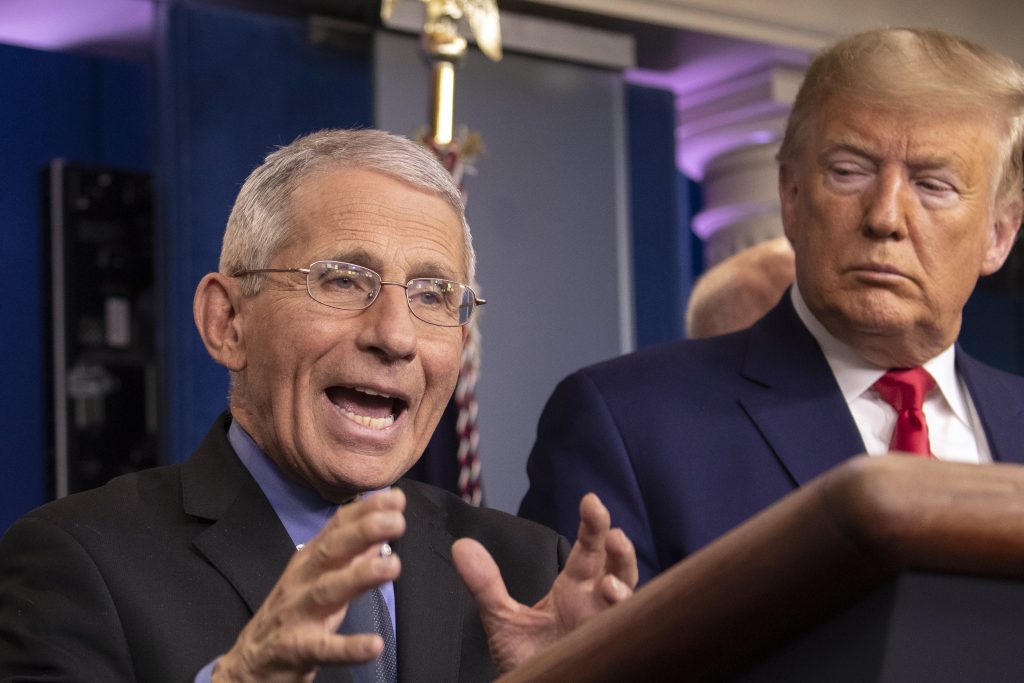 President Donald Trump on Monday said he had a “good relationship” with Anthony Fauci, the nation’s top infectious-disease expert, despite evidence of a growing rift between the two men as coronavirus cases surge in several states.

“I get along with him very well,” Trump told reporters during an event at the White House. “I like him, personally.”

The conciliatory tone was a notable shift after White House officials over the weekend circulated to reporters a dossier of guidance Fauci had made early in the pandemic that was subsequently reversed.

That effort came after Trump publicly criticized Fauci in a pair of broadcast interviews, and an interview published last weekend by the Financial Times in which Fauci said he had not briefed the president in more than two months and hadn’t seen him in person at the White House since early June.

Evidence of continued friction was still apparent Monday, with Trump noting he disagreed with Fauci over the decision to cut off certain travel from China — a decision the president said saved tens of thousands of lives. And White House press secretary Kayleigh McEnany described Fauci as one of many public health officials — who she said offered “varying opinions sometimes” — providing guidance to the president.

But McEnany denied the White House was working to discredit Fauci and described the catalogue of perceived missteps by the director of the National Institute of Allergy and Infectious Diseases as a routine answer to questions posed by reporters for The Washington Post.

“We provided a direct response to a direct question, and that’s about it,” McEnany said.

She added that Trump “certainly” still appreciated Fauci’s advice, despite the president saying in an interview Thursday with Fox News he had “made a lot of mistakes.”

The president said Fauci had opposed his decision to ban travel from China toward the beginning of the pandemic, a move the White House argues saved hundreds of thousands of lives.

Two days earlier, Trump said he disagreed with Fauci’s assessment that the country was still “knee-deep” in the first wave of the pandemic.

“I disagree with him,” Trump said in an interview. “Dr. Fauci said don’t wear masks and now he says wear them.”

Fauci has defended the advice that Americans forgo wearing masks early in the pandemic by saying the administration wanted to preserve supplies for health care workers on the front lines. And health officials long warned their advice for avoiding the spread of the disease would change as they gathered more information, he said.

“We were concerned. The public health community, and many people were saying this, were concerned that it was at a time when personal protective equipment, including the N95 masks and the surgical masks, were in very short supply,” Fauci told TheStreet.

One administration official with knowledge of the relationship downplayed the friction, saying Fauci had not internally expressed alarm over the situation. The divergence boiled down to a president who was optimistic about the country’s ability to emerge from the pandemic interacting with a health official fundamentally conservative in his approach, the person said.

“I don’t think we should necessarily focus on that personal reaction between the president and Dr. Fauci because again, these are real relationships, ordinary relationships and if you’ve been wrong a couple of times, it makes somebody wonder whether you’re wrong again,” former chief of staff Mick Mulvaney said in an interview with CNBC on Monday.