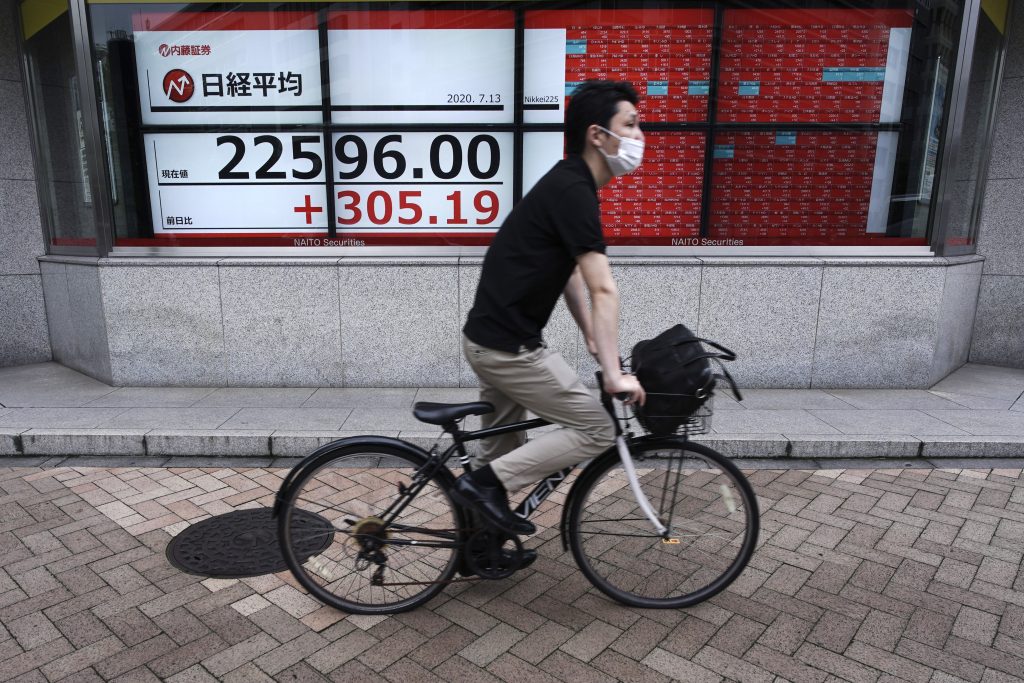 Here comes the latest hurdle for the pandemic-defying stock market to leap with ease, investors hope: the worst quarter for profit growth in more than a decade.

Stocks climbed worldwide Monday, adding to their stellar gains of recent months, as CEOs across the country prepare to tell their investors how much money they made, or lost, in the spring as the coronavirus pandemic pounded the economy.

The S&P 500 was 1.3% higher in midday trading, following up on similar gains across Europe and Asia. It’s close to its highest level since the market began selling off in late February due to the virus worries. Treasury yields also climbed, though some hesitance still hung over markets as the price of gold ticked higher.

Earnings reporting season really gets going on Tuesday, when several of the country’s biggest banks are slated to report their results, including JPMorgan Chase. Across the S&P 500, expectations are almost universally dreadful.

Analysts say the biggest U.S. companies likely saw their earnings per share plummet nearly 45% from April through June, compared with year-ago levels. That would be the sharpest drop since the depths of the Great Recession in 2008, according to FactSet.

Wall Street expects profits to have disappeared completely for the energy sector, which drowned under below-zero prices for oil at one point during the quarter as demand disappeared. It also forecasts a loss for companies that depend on consumers spending on non-essentials, such as cruise-ship operators and retailers, as those customers got locked away by stay-at-home orders.

Investors are expecting banks, which traditionally kick off each earnings season every three months, to say they’ve had to set aside billions of dollars to cover loans potentially going bad due to the pandemic-caused recession.

Investors, though, largely seem willing to give a pass for such terrible results in the latest quarter and maybe even for a couple more.

“We — and many investors — expect the coronavirus-induced collapse in profits will be concentrated in 2020,” Goldman Sachs strategists wrote in a report.

Instead, investors are focusing on a hopeful return to profit growth in 2021 and beyond. The hope is that the economy and declines in corporate profits bottomed out in the spring and will continue to improve as governments have relaxed lockdown restrictions. The job market, retail sales and other measures of the economy have already begun showing some budding improvement.

Of course, all the optimism is colliding with fears that the recovery could be short-lived due to jumping coronavirus counts across global hot spots. Florida and other hard-hit states in the U.S. Sun Belt have been in the spotlight in particular, with the stock market often jerking suddenly lower following announcements there of rising numbers of known infections and deaths.

If states continue to bring back restrictions on their economies to slow the resurgence, it could choke off the fragile economic improvements just as they got underway.

Such concerns have helped the price of gold recently rally to its highest level since September 2011, shortly after it set its record. Gold added $7.70 to $1,809.60 per ounce in Monday morning trading.

Another measure of nervousness in the market also ticked higher. The VIX, which shows how much volatility traders expect from the S&P 500 in upcoming weeks, rose by 3.2%.

Stocks nevertheless mostly climbed, with Maxim Integrated Products surging 11.1% for the biggest gain in the S&P 500. Semiconductor maker Analog Devices said it will buy the company in an all-stock deal that values the combined company at more than $68 billion.

PepsiCo added 2% even though it said its profit fell 19% last quarter from a year earlier. Results were better than Wall Street had forecast, leading to the lift. But the company behind Frito-Lay and SodaStream also said the future looks so uncertain given the coronavirus pandemic that it won’t offer any predictions about its sales and profits for the rest of the year.

The gains helped add to the S&P 500’s 1.8% climb last week. It has pulled back within 5% of its record, which was set in February, after being down nearly 34% in late March. The market has been stuck in a mostly up-and-down churn since early June, though, when it got within 4.5% of its record.

Even though reports on the economy since early June have painted more improvements, worries are still high that the stock market has roared back to nearly record levels so much faster than corporate profits or the economy are expected to. Many economists and analysts say it could take years for that to happen, and the recent resurgence in coronavirus counts puts even that timetable in jeopardy.

The yield on the 10-year Treasury rose to 0.64% from 0.63% late Friday. It tends to move with investors’ expectations for the economy and inflation.