Israel Netanyahu to Chareidi Parties: Before Any Closures, Consultations Will Be Made With Representatives of Community
CoronavirusIsrael 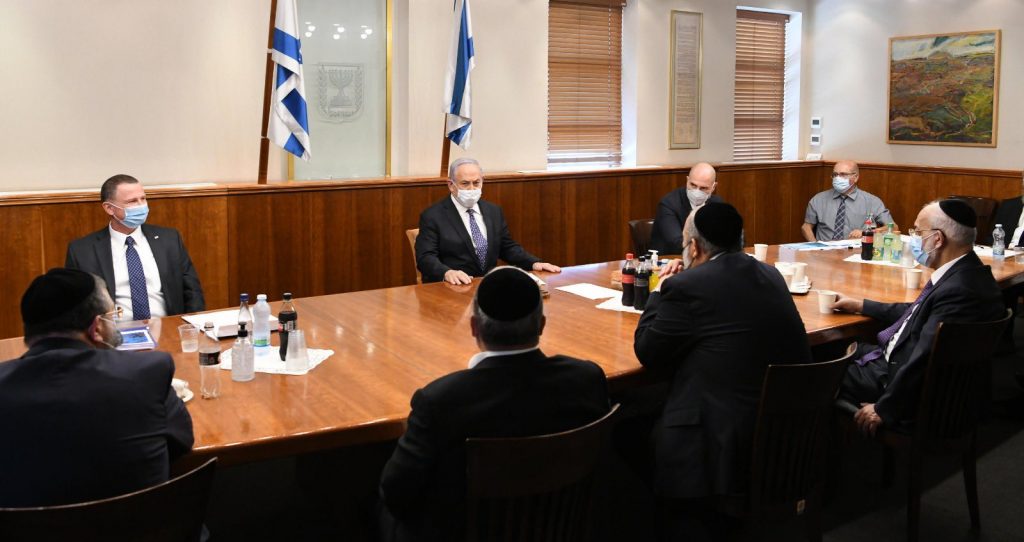 Prime Minister Binyamin Netanyahu held meetings with the MKs and ministers of Shas and UTJ on Monday morning over the coronavirus restrictions in chareidi cities and neighborhoods. The meetings were also attended by Health Minister Yuli Edelstein and Public Security Minister Amir Ohana.

During the meetings, it was agreed that prior to the imposition of any future closures, consultations will be made with public representatives of the chareidi communities and, as far as possible, control rooms will be opened in the localities themselves.

Netanyahu said, “I asked to meet you so we can hear your distress; I know it is real and it touches us. We want to help, no one wants to be harassed. The opposite is true, and I am open to listening.”

At the meeting with the UTJ MKs, Netanyahu asked the representatives to “take responsibility and lead, rather than to be led,” with regard to the chareidi public criticism of imposing closures on their neighborhoods.

The UTJ party, for its part, demanded that the prime minister establish a command center, which will also have representatives from the local authorities and the Home Front Command, in order to prepare properly before imposing any kind of closure.

The representatives also raised harsh allegations during the meeting about increased police enforcement in the chareidi areas.

At this stage of the conversation, Minister Ohana revealed that in his capacity as public security minister, which is in charge of the police, there was already a change of trend, and that the police officers were instructed to “calm things down.” He also noted that during a rally Sunday night in the Romena neighborhood of Yerushalayim, police did not raise a finger.

Deputy Minister Rabbi Uri Maklev turned to the prime minister and said sternly: “Our public has supported you, and we didn’t accept the media attacks against you, but we have now lost it. We are also accused of partnering with you.

“The public expects your action and intervention. We demand action, not talk.”

Rabbi Maklev added, “The chareidi community is the most affected from the corona, employers are not returning chareidi workers to the workforce. It harms us socially, economically and affects our public image.”

At the meeting with the Shas representatives, Interior Minister Rabbi Aryeh Deri told Netanyahu, “The closure, with no aid at all, does not achieve its purpose and harms the entire public.”

“The name of the game is transparency and partnership: to publish the criteria and information about the morbidity among the households, and not just a number of carriers, and to fully cooperate with the chareidi mayors and not just give a regular update,” MK Rabbi Yaakov Tesler said.