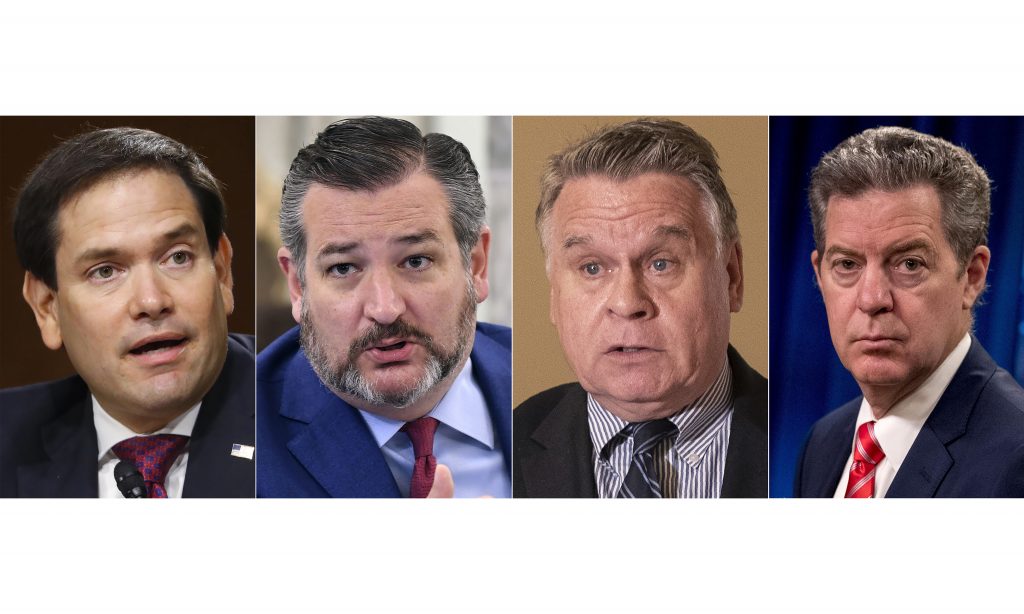 China said Monday it will impose sanctions on three U.S. lawmakers and one ambassador in response to similar actions taken by the U.S. last week against Chinese officials over alleged human rights abuses against Muslims in the Xinjiang region.

Senators Marco Rubio and Ted Cruz, Rep. Chris Smith and Ambassador for Religious Freedom Sam Brownback were targeted, as was the Congressional-Executive Commission on China. The four have been critical of the ruling Communist Party’s policies toward minority groups and people of faith.

Foreign Ministry spokesperson Hua Chunying said the U.S. move had “seriously damaged China-U.S. relations” and that China was determined to uphold its national sovereignty against what it sees as interference in its internal affairs.

“China will respond further according to the development of the situation,” Hua said.

She did not spell out the sanctions beyond saying they would correspond to the American ones. The U.S. prohibited any property transactions by Americans with four senior Chinese officials and barred three of them from entering the U.S.

There was no indication that any of the sanctioned Americans had plans to travel to China.

The sanctioned Chinese officials include Chen Quanguo, who heads the northwestern region of Xinjiang, where more than 1 million members of Muslim minority groups have been incarcerated in what China terms de-radicalization and retraining centers.

Critics have likened the camps to prisons to which inmates are sentenced with little due process and where they are compelled to denounce their religion, language and culture and pledge allegiance to the Communist Party and its leader, Xi Jinping.

Ties between China and the U.S. have deteriorated steadily over the coronavirus pandemic, human rights, Beijing policy toward Hong Kong and trade. The Trump administration has also slapped visa bans on Chinese officials deemed responsible for barring foreigners’ access to Tibet, along with those seen as enforcing a clampdown on civil rights in Hong Kong.

Despite such moves, former national security adviser John Bolton has alleged in a new book that Trump told Xi he was right to build detention camps in Xinjiang.

Additional visa restrictions are being placed on other Communist Party officials believed to be responsible for, or complicit in, the detention or abuse of Uighurs, Kazakhs and members of other minority groups.

They and their immediate family members are banned from entering the United States.

China has sought to crush any hint of separatist tendencies among Uighurs, which critics say amounts to a campaign of cultural genocide. Uighurs are mostly Muslim and their Turkic language, Muslim religion and central Asian culture make them distinct from China’s Han majority.

While China says it is bringing prosperity and development to the vast, resource-rich region, many among Xinjiang’s native ethnic groups say they are being denied economic options in favor of migrants from elsewhere in China.

Last December, Xinjiang authorities announced that the camps had closed and all the detainees had “graduated,” a claim difficult to corroborate independently given tight surveillance and restrictions on reporting in the region. Some Uighurs and Kazakhs have told the AP that their relatives have been released, but many others say their loved ones remain in detention, were sentenced to prison or transferred to forced labor in factories.

In October 2019, the United States imposed visa restrictions on Chinese officials “believed to be responsible for, or complicit in” the detention of Muslims in Xinjiang. It also blacklisted more than two dozen Chinese companies and agencies linked to abuses in the region — including surveillance technology manufacturers and Xinjiang’s public security bureau — effectively blocking them from buying U.S. products.

China’s officially atheist Communist government at first denied the existence of the internment camps in Xinjiang, but now says they are vocational training facilities aimed at countering Muslim radicalism and separatist tendencies.