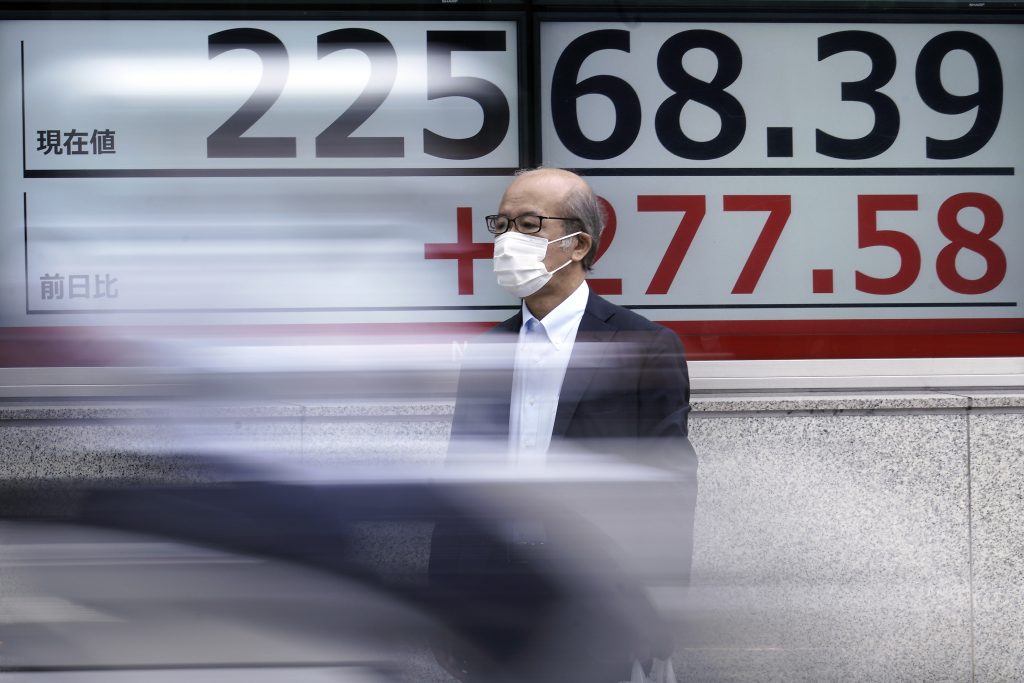 Shares rose in Asia on Monday, cheered by upbeat projections for a global economic rebound that were tempered by worries over expanding coronavirus outbreaks.

Investors were looking ahead to the release of China’s economic growth data for April-June, a key indicator for trade, manufacturing and investments with implications for the entire region. Singapore is also releasing GDP data.

Stocks rallied Friday on Wall Street at the end of a week of volatile trading amid worries that rising coronavirus counts may halt the recent upswing in share prices.

While investors are hoping for an improved outlook thanks to the reopening of the Chinese economy following its own early outbreaks, share prices are much higher than justified by the numbers, analysts said.

“I do not think there will be any way to sugarcoat a disastrous Q2,” said Stephen Innes of AxiCorp. “Still, I am not sure how significant the numbers will be given the premise that investors are paying a top premium for technology stocks based on 2021 rebound earnings.”

On top of central bank policy meetings in Japan and elsewhere, corporate earnings are looming.

“According to FactSet, the estimated earnings decline for the S&P 500 index sits at -44.6%, representing a whole different world compared to the S&P 500 index that is approximately 6% away from its previous all-time,” said Jingyi Pan of IG.

“Reconciliation between the two could take place going into the earnings season, although one suspects there may be some meeting in the middle here,” Pan said. “Better-than-expected recovery on the U.S. economic data front had so far inspired some convictions that the bar may have been set too low.”

After starting Friday with modest drops, stocks and Treasury yields erased their declines to drive higher. In a signal of rising expectations for the economy, the Russell 2000 index of smaller stocks rose more than the rest of the market, up 1.7%.

Last week’s meandering was a microcosm of the up-and-down churn that stocks have been stuck in for a little more than a month. The market’s momentum has stalled since early June, after the S&P 500 roared back to recover most of an earlier 34% plummet. Massive amounts of aid from central banks and governments around the world have ignited the rally.