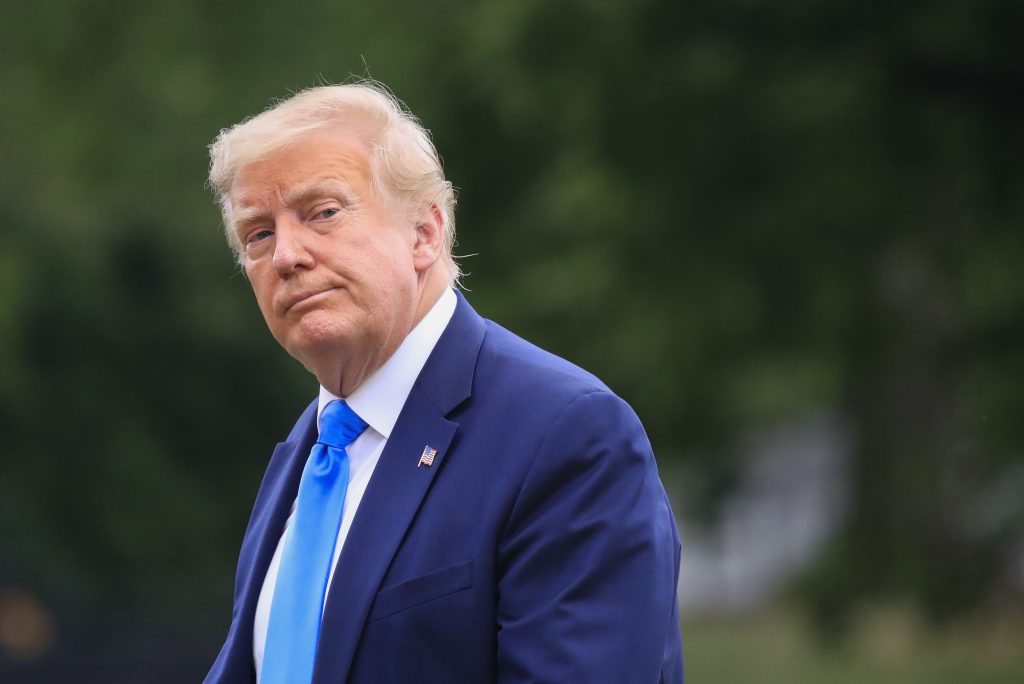 President Donald Trump’s management of this summer’s crises has triggered what Democrats detect as a tectonic shift in the political landscape, with party leaders suddenly bullish about not only taking back the White House but also wresting control of the Senate, as well as expanding their House majority.

President Trump’s incumbent advantages have steadily eroded since the spring, with the president now trailing presumptive Democratic nominee Joe Biden in virtually every public poll nationally and in battleground states, as well as lagging behind the former vice president in fundraising for May and June.

Trump and his advisers insist that their campaign’s internal data show the race as more competitive — “In the real polls, we are doing very well,” the president claimed Friday — and that he can gain momentum in the weeks ahead with a disciplined message and a brutal, sustained assault on Biden’s character, ideology and mental acuity.

Yet Trump has never shown much discipline, and time and again this year, he has stymied his campaign’s best efforts with bouts of seeming self-sabotage. On Friday night, Trump provoked critics anew with his decision to commute the prison sentence of longtime confidant Roger Stone, an act Sen. Mitt Romney, R-Utah, called “unprecedented, historic corruption.”

With the coronavirus pandemic still raging across much of the country, Biden enjoys a commanding position, though his campaign advisers say nothing is yet secured and they are careful not to take any state for granted.

Both Democratic and Republican operatives increasingly view Trump as a drag on GOP candidates in many key Senate and House races — especially in suburban areas, where polling and focus group data suggest he has been bleeding support.

Voters’ disapproval of Trump’s handling of the pandemic and of the racial justice movement, as measured in public surveys, has buoyed Democrats down the ballot. Some long-shot Democratic challengers in Kentucky, South Carolina and other Republican strongholds reported staggering fundraising hauls in recent days, which party leaders see as a sign that their playing field could expand further.

Schumer said “we’re feeling very good” about winning the three or four seats required for Democrats to gain control of the Senate for the first time in six years.

House Speaker Nancy Pelosi, D-Calif., said in an interview that if the election were held today, Democrats would pick up seats and expand their majority. But she cautioned that Trump remains popular in a number of congressional districts in traditionally Republican areas that Democrats captured in the 2018 midterm elections, despite his collapse elsewhere, which endangers those incumbents.

“For reasons that are beyond my comprehension, he still has some favorability in these districts, and so the question is: In the last election, did people stay home because he wasn’t on the ballot and now turn out because he is on the ballot and they support him?” Pelosi said. “It’s the strangest phenomenon I have ever seen in politics.”

Pelosi said she has warned fellow Democrats not to let down their guard. “I say: ‘Own the ground. Don’t give one grain of sand. Get everybody out.'” And Pelosi predicted that Trump and his allies would work to suppress access to the polls or create other obstacles for black people and other loyal Democratic voters.

“One advantage we have this time over the last is people are vigilant, they are attuned, they are concerned,” Pelosi said.

“There’s so much Democratic psychological energy warped by Trump’s gravity field,” Murphy said. “Now they’re having this exhilaration. Ninety percent of the political gestalt is set by public polls, and the polls show Trump’s going to lose, we can all relax, it’s over. But I would say, ‘Caution! Elections are very dynamic.’ ”

Biden leads Trump by nine percentage points among registered voters in a Washington Post average of national polls conducted since mid-June. He also leads the incumbent, in some cases outside the margin of error, in recent polls in the battleground states of Arizona, Florida, Michigan, North Carolina, Pennsylvania and Wisconsin.

“The president is in a very, very deep hole, and I’m not quite sure how he gets out of it,” said Amy Walter, national editor of the Cook Political Report, which on Wednesday shifted a number of states in its electoral college ratings in Biden’s favor.

“He is taking with him Senate and House candidates,” Walter added. “Instead of just a slight drag, the president is tying anchors around the ankles of Republican candidates.”

Michael McAdams, spokesman for the National Republican Congressional Committee, countered: “President Trump at the top of the ticket remains a massive advantage for Republicans in the 30 Trump districts House Democrats are defending.”

But other GOP strategists privately disagree and worry about Trump dragging down the party, though they said they were hopeful that the electorate snaps back to a more even partisan split by the fall.

“He needs to be talking about the accomplishments before the pandemic took hold, where we were, why the positive economy was because of his policies, and why what Democrats propose is not going to work,” Barbour said.

For weeks now, White House officials and Trump campaign surrogates have been arguing that the president is better positioned than Biden to rebuild the economy after the pandemic, a message they hope resonates with some of the voters who polls show have peeled away from him.

Jason Miller, a Trump campaign senior adviser, argued that the president’s base is more motivated to turn out than Biden’s, and that Trump has “a lot of room to grow.” He likened Trump’s performance the past few days to his “razor sharp” focus in the home stretch of the 2016 campaign.

Central to Trump’s efforts ahead is an all-out assault on Biden. Miller said the Trump campaign believes several lines of attack are potent, including that Biden lacks the mental sharpness for the job, that he is beholden to liberal activists and that he would “throw the country into a U-turn” by undoing Trump’s economic policies.

“Joe Biden is very undefined,” Miller said. “Even though he’s been in office for decades, people don’t know Joe Biden, and they definitely don’t know this iteration of Joe Biden. … His radical, left-wing friends have to prop him up and wheel him around …. ”

Anita Dunn, a Biden campaign senior adviser, said Trump and his allies have been attacking Biden for the past year without much success.

“The idea they haven’t had time to define Joe Biden yet is ludicrous,” Dunn said. “This president got himself impeached by trying to define Joe Biden in a negative way. … The problem that Donald Trump has is that he has been defined for the American people, and the American people don’t like a president who they think puts himself ahead of their interests, who doesn’t listen to experts and who has made a bad situation a catastrophe.”

Dunn argued that the election would come down to the issue of presidential leadership.

“When Joe Biden makes a speech, when he addresses an issue, he is being the president people want,” she said. “He’s working to unify people. He’s honest about the challenges facing us, but optimistic about our ability to address them if we all work together.”

“There’s a tsunami coming,” said Terry McAuliffe, a former Virginia governor and former Democratic National Committee chairman. “If he’d early on jumped in front of the coronavirus and been a leader, this guy would’ve been unbeatable. But every opportunity he’s had to stand up and be a leader, whether Charlottesville or anything else, he’s failed each time.”

The danger for Trump will be if the voters he lost are not willing to come back. Democratic pollster Peter Hart said this is the case, based on his extensive focus group interviews.

“Voters have arrived at a place that they’re done with Donald Trump,” Hart said. “The last four years have been total chaos, and the public says: ‘Stop the music. I want to get off.’ ”

The prospects for Senate Republicans have darkened in recent weeks as coronavirus cases rise in dozens of states. Though the battle for Senate control is largely being waged in a half-dozen states, Republicans are having to fend off well-funded opponents elsewhere as well.

GOP officials feel secure about McConnell and Graham winning re-election, though Montana and North Carolina appear more competitive. The one race so far where a Republican candidate has outraised a Democratic incumbent is in Michigan, where John James collected $6.4 million against Sen. Gary Peters.

Republican officials believe the dynamics could shift once scrutiny increases on the Democratic Senate candidates. But there remains notable concern about Republican incumbent Sens. Martha McSally of Arizona, Cory Gardner of Colorado and Susan Collins of Maine. Recent polls show the races tightening for Sen. Joni Ernst, R-Iowa, and Tillis, both in states that Trump carried four years ago but could lose this time. Republican officials also have been watching the two Senate races in Georgia, especially as that state becomes more competitive on the presidential level.

“This is shaping up to be a lot like four years ago — with challenging states, a massive Democratic spending advantage and a class of sharp Republican senators who pushed through to win at the end,” said Steven Law, president of the Senate Leadership Fund, the main super PAC dedicated to electing Republican senators.

As recently as Trump’s February acquittal in his impeachment trial, House Democrats were nervous about losing some seats, but now they see pickup opportunities, thanks to Trump’s sinking approval ratings in suburban areas. Democrats are eyeing Republican-held districts in Georgia, Indiana, Missouri, New York, Pennsylvania and Texas, as well as long-shot opportunities in Alaska and Montana.

The most concentrated state is Texas, where Democrats are targeting seven GOP-held districts, including the suburban Houston district once represented by former House Republican leader Tom DeLay. Democratic strategists believe the spike in coronavirus cases across Texas could further erode Trump’s standing with voters in those districts.

“The world is changing,” said Abby Curran Horrell, executive director of the House Majority PAC, a super PAC helping elect House Democrats. “What we’re seeing is this president is just a drag on these Republican candidates, and it’s just tough to get around that. And we’re seeing it across the map.”