In talks in Doha and in Kabul, the Taliban’s leaders have struck a conciliatory tone: Issues of human rights, democracy and power sharing are open for discussion, they said, and will be worked out during peace talks with the Afghan government.

But here, in one of the terrorist group’s long-held districts in eastern Afghanistan, Taliban commanders and fighters speak not of peace but of toppling the Afghan government in Kabul. They boast of a hard-fought “military victory” over American forces in the country.

“We will only accept 100% of power in Afghanistan,” said Yaser, a 26-year-old Taliban fighter from the Marawara district whose comments were echoed by his commander and others in the area. Yaser, like many Afghans, goes by a single name.

The competing visions of a postwar Afghanistan within the Taliban’s ranks reveal the difficult task facing the group’s leaders as they seek to rally support for an agreement with the government in Kabul ahead of long-awaited formal talks. Many fear that even with a peace deal, a fractured Taliban could lead Afghanistan back to a period of perpetual violence.

It’s difficult to discern how widespread the views expressed by these Taliban fighters are in other parts of Taliban-controlled Afghanistan because access to those areas is severely restricted. Washington Post reporters traveled into the Taliban district in eastern Afghanistan with the permission of the terrorist group this month. Taliban fighters escorted Post journalists in the district to interview civilians and visit a school and a clinic.

Throughout the trip, Taliban fighters and supporters emphasized the importance of continuing the fight against the Afghan government to assume full control of the country. But even in the relatively small district of Marawara, which has largely been under Taliban control for more than nine years, the group had little to show in the way of governance.

Key services such as education and health care in Marawara are funded by the Afghan government, even though the district lies beyond government control.

The Marawara district, in Konar province, is wedged between the government-held town of Asadabad and the border with Pakistan. It is entirely rural and deeply impoverished. Most young men here seek work as day laborers in nearby government-held towns and cities, and the families who stay in Marawara subsist by farming small plots of land and raising livestock. 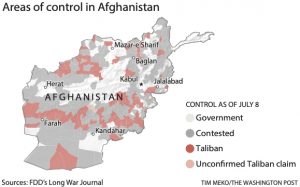 Along the side of the district’s main road — a dirt and rubble track running along a steep mountain — a cluster of Taliban fighters in mismatched fatigues gathered to pose with automatic weapons and white flags. They chanted “death to the American slaves,” referring to the Afghan government, and “death to Ashraf Ghani,” the Afghan president.

As the United States draws down its forces, the fighters said it is only a matter of time before they take full control of the country. One of the district’s commanders described the signing of the peace deal in February as the fulfillment of “a dream” to defeat “the infidels.”

Yaser, the fighter, stood among the group, clutching a modern American M4 rifle outfitted with a thermal scope. He said he captured the weapon during an attack on an American base in Kandahar or Helmand. The U.S. military command in Kabul and the Afghan military did not respond to questions about weapons taken by terrorists from coalition bases.

The group’s “military victory” over U.S. forces, Yaser said, was just one reason the Taliban deserved to control the country.

“It’s unacceptable to divide power,” he said, “and it’s not possible to have a divided Islamic government.” He said that if Taliban leadership in Qatar agrees to share power, he and his men will break from the movement and take up arms independently.

Amanullah Arabii, a 30-year-old Taliban commander from Marawara, agreed, and said he believes the goal of direct talks between the Taliban and the Afghan government is the “complete destruction” of the government so an Islamic country can take its place.

Throughout more than a decade of informal and later formal talks with the United States, the Taliban maintained command and control of fighters on the ground by refusing to yield on issues that would risk the group’s internal cohesion. But a political settlement with the Afghan government probably will require more controversial concessions, such as explicitly defining human rights, civil liberties and democracy.

Taliban leadership has “a mammoth undertaking up ahead in terms of getting the rank and file on board with what a political negotiated settlement means,” said Andrew Watkins, a senior Afghanistan analyst for International Crisis Group. Building that consensus “will require a huge amount of persuasion and explanation . . . and it’s intentional that they haven’t done any of that yet,” he said.

Taliban leaders feared that beginning conversations about political compromise too early would risk more of the group’s 50,000 to 100,000 fighters breaking away and joining other terrorist organizations that pledge to continue violent resistance regardless of a peace deal, Watkins said.

Civilians living in Marawara point to the question of violence and insecurity as one of the reasons they’ve remained in Taliban territory: They trust the terrorists to provide better security than the Afghan military. But what they’re lacking – and what they say they hope to see in a post-war era – is improved services like paved roads, health care and education.

Like most territory held by the Taliban, Marawara relies on the Afghan government and aid groups for health and education services. But insecurity often delays the delivery of essential goods such as medicine and salary payments to doctors and teachers. Staff members at the district’s only clinic in Taliban-controlled territory report that they have not received their government salaries in more than eight months.

Inside the small mud-brick clinic, four women, all in their 20s, waited for the doctor to arrive from a nearby government-held town. No doctor lives in Marawara district, so one travels into Taliban-controlled territory for a few hours a day to see patients. For months, the clinic has been unable to find a surgeon to do the same.

With the doorway covered by a thick blanket and without electricity, the room was dark. Most of the women cradled crying infants, one nursing between sobs.

“We don’t know what’s wrong with them,” said Yasmin, 22, holding her 6-month-old son, the youngest of her five children. Inside the privacy of the clinic, the women could reveal their faces, lifting the blue head-to-toe coverings they are required to wear when leaving the home. Their male guardians waited for them outside in a courtyard.

“With peace, we hope this clinic will receive better medicine from the government,” she said, explaining that medicine in syrup form for children is rarely available and her family is too poor to travel into government-held territory to visit a pharmacy.

Across a valley and atop another hill, under the shade of a row of thick trees is Marawara’s primary school. Four groups of boys and girls sat on plastic woven mats hunched over tattered practice books as teachers and pupils took turns leading classes through exercises written on chalk boards held up by easels.

The school has been unable to get funds to construct a building, so classes are held in the open air, according to the head teacher, Sayyed Tariq. Like the clinic, the school’s supplies and employees are paid for by the government in Kabul. The students learn from government textbooks, but teachers say they don’t receive as much funding as schools in government-controlled areas of the country.

“If peace comes, we are hoping for development to build a school,” said Tariq.

He said he hoped greater freedom of movement would also allow girls in Marawara to continue their education past primary school. Students are required to segregate by gender as teens, but the district lacks a female high school teacher, which means girls cannot attend high school. It is a self-perpetuating problem: Most of the teachers in Marawara like Tariq are originally from the district, and the current system makes it impossible for a local woman to become a teacher.

Tariq, like most civilians in Marawara, said he expected the Taliban to assume full control of the Afghan government once U.S. forces withdraw. But when asked what that would mean for the funding and supplies his school relies on, he eyed the Taliban fighters observing the interview and replied, “You and I both know I cannot answer that question.”

In a small village square across from a modest mosque, a group of men and children milled about after prayers. Most of the men were jobless, forced to return to the district from Afghanistan’s cities when coronavirus lockdown measures dried up work for day laborers.

The men in the group said they largely supported power-sharing between the Taliban and the Afghan government, but believed the most inevitable outcome would be the Taliban taking full control of the country.

Nissar Burhan, 49, the Taliban administrator of the small mud brick clinic, said once the Taliban abolishes the Afghan government and assumes power, he expects conditions at the clinic to improve.

“Right now, we are still in the middle of the fight, so we haven’t had a chance to provide services,” Burhan said. “When the Taliban rise up, they will take these new responsibilities.”