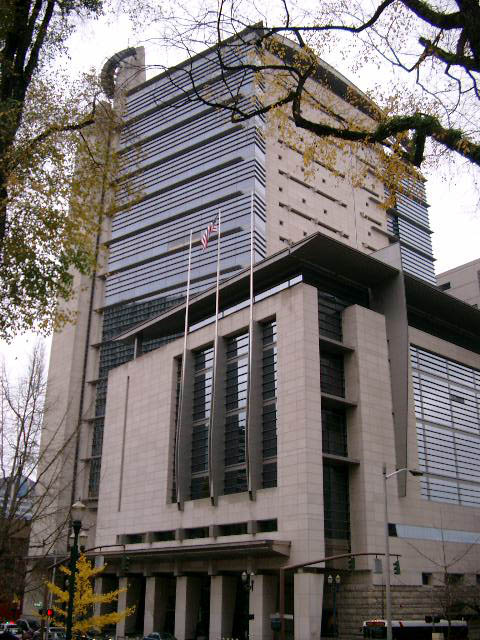 Federal officers at the Mark O. Hatfield U.S. Courthouse asked for help from city police at about 2 a.m. Sunday after some protesters resisted arrest and some threw bottles, the Portland Police Bureau said. Announcements were made for protesters to leave the area and the crowd dispersed around 3:20 a.m., police said.

Some fires were started in trash cans and dumpsters but no buildings were threatened, police said. One person was arrested on suspicion of unlawfully pointing a laser.

Blood was splattered on the street and sidewalk across from the courthouse earlier in the protest, where a witness said a man had been hit on the left side of his head, KOIN-TV reported. Jessica Schifflett told the station she did not see what hit him.

“It caused a pretty deep laceration, but he was bleeding from his nose, his mouth, his ears — it was pretty bad,” she said.

On Friday, one person was taken into custody after hitting a federal officer in the head and shoulder with a hammer during a protest at the nearby Edith Green-Wendell Wyatt Federal Building. No details were released about the officer’s injuries. Several other people accused of pointing lasers into the eyes of federal officers were also taken into custody.

The Department of Homeland Security has deployed officers in tactical gear from around the country, and from more than a half-dozen federal law enforcement agencies and departments, to Portland as part of a surge aimed at what a senior official said were people taking advantage of demonstrations over the police killing of George Floyd to engage in violence and vandalism.