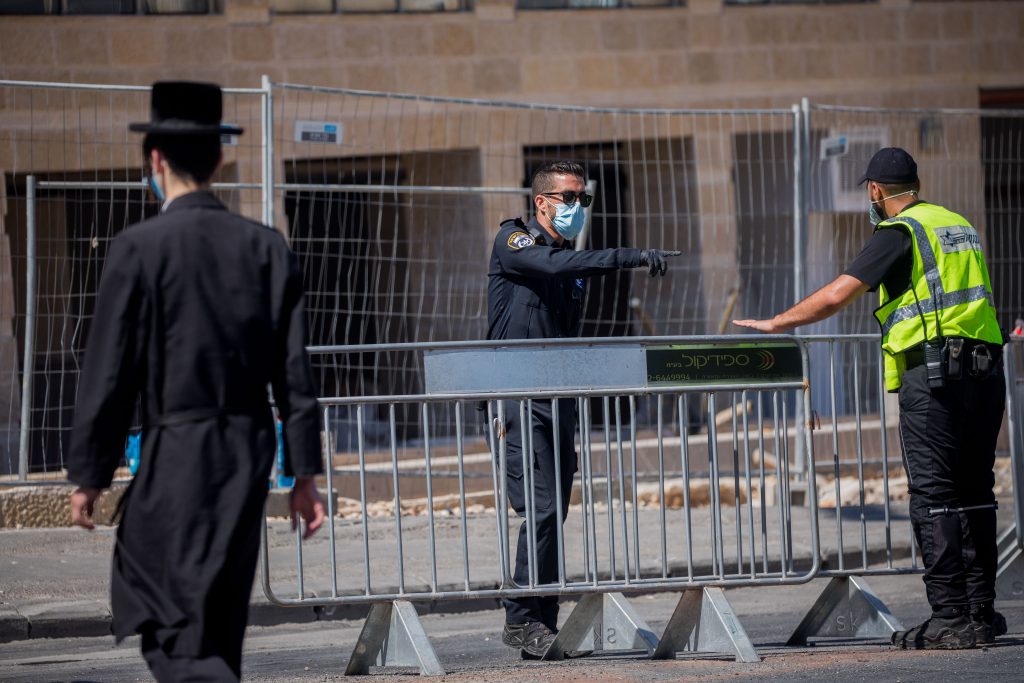 Chareidi MKs and ministers decried the discrimination on the chareidi community in the recent lockdowns, as well as the enforcement of the regulations in a much harsher and more violent manner than in other cities.

MK Rabbi Eliyahu Chassid (United Torah Judaism) spoke out Sunday morning against the police due to the seeming selective enforcement against the chareidi community. He attacked the police and threatened that “there will be chaos here; people will not go to be tested.”

In his remarks, MK Rabbi Chassid said: “The closures imposed on certain areas are useless, without bringing the residents the information they need to understand the lockdown. Why enforce a closure on Beit Shemesh and not in Raanana where there are the same numbers of infections? People have not seen the numbers, the public have lost trust in the authorities. This will cause complete chaos, and people will prefer not to go to be tested.

“Instead of acting with a merciful hand, the police behaved brutally and disrespectfully and this doesn’t help at all to build trust between the public and the police.”

He added: “There is a problem here that the information is not brought to the public as to why a closure is being made here and why a closure is not being made there. The idea to send the patients to a corona hotel can help solve the problem, but the hotel solution does not exist, and is more talk than reality.

At the Cabinet meeting Sunday, Interior Minister Rabbi Aryeh Deri (Shas) spoke out furiously at what he called “selective enforcement against the chareidi public.”

“It seems there is deliberate violence by police against chareidi demonstrators. This must stop,” Rabbi Deri declared.

“On Friday, the heads of the chareidi parties met with the Public Security Minister, Amir Ohana. Minister Ohana was attentive but the violence continued. As a representative of a chareidi party in the government, I will not be able to come to terms with the severe violence of the police against the chareidi public. It must stop immediately.”

“The pictures from the liberated Tel Aviv and the besieged Yerushalayim speak for themselves: secular people can gather and protest, while chareidim cannot,” said UTJ MK Rabbi Yisrael Eichler. “Whoever still thought until today that there are human rights for chareidi people in the land of Israel, revealed today again the bitter truth: a charedi person is a citizen lacking human rights in the Jewish state.”

“I have now gone through a variety of videos from the two demonstrations, and the difference in the conduct of the police is shocking. There was zero patience and harsh violence against the chareidi demonstrators in Yerushalayim, while they showed caution and maximum restraint towards the demonstrators in Tel Aviv,” Smotrich wrote on Sunday morning.

“Note the difference between the styles of the police spokesperson announcements. This is blatant and open discrimination and should be followed up on by an inquiry commission,” Smotrich wrote.