Politics Biden’s Vision Comes Into View, and It’s Much More Liberal Than It Was
Politics 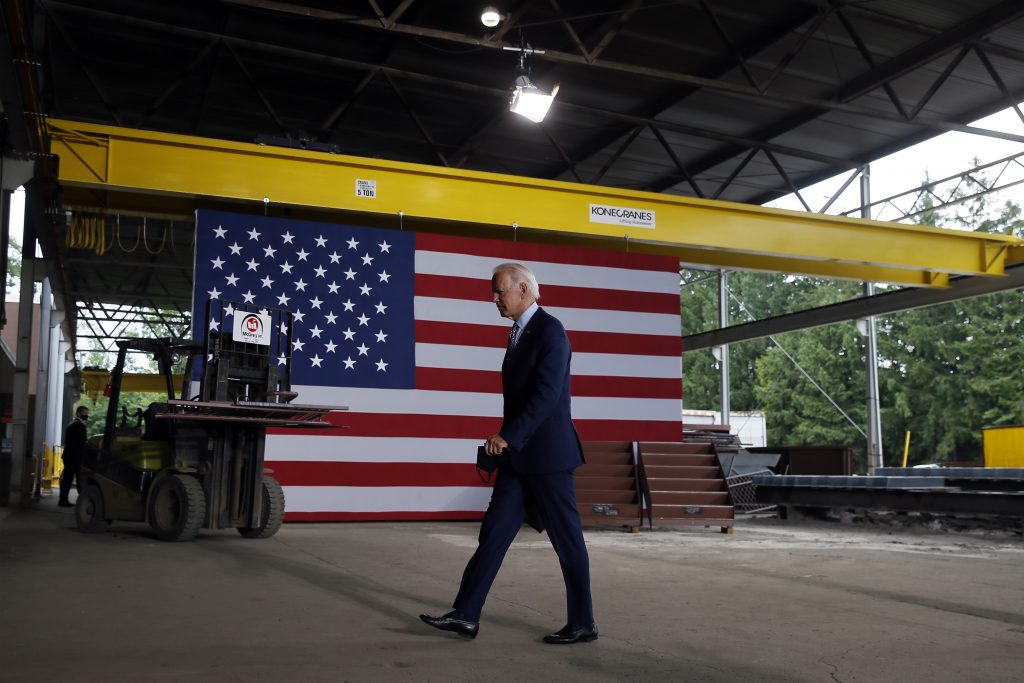 Joe Biden is looking at building 500 million solar panels, slashing U.S. carbon emissions within 15 years, and rapidly expanding a government-sponsored health-care plan. He wants to overhaul the way policing is conducted on American streets and the way success is measured in primary schools.

Over the past week, the presumptive Democratic nominee has offered the biggest burst of policy proposals since he effectively won the nomination, including a plan to spend $700 billion on American products and research. It marks a significant move to the left from where Biden and his party were only recently — on everything from climate and guns to health care and policing — and reflects a fundamental shift in the political landscape.

The new plans, which have come in speeches, interviews, and a 110-page policy document crafted with allies of Sen. Bernie Sanders, I-Vt., provide a window into how Biden would govern, and they kick off a new phase in a campaign that until now has focused mostly on President Donald Trump’s performance. As Biden releases more plans — including one on climate and clean energy investments this week — he appears to be drafting a blueprint for the biggest surge of government action in generations.

“I think the compromise that they came up with, if implemented, will make Biden the most progressive president since FDR,” Sanders, a democratic socialist who does not offer such assessments lightly, told MSNBC.

It’s a remarkable turn for a candidate who was once defined by incrementalism but is now attempting to show voters how he’d grapple with tens of thousands of Americans dying from a global pandemic, an economy in tatters, and a country wracked by a reckoning over racism.

“The primary was largely litigated in a pre-COVID, pre-George Floyd moment,” said Abdul El-Sayed, a physician and liberal activist from Michigan, referring to the man whose death in police custody ignited weeks of protests. “To try and run in the general on the primary’s precepts I think would be missing this immense moment in American history,”

El-Sayed, one of the Sanders supporters who helped craft Biden’s new policy document, said the candidate must present a vision and not rely on President Trump to self-immolate. “The failure in the tactic that Donald Trump is going to bury himself, and we just to be the antithesis of him — 2016 shows us that didn’t work,” he said. “We’ve really got to be framing who we are.”

In the crowded Democratic primary, Biden was widely seen as the most moderate candidate and was often criticized for his stated willingness to work with Republicans and forge compromise. As he now attempts to harness the liberal energy that has erupted in recent months, he also faces pressure not to alienate independents or disaffected Republicans.

The former vice president has relied on his political instincts amid a rapidly shifting climate and has made himself a slippery target for Trump and his allies, often finding a middle path on volatile issues. Biden has favored the removal of monuments to Confederate generals, for example, but opposed tearing down statues of slave-owning Founding Fathers such as Thomas Jefferson and George Washington.

Similarly, Biden opposed the “defund the police” movement pushed by some in his party while still arguing that funding for police departments should be redirected to other services such as mental health and counseling. He also said police forces are too heavily armed with military equipment.

“The last thing you need is an up-armored Humvee coming into a neighborhood,” he said in an interview with activist Ady Barkan that aired last week. “It’s like the military invading. They don’t know anybody. They become the enemy. They’re supposed to be protecting these people.”

Biden has also walked a fine line on fracking, a process used to access underground natural gas and oil that environmentalists broadly oppose. Liberal Democrats have pushed for an outright ban on fracking, while centrists have warned of potential job losses in states such as Ohio and Pennsylvania.

Biden says he would allow current fracking projects to move forward while banning future permits on federal land, telling WNEP in Scranton, Pa., last week that “fracking is not going to be on the chopping block.”

“He’s very, very practical. We have billion-dollar fracking plants in western PA,” said Rep. Tim Ryan, D-Ohio, one of Biden’s former presidential primary opponents. “He’s not going to step in the middle of that because certain people want a complete ban.”

“You’ve got to understand how things that are said and done at the highest level hit the ground — in a way that Trump doesn’t, or in a way that frankly some Democrats don’t,” Ryan said. “Some Democrats like the ‘Defund the police.’ No one is for that, and Biden has the guts to say it. … He can be against racism and abuse while not throwing every cop under the bus at the same time.”

If Biden is elected, of course, his agenda will be shaped by dynamics that are now unforeseeable — whether Democrats recapture the Senate, whether the country’s mood has shifted, the trajectory of efforts to fight the pandemic and rebuild the economy.

But Biden has suggested he believes something fundamental has changed in the country in recent weeks, and he has held regular talks with advisers inside and outside the campaign in an effort to reorient his policies to meet the moment.

Rev. William Barber, a preacher and advocate for the poor who has pushed Biden to be bolder, said he has been pleasantly surprised by some of Biden’s rhetoric, particularly his willingness to connect economic policy with racial justice.

“He recognizes he’s in a moment that is a big moment, and it’s a moment of great possibility,” Barber said. “There’s a mourning and a hurting in this country. If he connects and builds policy around that, it will be a powerful reconstruction, if you will, of the American society that is long overdue.”

Biden has rarely mentioned middle-class tax cuts, long embraced by Democrats as a way to win over centrist voters, instead calling for the government to do more on housing and health care. That has provided fodder for Republicans who say his plans would make government far more intrusive into the lives of ordinary Americans.

GOP leaders are coalescing around a message that the once-centrist Biden has been bullied by the left into adopting its radical agenda.

He compared Biden to the dictator Nicolás Maduro in Venezuela. “Now Joe Biden and the radical left are trying to impose the same system – socialism plus – in America,” the president said. “Biden is a puppet of Bernie Sanders, AOC, the militant left.”

AOC is a reference to Rep. Alexandria Ocasio-Cortez, D-N.Y., a former Sanders supporter who co-chaired a Biden-Sanders task force on climate change.

That task force was one of six such groups that were jointly formed two months ago by allies of Biden and Sanders. Their policy document released last week offers a lengthy list of recommendations, many of which Biden is expected to adopt.

Fierce debates erupted on some of the task forces, participants said, with tensions flaring, particularly in the criminal justice group. The disputes were less over the policies themselves, they said, and more over whether Biden could be persuaded to reshape his longtime views.

The Sanders allies, for example, wanted Biden to support an end to “qualified immunity,” a legal doctrine that makes it harder to prosecute police officers. They also wanted him to support legalizing marijuana. They were told Biden would not budge.

“This country has played the middle road a little too much, and it’s led to where we are at now,” said Justin Bamberg, a South Carolina lawmaker who was on the criminal justice task force. “The only way to fix it is to take a big step. I would have liked to see the policy go further. Times have changed, and Joe Biden is not there yet.”

Still, he praised the presumptive nominee for agreeing to make federal grants dependent on whether police departments adopt stringent rules on the use of force. And he is pleased that Biden has supported a ban on police chokeholds.

“That is a very, very, very big deal, especially with everything going on right now,” Bamberg said. “He is definitely responsive and listening to the other half of the party.”

The Health Care Task Force was filled with Sanders allies who supported the senator’s signature Medicare-for-all plan. That was a non-starter for Biden, but he was pushed to alter his plan for a government-run public option, so that it would provide at least one plan without deductibles and would be administered by Medicare rather than private companies, among other things. (Biden had previously proposed automatically enrolling low-income people for free, and in April he committed to lowering the Medicare eligibility age from 65 to 60.)

“This is a very different plan than the one he came in (with),” El-Sayed said. “It’s not Medicare-for-all, but the issue had been litigated over and over. So we said, ‘OK, if we can’t win the frame, let’s win the contents of the frame.’ And that’s what we got.”

El-Sayed said that while Biden is not moving as far left as he and other liberals want, it is nonetheless an unmistakable shift for a politician who has evolved over nearly a half-century in politics, often mirroring the Democratic Party’s worldview at any given moment.

“I believe this is an opportunity to say to progressives, ‘We’re not sprinting in the direction you want to go, we’re not throwing touchdown passes, but we are … moving forward,” El-Sayed said. Biden, he added, “often recognizes where things are moving and he moves with them. He sees this moment is not going to be kind to the same old approach. It’s a different moment.”

Biden also appears poised to push for more far-reaching plans on climate change. He declined to adopt the sweeping Green New Deal pushed by Ocasio-Cortez and others, and his unwillingness to endorse a complete ban on fracking has frustrated environmental activists.

But some climate groups are pleased with the task force recommendations, particularly earlier benchmarks for cutting greenhouse gases that could be hit by 2030 or 2035. They are waiting for Biden to unveil new policy proposals this week, hoping he will articulate a broader vision and propose more federal spending.

Biden has spoken with Gov. Jay Inslee, D-Wash., who ran a presidential campaign focused sharply on climate change, and former Inslee advisers have been working with Biden’s campaign.

Inslee also worked with Biden more than a decade ago, when the Obama administration used an infusion of stimulus spending to provide more than $90 billion in clean energy projects and tax incentives.

“I believe we will see a much more ambitious scale and scope,” Inslee said in an interview. “I have believed this for a long time. But from what I’ve seen, he has grasped its importance.”

The economic downturn makes the idea of creating clean energy jobs all the more critical, Inslee said, and he expects Biden to cast his energy plan as another way to address the country’s economic and racial disparities.

“Rarely do you have a confluence of events that makes things both necessary and politically possible in such a resonant way,” Inslee said. “This is not a peripheral issue. It does appear as a central part of his mission statement, and he’s demonstrated that.”