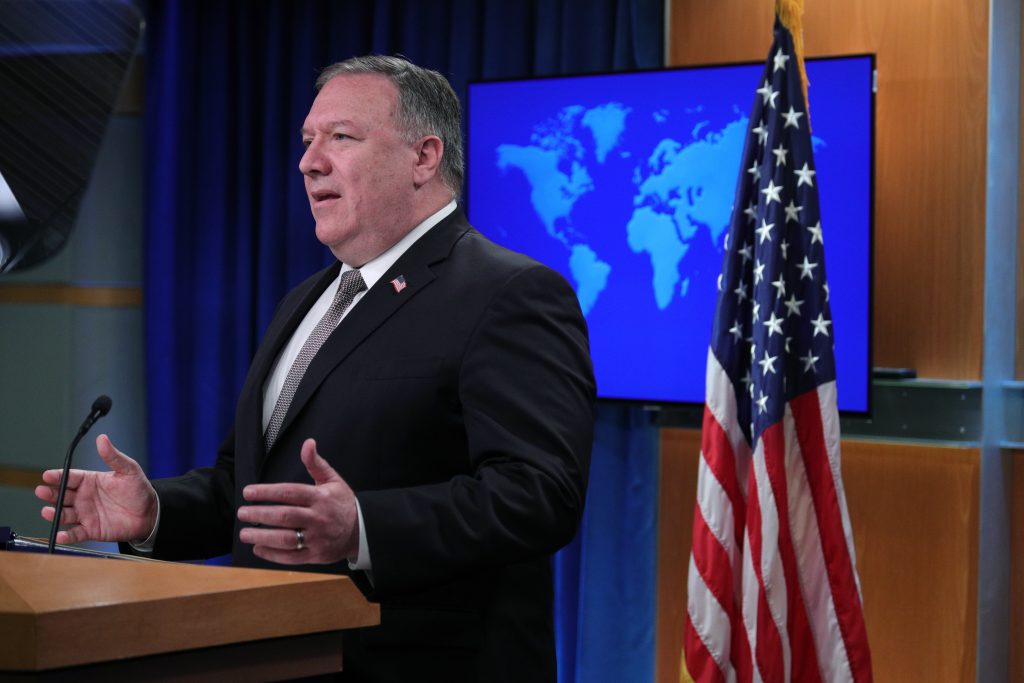 The United States on Thursday imposed sanctions on three senior officials of the Chinese Communist Party, including a member of the ruling Politburo, for alleged human rights abuses targeting ethnic and religious minorities that China has detained in the western part of the country.

The decision to bar these senior officials from entering the U.S. is the latest of a series of actions the Trump administration has taken against China as relations deteriorate over the coronavirus pandemic, human rights, Hong Kong and trade. Just a day earlier, the administration had announced visa bans against officials deemed responsible for barring foreigners’ access to Tibet. Thursday’s step, however, hits a more senior level of leadership and is likely to draw a harsh response from Beijing.

“The United States will not stand idly by as the Chinese Communist Party carries out human rights abuses targeting Uighurs, ethnic Kazakhs and members of other minority groups in Xinjiang, to include forced labor, and arbitrary mass detention, , and attempts to erase their culture and Muslim faith,” Secretary of State Mike Pompeo said in a statement.

Pompeo’s statement, accompanied by a similar announcement from the Treasury Department, said additional visa restrictions are being placed on other Chinese Communist Party officials believed to be responsible for, or complicit in, the unjust detention or abuse of Uighurs, ethnic Kazakhs and members of other minority groups.

The measures imposed against senior Chinese officials come as President Donald Trump has increasingly sought to blame China for the spread of COVID-19 in the United States and beyond and accuse his presumptive challenger in November’s election, former Vice President Joe Biden, of being soft on China.

They and their immediate family members are banned from entering the United States.

Pompeo also announced that he was placing additional visa restrictions on other Chinese Communist Party officials believed to be responsible for or complicit in “unjust detention or abuse” of Uighurs, ethnic Kazakhs and members of other minority groups in Xinjiang. Their family members also are subject to the travel restrictions.

In recent years, the Chinese government has detained an estimated 1 million or more ethnic Turkic minorities. The ethnic minorities are held in internment camps and prisons where they are subjected to ideological discipline, forced to denounce their religion and language and physically abused. China has long suspected the Uighurs, who are mostly Muslim, of harboring separatist tendencies because of their distinct culture, language and religion.

China’s officially atheist Communist government at first denied the existence of the internment camps in Xinjiang, but now says they are vocational training facilities aimed at countering Muslim radicalism and separatist tendencies.

China says Xinjiang has long been its territory and claims it is bringing prosperity and development to the vast, resource-rich region. Many among Xinjiang’s native ethnic groups say they are being denied economic options in favor of migrants from elsewhere in China and that their Muslim faith and unique culture and language are being gradually eradicated.

Last December, Xinjiang authorities announced that the camps had closed and all the detainees had “graduated,” a claim difficult to corroborate independently, given tight surveillance and restrictions on reporting in the region. Some Uighurs and Kazakhs have told the AP that their relatives have been released, but many others say their loved ones remain in detention, were sentenced to prison or transferred to forced labor in factories.

In October 2019, the United States imposed visa restrictions on Chinese officials “believed to be responsible for, or complicit in” the detention of Muslims in Xinjiang. It also blacklisted more than two dozen Chinese companies and agencies linked to abuses in the region — including surveillance technology manufacturers and Xinjiang’s public security bureau — effectively blocking them from buying U.S. products.

Last month, President Trump signed legislation, passed with overwhelming support from Congress, mandating that individuals, including Chen, face sanctions for oppressing Uighurs. The law also requires that U.S. businesses and individuals selling products to or operating in Xinjiang ensure their activities don’t contribute to human rights violations, including the use of forced labor.