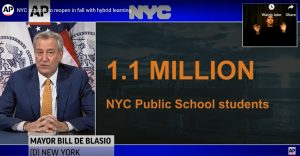 Most New York City students will return to their physical schools two or three days a week and learn online the rest of the time under a plan announced Wednesday by Mayor Bill de Blasio, who said schools can’t accommodate all their students at any one time and maintain safe social distancing.

“When you think about social distancing, you need more space,” de Blasio said. “You’re going to have fewer kids in a classroom, fewer kids in the school building.”

De Blasio said parents will have the option of online-only instruction for their children, but he said 75% of parents who answered a survey want their children in school in September.

Gov. Andrew Cuomo, who has clashed with de Blasio repeatedly over control of the city’s schools and other issues, said all school districts statewide must submit plans for reopening by July 31 and state officials will decide in the first week of August whether to accept the plans — and whether schools will reopen in the fall at all.

“They can submit a plan, the plan will be reviewed and then we will accept or deny the specific plan or ask for alterations on the specific plan and then make a global decision as to whether or not any school district will reopen and that will be the first week of August,” said Cuomo, who held a press conference in New York City shortly after de Blasio’s briefing.

De Blasio said the city would work closely “every step of the way with the state of New York.”

New York City’s school buildings were closed in March when nonessential businesses were shuttered to halt the spread of the coronavirus.

De Blasio said online-only instruction “has been really fantastic for certain students,” but many others lacked internet access or devices to connect to their online classes.

Under one model outlined by de Blasio and Schools Chancellor Richard Carranza, one group of students at a school would be in their classrooms on Tuesdays and Thursdays, a second group would be in class Wednesdays and Fridays and the two groups would alternate Mondays.

“This is very new and different and I know it’s no one’s first choice, but we need to do it to maintain the health and safety of our school communities,” Carranza said.

He said protocols for reopening in September will include face coverings for students and staff and nightly deep cleaning of schools.

Many questions were left unanswered, including what working parents will do on the days when their children are learning at home.

De Blasio said the question of how working parents will cope with the blended learning plan is “something we’re going to be building as we go along.”

“Some parents are going to be able to make it work under current conditions. Some are going to need extra help, and we’re going to work over the coming weeks to find other ways to help them,” he said.

The announcement of a reopening plan for New York City’s 1.1 million-student school system, by far the nation’s largest, came the day after President Donald Trump said he would pressure state and local officials nationwide to open schools.

New York, once the epicenter of the coronavirus in the United States, has been reopening in stages as officials seek to keep the rate of new infections low.

The number of patients hospitalized with COVID-19 peaked at more than 18,000 statewide in mid-April and has plunged since then, but hospitalizations ticked up over the last two days, from around 815 Sunday to more than 840 Tuesday.

Cuomo said 11 coronavirus deaths were reported in the state Tuesday.

“You get a little uptick, a little down, but they’re basically all in good shape,” Cuomo said of the metrics.

Cuomo said all county fairs will be canceled this summer. Earlier this week, he announced the cancellation of the annual state fair in Syracuse.