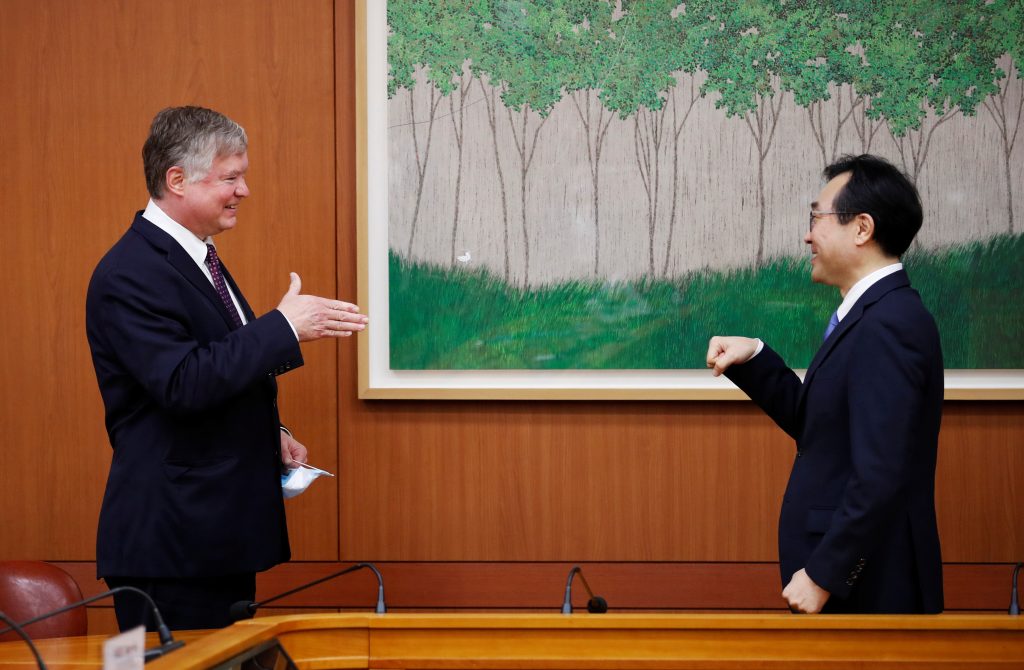 President Donald Trump’s point man to North Korea said Wednesday that the U.S. administration is ready to resume stalled nuclear negotiations despite the North’s repeated claims that it has no immediate intent for dialogue with Washington.

U.S. Deputy Secretary of State Stephen Biegun spoke to reporters following meetings with South Korean officials in Seoul, where they reaffirmed the allies’ commitment toward a diplomatic approach in resolving the nuclear standoff with the North but avoided specific answers on what was discussed.

The meetings came hours after the North’s state media reported that leader Kim Jong Un visited a mausoleum in Pyongyang to pay tribute to his late grandfather and state founder Kim Il Sung on the anniversary of his death.

The North’s official Korean Central News Agency didn’t mention any comments by Kim on the status of U.S. talks, which have faltered over disagreements in exchanging sanctions relief and disarmament.

After talks with South Korean nuclear envoy Lee Do-hoon, Biegun said Washington was prepared to resume dialogue with the North whenever Kim picks his counterpart who would be empowered to negotiate on crucial issues.

He said the United States did not request any meetings with North Korea during his trip.

“When Chairman Kim appoints a counterpart to me who is prepared and empowered to negotiate on these issues they will find us ready at that very moment,” Biegun said.

“I want to be very clear on one point. I do not take direction from [North Korean] Vice Minister Choe Sun Hui,” Biegun said.

Trump and Kim have met three times since 2018 but those negotiations fell apart since their second summit in February last year in Vietnam. North Korea has repeatedly said in recent months that it would no longer give Trump the gift of high-profile meetings he could boast of as foreign policy achievements unless it gets something substantial in return.

North Korea has also been dialing up pressure on the South, cutting off virtually all cooperation and blowing up an inter-Korean liaison office in its territory last month. It followed months of frustration over Seoul’s unwillingness to defy U.S.-led sanctions and restart joint economic projects that would help the North’s broken economy.

Some analysts believe North Korea will avoid serious talks with the Americans for now and instead focus on pressuring the South in a bid to increase its bargaining power before an eventual return to negotiations after the U.S. presidential election in November. They say North Korea likely doesn’t want to make any major commitments or concessions when there is a chance U.S. leadership could change.

But others say a fourth Trump-Kim summit before the elections wouldn’t be impossible. Trump may seek something dramatic to improve his falling poll numbers, while Kim might seek a quick exchange of denuclearization steps and sanctions relief and South Korean investment if he sees the window of opportunity closing with the Trump presidency.