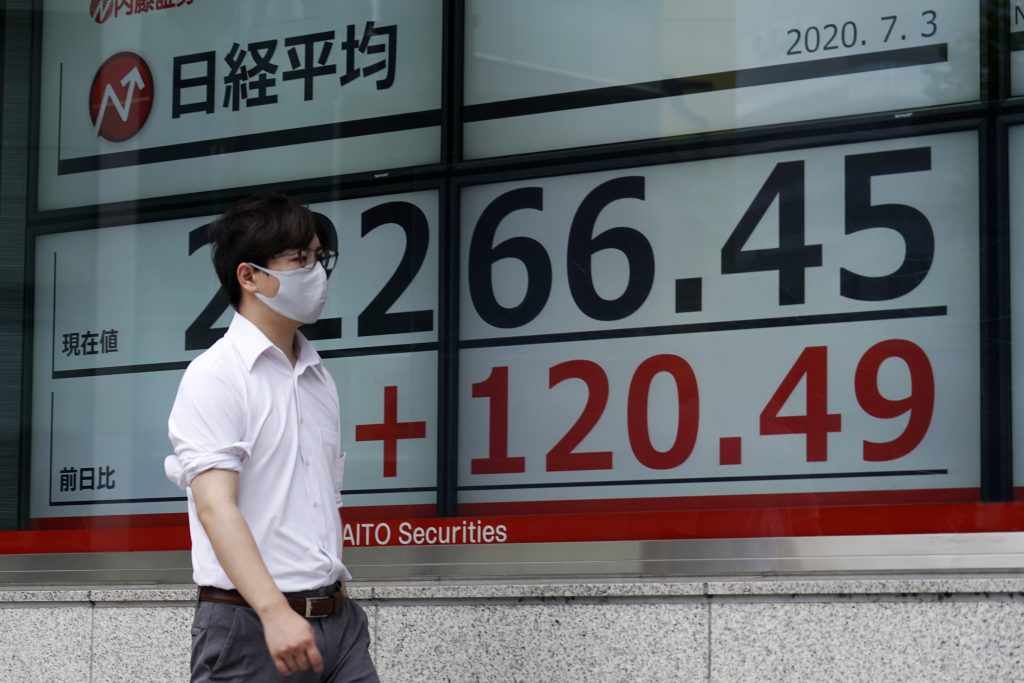 Investors appeared to shrug off news of rising numbers of coronavirus patients in South Korea and Japan, where Tokyo reported 124 newly confirmed cases.

The jobs data and improved global indicators are boosting sentiment, along with positive reports on potential vaccines and treatments for the coronavirus that has infected more than 10.8 million people and killed over 520,000, according to data from Johns Hopkins University that experts say understates the tally due to issues with testing and asymptomatic cases.

Such news brought a “favorable turn in the risk merry go round this week as this positive news is currently tempering the seemingly endless negative views around the rapidly rising new daily virus cases in the U.S.,” Stephen Innes of AxiCorp said in a commentary.

Overnight, the S&P 500 rose 0.5%, its fourth-straight gain, ending the holiday-shortened week with a gain of 4%. U.S. markets are closed Friday in observance of Independence Day.

The Nasdaq composite climbed to another all-time high, aided by more gains in technology companies. Energy companies notched some of the biggest gains as oil prices strengthened on hopes that a recovering economy will mean more demand.

However, news that Florida had another sharp increase in confirmed cases helped cut the S&P 500′s early gains by more than half. The bond market also signaled caution, as yields moved broadly lower.

A recent surge in new confirmed cases of the coronavirus in Florida, Texas and several other states has led some governors to halt the reopening of their economies or to order some businesses, such as restaurants and bars, to reclose. That has dimmed some of the optimism for a relatively quick economic turnaround, especially for travel-related sectors like cruise lines.

Even so, investors continue to bet that the recovery will proceed, despite the worrying rise in new cases.

The indexes were up even more at the start of the day’s trading, after the U.S. government said employers added 4.8 million jobs to their payrolls in June for the second-straight month of growth. The unemployment rate remains very high at 11.1%, but last month’s improvement was much better than economists expected.

The pandemic makes collecting data on the economy unusually difficult, but economists say it’s clear that the job market is improving after collapsing in the spring amid widespread shutdowns. That bolsters investors’ hopes that the economy can recover from its recession relatively quickly as governments relax restrictions.

Many workers across the country are still experiencing economic pain, with only about a third of the 22 million jobs lost to the recession recovered so far. And worries are rising that worsening levels of infections in not just Florida but across swaths of the U.S. South and West could choke off the budding economic improvements. Such concerns have held the market in check since early June following a months-long rocket ride.

In other trading, benchmark U.S. crude oil for August delivery slipped 45 cents to $40.20 per barrel in electronic trading on the New York Mercantile Exchange. It rose 83 cents Thursday to settle at $40.65 a barrel. Brent crude oil for September delivery dropped 47 cents to $42.67 a barrel.

The yield on the 10-year Treasury note was steady at 0.67%. It tends to move with investors’ expectations for the economy and inflation.