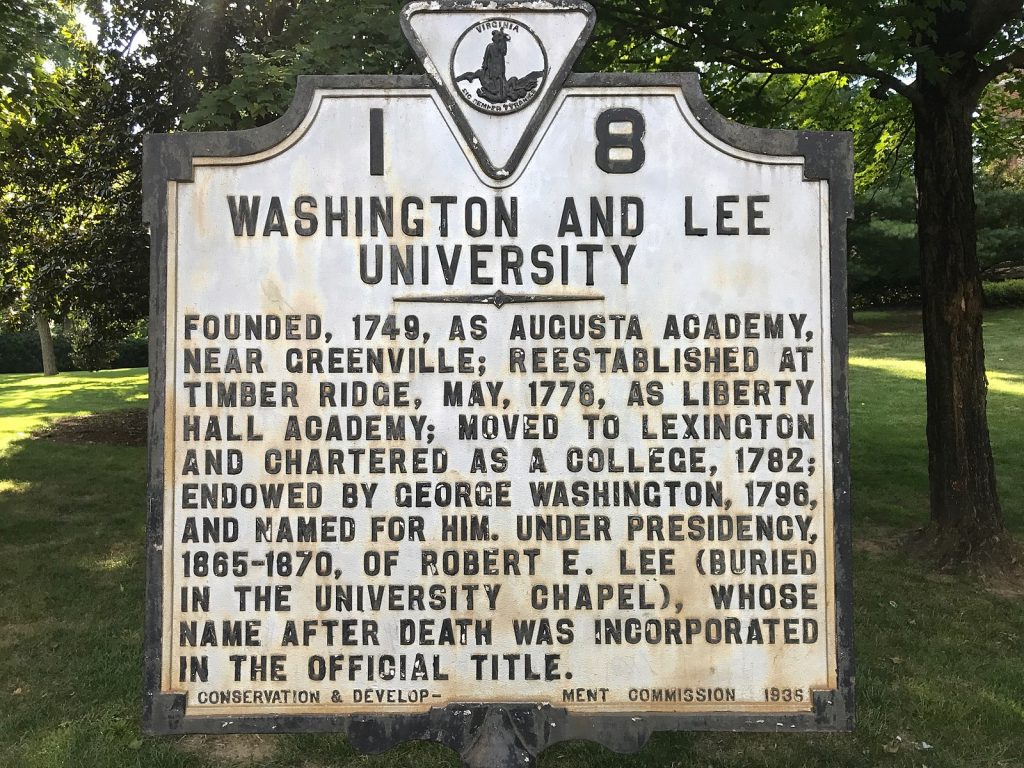 Student leaders at Washington and Lee University have asked that the name of the school be changed, that the glorification of Confederate Gen. Robert E. Lee on the campus end, and that those steps be followed by lasting institutional change.

In a separate effort, a majority of faculty members has signed onto a petition calling for changing the name, which faculty leaders plan to give to the school’s board of trustees on Monday, according to a professor helping to lead the effort.

And 2,000 alumni have joined a group calling for the name to change, according to a leader of a coalition formed on social media.

The mounting pressure on the board comes at a time when monuments are falling across the country amid protests over police brutality and urgent examinations of racism, culture and the way history is remembered.

The private college in Virginia, named in honor of two of its early benefactors, George Washington and Lee, has particularly deep and complex ties to the Confederacy. Lee’s tomb, a place of pilgrimage for some who venerate that cause, is on the campus.

Over the years, school officials have taken steps to change the way Lee’s contributions are remembered, such as emphasizing his role as an educator and removing Confederate flags. After violence in Charlottesville was ignited by the dispute over a monument to Lee, the university’s president called for a thorough examination of the institution’s history. That commission recommended numerous changes, including the way that history would be taught and shared, but did not call for the school’s name to be changed.

Traditionally the school’s alumni have been staunch advocates for maintaining the school’s name and many of its traditions.

But in recent weeks, after the death of George Floyd in police custody in Minneapolis, national protests over race and the removal of Confederate monuments even in Richmond, which was the Confederate capital, a growing number of alumni have changed their minds, become more vocal, or both.

“For the first time ever, it seems like this effort has momentum,” said Trent Merchant, who graduated in the class of 1992 and has helped lead an effort by alumni to write letters to university leaders advocating for a change. “We want to remove an obstacle that is standing in their way,” he said.

University leaders have prioritized issues such as equity and inclusion, he said, “but because of the university’s history the board is sometimes walking in quicksand.

“In many ways, Lee is the foundation of a culture built on myths, lies and legends that has been actively propagated by the university and its community for 150 years,” Merchant said. “If we remove that foundation, it at last creates an opportunity for that university community to work together to create a culture that speaks more accurately to the university’s values and current initiatives.”

A spokeswoman for the university did not immediately respond to a request for comment Thursday.

Student leaders could not immediately be reached for comment Thursday. But in their statement to the university, they wrote that the executive committee of the student body had concluded that they could no longer remain silent on this issue. After listening to discussion in recent weeks, they wrote, “it is clear Robert E. Lee’s enduring legacy on our campus and in our university’s name serves as a constant reminder for many, especially Black students and other students of color, of the racial oppression he fought to preserve and which has persisted throughout the history of our nation.”

As representatives of the student body, they wrote, they could not ignore students affected “most personally on a daily basis by the glorification of Robert E. Lee at Washington and Lee University. The call for the removal of Lee from our institutional name is not a call to erase our history, but rather a call to end the exaltation of a figure representative of values incongruous with the values of our university.”

It was just one of many changes that were needed at the school, they wrote. “[W]e are committed to concrete, institutionalized change that seeks to make the W&L experience meaningful and memorable for each and every student.”