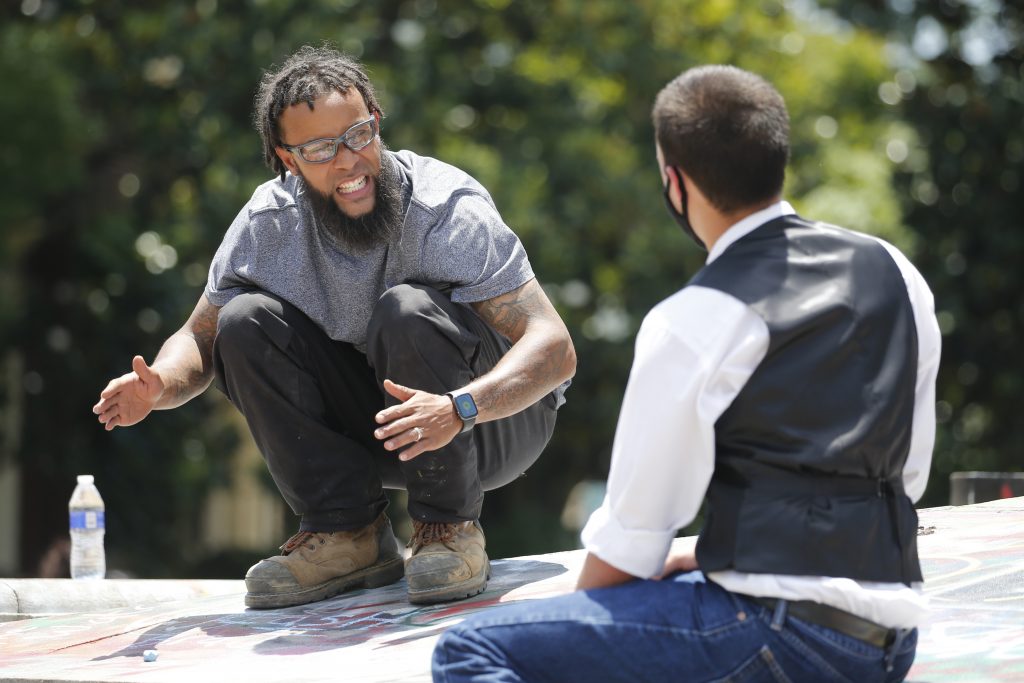 Just a little over a month ago, the area around Richmond’s iconic statue of Confederate Gen. Robert E. Lee was as quiet and sedate as the statue itself.

But since the May 25 police killing of George Floyd in Minneapolis, the area has been transformed into a bustling hub of activity for demonstrators protesting against police brutality and racism.

The giant concrete pedestal of the statue is now covered by colorful graffiti, with many of the hand-painted messages denouncing police and demanding an end to systemic racism and inequality. Clashes between police and protesters gathered near the statue have become a regular occurrence.

In response to the protests, Virginia Gov. Ralph Northam has pledged to take down the statue. But its removal has been at least temporarily blocked by a lawsuit, one of several complaints filed by people who want the monument to stay where it has stood since it was erected in 1890 in this former capital of the Confederacy.

The statue is located on Richmond’s Monument Avenue, a boulevard of stately homes that also features several other Confederate monuments targeted for removal.

On Wednesday and Thursday, work crews used giant cranes, harnesses and power tools to remove imposing statues of Gen. Stonewall Jackson and Navy officer Matthew Fontaine Maury from their pedestals as hundreds of onlookers cheered. The statues were taken away after Mayor Levar Stoney ordered the immediate removal of all Confederate monuments from city land.

Several dozen Confederate symbols have been removed from public land in the U.S. in the five weeks since the death of George Floyd at the hands of police sparked a nationwide protest movement.

At the Lee statue, a new vibe has emerged alongside the raucous atmosphere of protests, one that is more reminiscent of the hippie peace festivals of the 1960s. Each day, hundreds of people of all ages and races visit the statue, located on a busy traffic circle and surrounded by grass.

A barbecue grill cooks up hot dogs and burgers, while signs direct visitors to free snacks and drinks. Children play at a basketball hoop. Volunteers at a voter registration table urge people to get involved. Music is heard blasting from cars parked on nearby streets. A T-shirt decorating table gives visitors a chance to express themselves.

“There’s just a feeling of community and family. All around the circle, you have all different people coming around and doing different things. It’s really inspiring,” said Joseph Rogers, a descendant of slaves and an organizer with Virginia Defenders for Freedom, Justice and Equality, a volunteer organization that works on social justice issues.

Some meet here to begin a daily protest march; others come to gawk and take selfies. Still others come to see a piece of history while they still can.

Lance Jennings, 18, made the 40-minute drive to Richmond with his family right after his high school graduation in King William, Virginia, because he wanted to get his photo taken in front of the statue.

“It was like people were hanging out at a park. It was so peaceful,” he said, adding later, “If it’s like that and people can sit out there and there’s no trouble, it should be a sign to people. It’s very important to Black people and to people who believe that every life matters. They’ll see people are not just out there trying to destroy everything.”

Lorenzo Nicholson and his wife tried to make a visit to the statue on a recent weekday afternoon a teachable moment for their three young boys. Nicholson said the whole family was moved by the stories of Black people killed by police. Some of those stories are reflected on laminated signs and photos that form a circle around the statue, where visitors regularly leave flowers, candles and other trinkets to honor the memory of those who died.

“All of these pictures you’re seeing around the statue: It’s about their lives and the injustice that has occurred,” he said. “You can’t be human and not feel this.”

Nighttime gatherings near the statue have been more volatile, as protesters have clashed with police using tear gas, pepper spray and rubber bullets. Police say they have been repeatedly attacked by protesters throwing bottles, bricks and other objects.

A group of civilian volunteers armed with handguns and rifles has been patrolling the area near the statue to keep protesters safe. The Richmond Times-Dispatch reports that members of the security force communicate on walkie-talkies and sometimes identify themselves with code names.

Hand-painted messages cover concrete barriers that were put in place after protesters toppled several other Confederate statues and state officials became concerned that people could get hurt if they tried to do the same with the 12-ton Lee statue. Many of the graffiti messages contain profanity and are strong condemnations of police. But other messages are more mellow. “Love Wins,” reads one message painted inside a heart. “No More Hate,” reads another.

“I don’t necessarily agree with defacing property, but it’s an expression of their anger,” Nicholson said. “At the end of the day, it is in a way bringing people together from all backgrounds for a cause they’re very passionate about.”