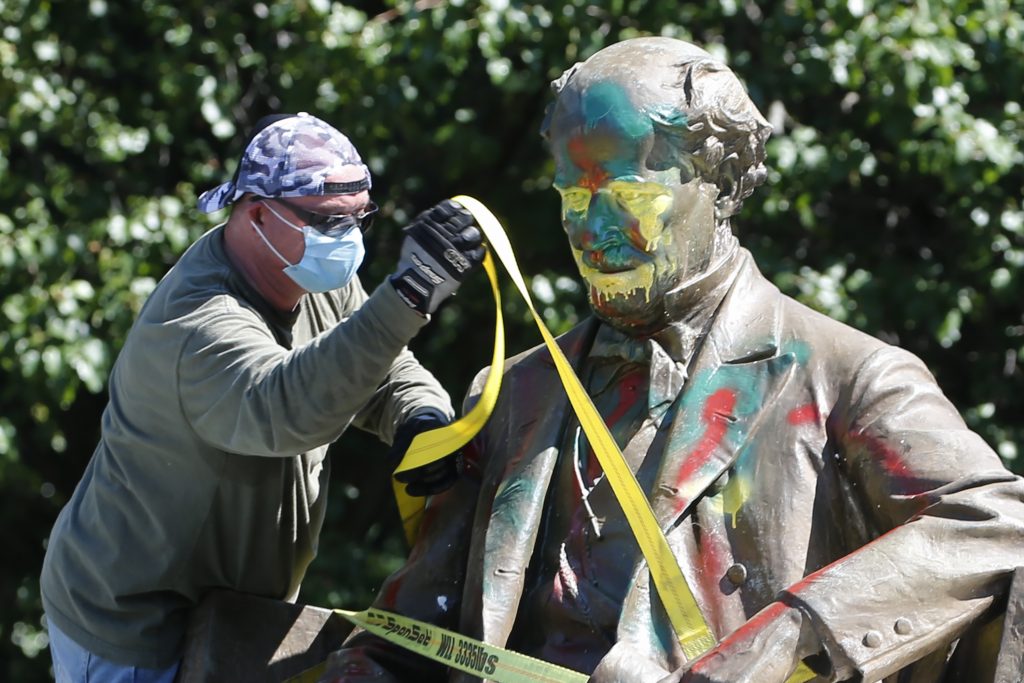 Work crews removed a second Confederate monument in Richmond on Thursday, as the city rushes to take down statues that have long been seen as symbols of slavery and oppression.

A crowd cheered as a crane pulled a statue of Naval officer Matthew Fontaine Maury from its base, a day after crews removed a statue of Gen. Stonewall Jackson on an order from Mayor Levar Stoney to remove all Confederate statues on city land.

The Maury statue, unveiled in 1929, depicts Maury seated in a chair with a large globe above him. It was the last of five Confederate monuments erected on Richmond’s famed Monument Avenue.

Maury headed the coast, harbor and river defenses for the Confederate Navy. He was a leader in the fields of naval meteorology and navigation.

Two cannons were also removed from Monument Avenue on Thursday. The Richmond Times-Dispatch reports that a plaque on one of the cannons said it marks the location of the second line of the Confederate defenses of Richmond and was placed there in 1938 at the request of the Confederate Memorial Literary Society. The second cannon’s marker says it marks the spot where in 1861 “a large earthwork of the inner line of defense was constructed.”

Stoney called for the removal of the statues last month amid raucous protests over the police killing of George Floyd in Minneapolis. On Wednesday, Stoney ordered the immediate removal of the statues, citing the continuing demonstrations and concerns that protesters could get hurt if they tried to bring down the enormous statues themselves.

Last month, Gov. Ralph Northam ordered the removal of Richmond’s most prominent Confederate statue — a monument to Gen. Robert E. Lee on state property — but the removal has been at least temporarily blocked by a lawsuit.

Richmond — the formal capital of the Confederacy — has about a dozen Confederate statues.

Protesters tore down a statue of Confederate President Jefferson Davis last month. Another large monument slated for removal is a statue of Gen. J.E.B. Stuart.