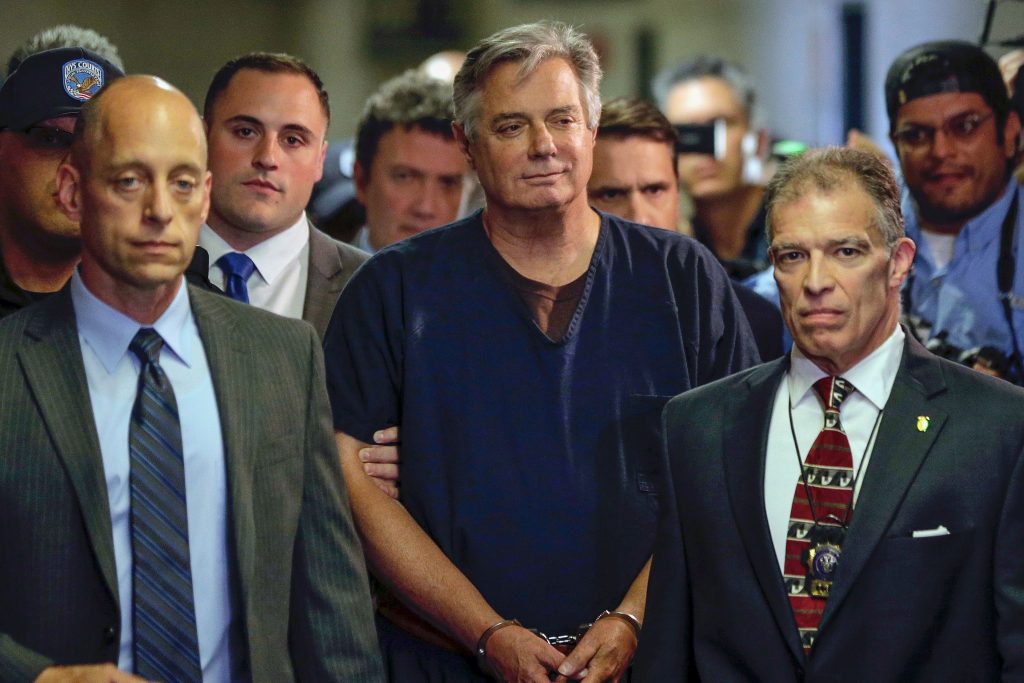 New York prosecutors seeking to revive state mortgage fraud charges against Paul Manafort say their case is distinct from one that sent President Donald Trump’s former campaign chairman to federal prison and should not have been thrown out on double jeopardy grounds.

Manhattan prosecutors contend their case was exempt from state double jeopardy protections because the charges involved different aspects of some of the offenses covered in the federal case, which ended with Manafort convicted on eight counts of tax and bank fraud and a hung jury on 10 other counts.

Manafort, 71, was released to home confinement in May because of concerns about the coronavirus less than a year into his nearly 7½-year sentence for the Virginia conviction and a subsequent guilty plea in a separate federal case in Washington, D.C.

A message seeking comment on the appeal was left with Manafort’s lawyer.

Prosecutors submitted paperwork outlining their appeal in April to the state court’s Appellate Division, but it was not posted to the docket until Thursday because of coronavirus-related closures.

In dismissing the mortgage fraud case in its early stages, Judge Wiley dealt a blow to what had widely been seen as an attempt by Manhattan District Attorney Cyrus Vance Jr., a Democrat, to hedge against the possibility Trump would pardon Manafort for federal crimes.

“Basically, the law of double jeopardy in New York state provides a very narrow window for prosecution,” Wiley said, explaining his ruling at the time.

Manafort was convicted in federal court on charges alleging he misled the U.S. government about lucrative foreign lobbying work, hid millions of dollars from tax authorities and encouraged witnesses to lie on his behalf.

Vance announced the state charges just minutes after Manafort’s sentencing in March 2019, saying in a statement at the time: “No one is beyond the law in New York.”

The New York indictment alleged Manafort gave false and misleading information in applying for residential mortgage loans, starting in 2015 and continuing until three days before Trump’s inauguration in 2017. Manafort was also charged with falsifying business records and conspiracy.

Manafort’s lawyer, Todd Blanche, raised the double jeopardy issue almost immediately after the state charges were filed, arguing that the factual overlap between the federal and state cases “is extensive — if not total.”

Manhattan prosecutors have argued their case was based in part on allegations that were never resolved in the federal trial and that charges they brought — mortgage fraud and falsifying business records — were state crimes but not federal crimes.

In their appeal, Manhattan prosecutors acknowledged their case involved some of the same issues as in the federal case. They argued its wasn’t double jeopardy because state law allows second prosecutions that contain “different elements and were designed to prevent very different kinds of harm than the offenses in the first prosecution.”