Israel Bnei Brak’s Rabbanim: Minyanim of Up to 40 People Only
CoronavirusIsrael 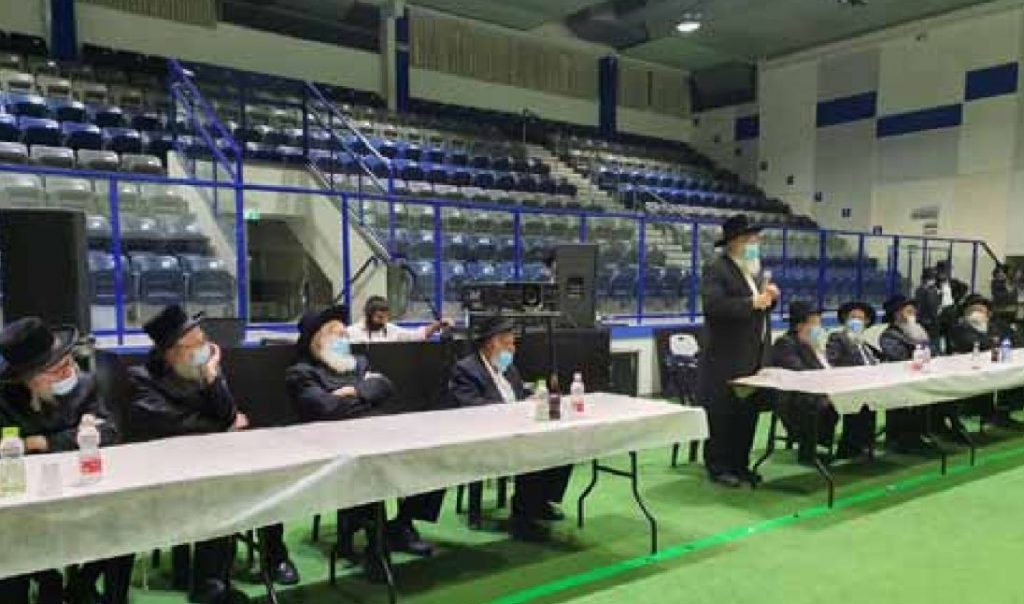 The leading Rabbanim and Roshei Yeshivah of Bnei Brak gathered Wednesday night to receive halachic decisions in light of the stark rise of new coronavirus cases in the city in recent days.

Harav Shimon Badani, shlita, opened the conference, stressing the gravity of the situation. In his remarks he expressed his duty of caution clearly and poignantly. “A parent came to me and said that at his son’s yeshivah the boys were told that they can sit in a class without a mask, I told him clearly: You have to get your son out of the yeshivah! Who can allow such a thing? Who can disregard the laws of pikuach nefesh? This is a d’Oraisa! He says he is not afraid? But the holy Torah is afraid!”

Harav Baruch Dov Diskin, shlita, Rosh Yeshivah, Yeshivas Orchos Torah, thanked Mayor Rabbi Avraham Rubinstein. “First of all, I would like to thank the mayor who devotes himself day and night for the city’s residents, with a clear sense of responsibility.

“We came here to cry. People need to know that anyone who goes without a mask is responsible for the entire Torah world. We may come, chas v’shalom, to a situation that we will have to close all Torah institutions and yeshivos; does the public not understand that we are heading in this direction? One Jew who disregards the regulations has to know that he bears responsibility for the limud haTorah that might be halted; who can take such a thing on his shoulders?

“We can, chas v’shalom, bring such a situation upon ourselves, if we aren’t careful!”

Rav of Bnei Brak, Harav Chaim Yitzchak Isaac Landau, shlita, spoke of the importance of following the regulations, especially in places with large crowds, like shuls and yeshivos.

In his remarks, he called for strengthening public confidence through a forum of city Rabbanim and doctors with whom to discuss and direct the public accordingly.

Harav Shevach Zvi Rosenblatt, shlita, Rav of Bnei Brak, elaborated on the duty of responsibility, which together with tefillah is what we must do at this stage. “There is no room for complacency.

“One who is complacent is responsible for bringing others into isolation and all the terrible damage that this does.”

Rabbi Dr. Meshulam Hart explained the effects of the coronavirus, and that, contrary to common belief, the virus is also dangerous for children and its effects are complex. The virus remains in the body and its effects are very complex, not the flu as some have once thought, and therefore our duty is to be extra cautious.

After a discussion and discussion between the Rabbanim, they signed a series of instructions to the public, with the consent of Gedolei Yisrael, shlita, and they called for minyanim to be held from Thursday until next Shabbos with a maximum of 40 mispallelim, and even those minyanim must be held with adhering to all Health Ministry regulations.

The Rabbanim called on anyone over the age of 70, or in the high-risk category, to take extra precautions.