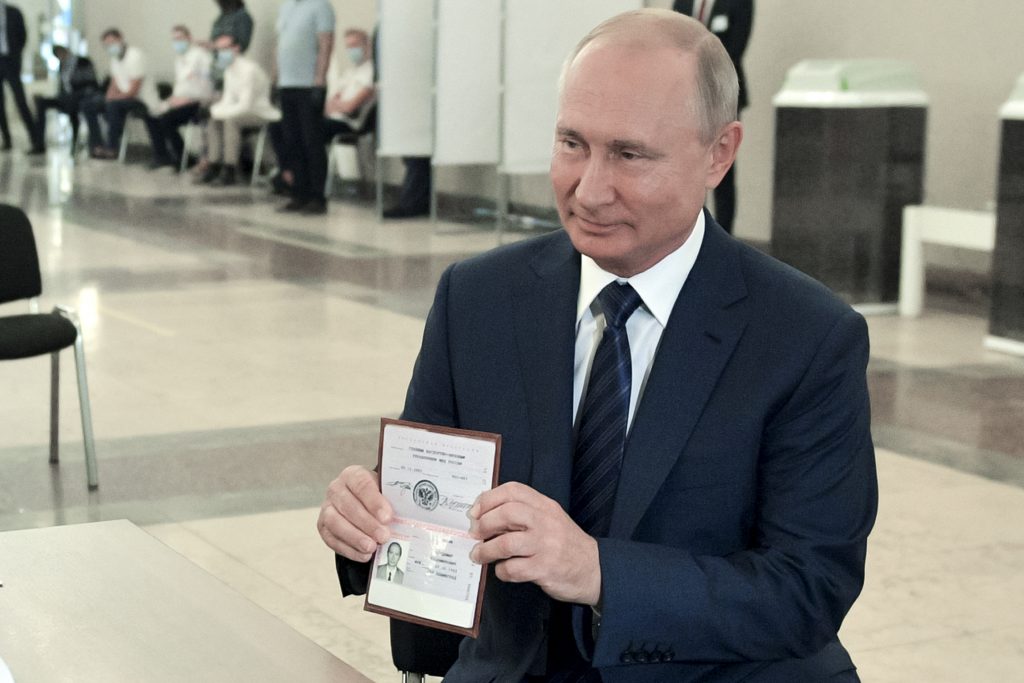 A majority of Russians approved amendments to Russia’s constitution in a weeklong vote ending Wednesday, allowing President Vladimir Putin to hold power until 2036, although the balloting was tarnished by widespread reports of pressure on voters and other irregularities.

With most of the nation’s polls closed and 15% of precincts counted, 71% voted for the changes, according to election officials.

For the first time in Russia, polls were kept open for a week to bolster turnout without increasing crowds casting ballots amid the coronavirus pandemic — a provision that Kremlin critics denounced as an extra tool to manipulate the outcome.

A massive propaganda campaign and the opposition’s failure to mount a coordinated challenge helped Putin get the result he wanted, but the plebiscite could end up eroding his position because of the unconventional methods used to boost participation and the dubious legal basis for the balloting.

On Russia’s easternmost Chukchi Peninsula, nine hours ahead of Moscow, officials quickly announced full preliminary results showing 80% of voters supported the amendments, and in other parts of the Far East, they said over 70% of voters backed the changes.

Putin voted at a Moscow polling station, dutifully showing his passport to the election worker. His face was uncovered, unlike most of the other voters who were offered free masks at the entrance

The vote completes a convoluted saga that began in January, when Putin first proposed the constitutional changes. He offered to broaden the powers of parliament and redistribute authority among the branches of government, stoking speculation he might seek to become parliamentary speaker or chairman of the State Council when his presidential term ends in 2024.

His intentions became clear only hours before a vote in parliament, when legislator Valentina Tereshkova, a Soviet-era cosmonaut who was the first woman in space in 1963, proposed letting him run two more times. The amendments, which also emphasize the primacy of Russian law over international norms, mention “a belief in G-d” as a core value, were quickly passed by the Kremlin-controlled legislature.

Putin, who has been in power for more than two decades — longer than any other Kremlin leader since Soviet dictator Josef Stalin — said he would decide later whether to run again in 2024. He argued that resetting the term count was necessary to keep his lieutenants focused on their work instead of “darting their eyes in search for possible successors.”

Analyst Gleb Pavlovsky, a former Kremlin political consultant, said Putin’s push to hold the vote despite the fact that Russia has thousands of new coronavirus infections each day reflected his potential vulnerabilities.

“Putin lacks confidence in his inner circle and he’s worried about the future,” Pavlovsky said. “He wants an irrefutable proof of public support.”

Even though the parliament’s approval was enough to make it law, the 67-year-old Russian president put his constitutional plan to voters to showcase his broad support and add a democratic veneer to the changes. But then the coronavirus pandemic engulfed Russia, forcing him to postpone the April 22 plebiscite.

The delay made Putin’s campaign blitz lose momentum and left his constitutional reform plan hanging as the damage from the virus mounted and public discontent grew. Plummeting incomes and rising unemployment during the outbreak have dented his approval ratings, which sank to 59%, the lowest level since he came to power, according to the Levada Center, Russia’s top independent pollster.

Moscow-based political analyst Ekaterina Schulmann said the Kremlin had faced a difficult dilemma: Holding the vote sooner would have brought accusations of jeopardizing public health for political ends, while delaying it raised the risks of defeat. “Holding it in the autumn would have been too risky,” she said.

In Moscow, several activists briefly lay on Red Square, forming the number “2036” with their bodies in protest before police stopped them. Some others in Moscow and St. Petersburg staged one-person pickets and police didn’t intervene.

Authorities mounted a sweeping effort to persuade teachers, doctors, workers at public sector enterprises and others who are paid by the state to cast ballots. Reports surfaced from across the vast country of managers coercing people to vote.

The Kremlin has used other tactics to boost turnout and support for the amendments. Prizes ranging from gift certificates to cars and apartments were offered as an encouragement, voters with Russian passports from eastern Ukraine were bused across the border to vote, and two regions with large number of voters — Moscow and Nizhny Novgorod — allowed electronic balloting.

In Moscow, some journalists and activists said they were able to cast their ballots both online and in person in a bid to show the lack of safeguards against manipulations.

Kremlin critics and independent monitors pointed out that the relentless pressure on voters coupled with new opportunities for manipulations from a week of early voting when ballot boxes stood unattended at night eroded the standards of voting to a striking new low.

In addition to that, the early voting sanctioned by election officials but not reflected in law further eroded the ballot’s validity.

Many criticized the Kremlin for lumping more than 200 proposed amendments together in one package without giving voters a chance to differentiate among them.

“I voted against the new amendments to the constitution because it all looks like a circus,” said Yelena Zorkina, 45, after voting in St. Petersburg. “How can people vote for the whole thing if they agree with some amendments but disagree with the others?”

Putin supporters were not discouraged by being unable to vote separately on the proposed changes. Taisia Fyodorova, a 69-year-old retiree in St. Petersburg, said she voted yes “because I trust our government and the president.”

In a frantic effort to get the vote, polling station workers set up ballot boxes in courtyards and playgrounds, on tree stumps and even in car trunks — unlikely settings derided on social media that made it impossible to ensure a clean vote.

In Moscow, there were reports of unusually high numbers of at-home voters, with hundreds visited by election workers in a matter of hours, along with multiple complaints from monitors that paperwork documenting the turnout was being concealed from them.

At the same time, monitoring the vote became more challenging due to hygiene requirements and more arcane rules for election observers.

“These differences can be explained only by forcing people to vote in certain areas or by rigging,” Golos said.

Observers warned that the new dubious methods used by authorities to boost turnout, combined with numerous bureaucratic hurdles that hindered independent monitoring, would undermine the legitimacy of the vote.

“There is a big question about the results of this vote,” Melkonyants said, adding that its outcome “can’t really bear any legal standing.”