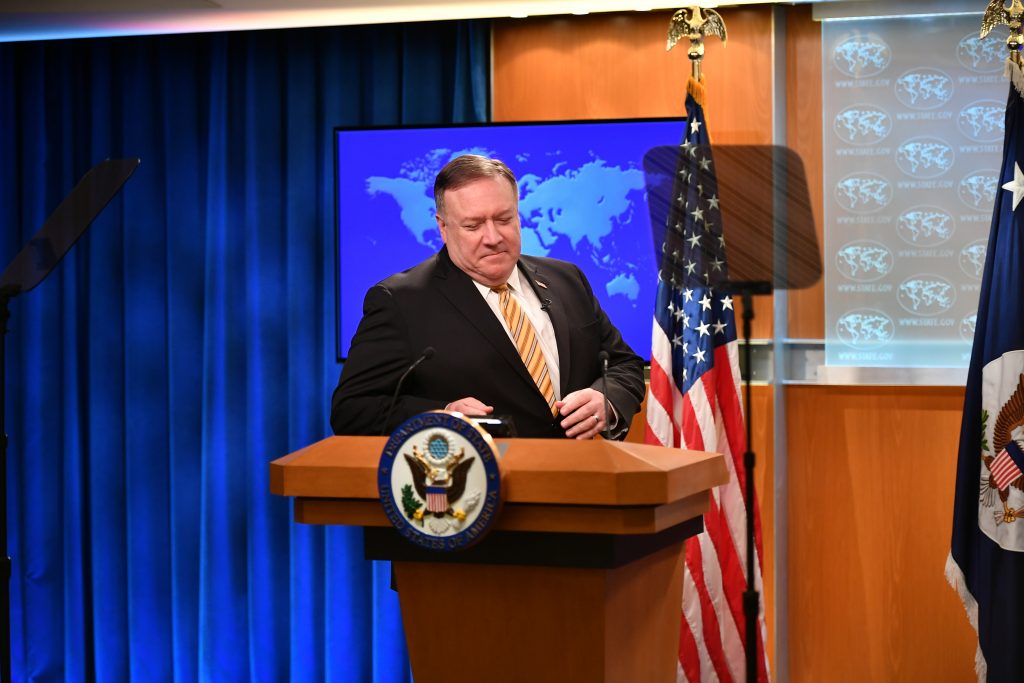 Calling Iran “the world’s most heinous terrorist regime,” Secretary of State Mike Pompeo urged the U.N. Security Council on Tuesday to extend the U.N. arms embargo against Tehran, which expires in October, and reject “extortion diplomacy.”

He called for the U.S. to compensate the Iranian people for the damage and vehemently opposed any extension of the arms embargo, warning that Iran’s options “will be firm” if it is maintained and the U.S. will bear full responsibility.

The United States has circulated a draft Security Council resolution to extend the arms embargo indefinitely, and Pompeo said the United States’ “overwhelming preference” is to work with its 15 members to adopt it.

But he indicated that if the resolution isn’t approved, which is likely because of Russian and Chinese opposition, the U.S. will move to invoke a provision of the 2015 nuclear deal between Iran and world powers to re-impose all U.N. sanctions against Iran. The Trump administration pulled out of the deal in 2018.

Pompeo spoke at a virtual open meeting of the council on implementation of Resolution 2231, which was adopted in 2015 to endorse the Iran nuclear deal. The arms embargo is included in the measure.

Zarif told the council later that the U.S. violated all provisions of the deal by its withdrawal and insisted that the arms embargo be lifted completely on its Oct. 18 expiration date. “Any attempt to change or amend the timetable” for lifting the embargo is tantamount to undermining the entire resolution, he said.

“It is obvious that the ultimate goal is to antagonize Iran and push it to radical retaliation, which will become an invitation for further sanctions,” Nebenzia said.

China’s U.N. Ambassador Zhang Jun also opposed extending the arms embargo, saying having quit the nuclear agreement the U.S. is no longer a participant and “has no right to trigger” the so-called snap-back provision in the resolution to re-impose U.N. sanctions.

Pompeo noted that Iran’s President Hasan Rouhani recently declared that “Iran will give a crushing response if the arms embargo on Tehran is extended.” He expressed hope that Zarif would later say who Iran intended to “crush” and how.

Zarif didn’t, but the foreign minister told the council: “The international community in general — and the U.N. Security Council in particular — are facing an important decision: Do we maintain respect for the rule of law, or do we return to the law of the jungle by surrendering to the whims of an outlaw bully?”

Pompeo seized on findings in a report this month by U.N. Secretary-General Antonio Guterres who said the United Nations has determined that Iran was the source for several items in two arms shipments seized by the U.S., and for debris left by attacks on Saudi Arabia’s oil installations and an international airport.

The report also said some of the items seized by the U.S. in November 2019 and February 2020 “were identical or similar” to those found after cruise missiles and drone attacks on Saudi Arabia in 2019.

Pompeo also blamed Iran for other actions, including an attack on U.S.-led coalition forces in Iraq in January using its advanced missiles, and supplying Shiite militia forces who have launched dozens of rocket attacks since last year against U.S. and coalition forces fighting Islamic State extremists.

If the arms embargo is lifted, he said, “Iran will be free to purchase Russian-made fighter jets that can strike up to a 3,000-kilometer radius – putting cities like Riyadh, New Delhi, Rome and Warsaw in Iranian crosshairs.”

Pompeo said Iran would also be free to upgrade and expand its submarine fleet and to purchase advanced technologies for its Middle East proxies including Hamas in Gaza, Hezbollah in Lebanon and Syria, and Yemen’s Houthi Shiite rebels.

And it will be free “to become a rogue weapons dealer, supplying arms to fuel conflicts from Venezuela, to Syria, to the far reaches of Afghanistan,” he said.

Zarif refuted many of the findings of the report and accused the U.S. of “maliciously” raising matters extraneous to the nuclear agreement, “such as Iran’s defensive capabilities and regional policies,” which are also “parroted by a handful of its allies and clients.”

He said these issues were deliberately left out of the deal because both sides disagreed on certain issues. He pointed to the U.S. unwillingness to address “our grave concerns over its unfathomable level of arms sales and build-up in our neighborhood” and its interventions in the Middle East.

Pompeo said he detailed only a fraction of “the overwhelming evidence” against Iran and told the council that the U.S. call to maintain the arms embargo is backed by Middle East countries from Israel to the Gulf “who are most exposed to Iran’s predations.”

The Trump administration has won only tepid support from allies for the U.S. draft resolution to maintain the arms embargo, and European countries are expected to present a counter-proposal that would extend at least parts of the embargo for six months. It is not clear if the U.S., Russia or China would support such a proposal.

Zarif said the U.S. has no rights under Resolution 2231, “nor can its enablers try to save its face via so-called middle-ground formulas.”

The council meeting took place a day after Iran issued an arrest warrant and asked Interpol for help in detaining President Donald Trump and dozens of others it believes carried out the U.S. drone strike that killed a top Iranian general, Qassem Soleimani, in Baghdad earlier this year. Trump faces no danger of arrest and Interpol later said it would not consider Iran’s request.

However, the charges underscore the heightened tensions between Iran and the U.S. since Trump unilaterally withdrew America from the nuclear deal with world powers in 2018 and re-imposed crippling U.S. sanctions on Tehran.

The five other powers that signed the nuclear deal — Russia, China, the United Kingdom, France and Germany — remain committed to it, saying the agreement is key to continuing inspections by the International Atomic Energy Agency and preventing Iran from pursuing nuclear weapons.

European Union Ambassador Olof Skoog told the council the nuclear deal “has removed the prospect of a nuclear-armed Iran from the regional security equation” in a verifiable way and the international community shouldn’t assume it will again be able to address Iran’s nuclear program so comprehensively.