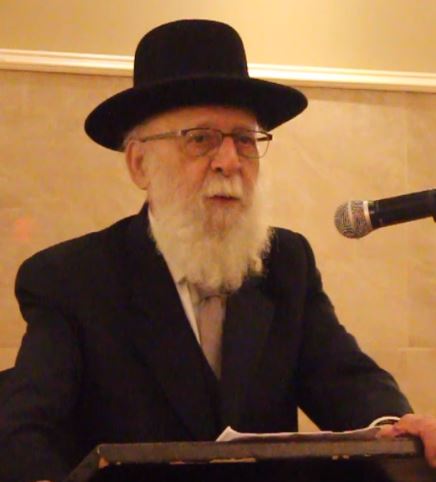 Harav Yosef Levi Hakohein Katzenstein, zt”l, was niftar last Wednesday after being hospitalized just before Pesach. He turned 89 just a few weeks ago on 20 Sivan.

Rav Yosef was born in Hamburg to Rav Yaakov, a Danish citizen who kept his Danish citizenry after moving to Germany to head the Talmud Torah. Rav Yaakov remained with the kehillah in Hamburg until 1942, answering difficult shailos which arose during this period and even building a mikvah for the remaining frum resident.

Because Rav Yaakov had a Danish passport, the family, including all 14 children, were able to escape to Copenhagen, Denmark. Later, when the Nazis were about to round up the Jewish community, they were transported from there to Sweden via the famous rescue boats. They arrived in Sweden on Erev Yom Kippur via 2 taxis, not having eaten much the past days while in hiding and fleeing. Rav Yaakov Katzenstein started saying Kol Nidrei in the car, and they arrived at the shul the last minute. Nevertheless, the entire family fasted that Yom Kippur. Rav Yosef never gave up his Danish citizenship as it saved his life two times.

Rav Yosef eventually arrived in America in 1946 without his parents while still a young teenager. His parents and most of his siblings immigrated to Eretz Yisrael sometime after the war, and he saw his father only one more time. He became a prominent talmid of Harav Yitzchok Hutner, zt”l, at Yeshiva Rabbeinu Chaim Berlin, and remained a talmid of the yeshiva his entire life, learning many hours in the Bais Medrash.

For a while, he taught in Yeshiva of Eastern Parkway and other yeshivos over time, yet he remained part of Yeshiva Rabeinu Chaim Berlin for the rest of his life. Indeed, for the last twenty years, he was part of the Kollel of the yeshiva. As one of the maspidim noted, he was the youngest of the bnei chaburah when it came to his fire in learning. It was also stated that Harav Ahron Shechter noted to young talmidim that “Rav Yosef’s bitul Torah was limud hatorah.” He was always thinking in learning, yet at the same time, he was knowledgeable in all matters of the world. He was brilliant in Torah, a historian, as well one of the contributors of the famous Encyclopedia Talmudit.

Rav Yosef was a brilliant talmid chacham, authoring many chidushei Torah and publishing them in his Sefer Kol Chayil. He served as Rav of Khal Neve Yaakov of Flatbush, where the shul hosted a kollel boker for many years which served as a makom of limud Hatorah and tefillah for Bnei Torah of all ages.

As a Rav, he was a very compassionate person, and he would help many people in his own inimitable way, like bringing simchah to the homebound and helping others financially make simchos. Rav Katzenstein always had good vort or a good joke just to make a person b’simchah. He was always a rodef shalom and sought the truth.

When he recently moved, he cried bitterly over the need to give away many of his prized seforim due to space constraints. It was as if he was losing his most priceless diamonds, and he made a cheshbon of who should get which seforim since he wanted them to be continued to be used.