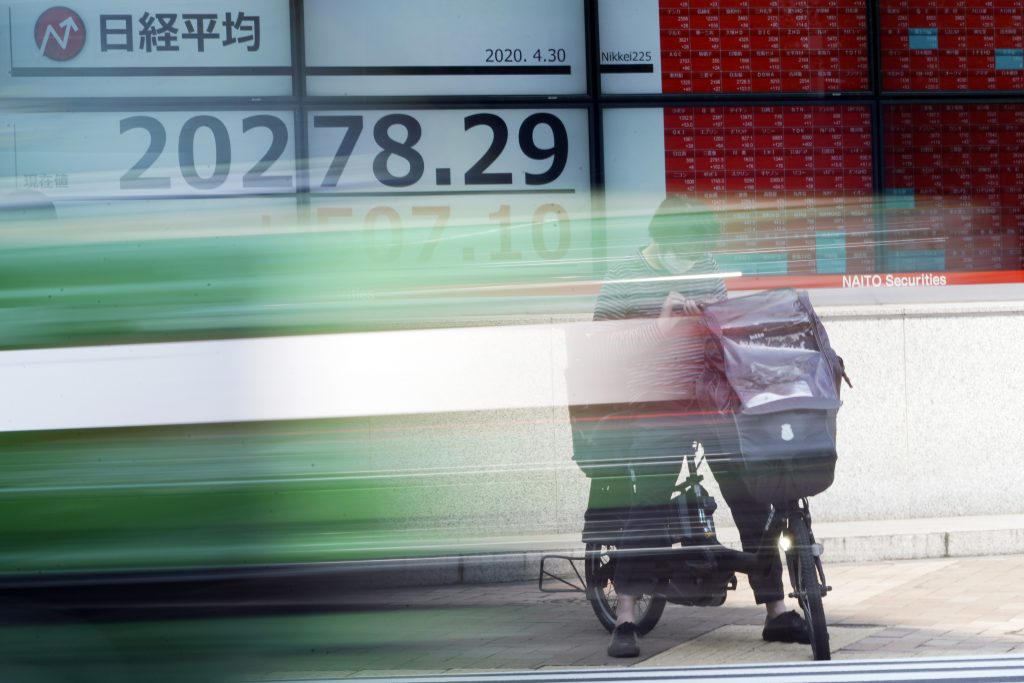 Asian shares were mostly higher Wednesday after Wall Street capped its best quarter since 1998, shrugging off continued signs of global economic damage from the coronavirus pandemic.

Shares rose in Taiwan and were mixed in Southeast Asia.

Markets have continued gaining despite signs global economies are ailing seriously because of the outbreak, with uncertainty still the new normal as reported cases keep surging around the world while no cure or vaccine for COVID-19 is available.

A quarterly Bank of Japan survey released Wednesday showed Japanese manufacturers’ sentiment plunged to its lowest level in more than a decade, as the pandemic crushes exports and tourism, mainstays for the world’s third largest economy.

The headline measure for the “tankan,” tracking sentiment among large manufacturers, fell to minus 34, the lowest since 2009, from minus 8 the previous quarter. The tankan measures corporate sentiment by subtracting the number of companies saying business conditions are negative from those responding they are positive.

A survey showed China’s manufacturing activity improved in June, adding to signs of a gradual recovery from the country’s deepest economic downturn since at least the mid-1960s.

The monthly purchasing managers’ index issued by a business magazine, Caixin, rose to 51.2 from May’s 50.7 on a 100-point scale on which numbers above 50 indicate activity increasing. A sub-index for export orders rose to 47 from 41.7.

The Chinese economy has been recovering but only slowly since global demand for exports is weak and consumers and businesses inside China are wary of further outbreaks and other risks from the pandemic.

On Wall Street, the S&P 500 climbed 1.5%, bringing its gain for the quarter to nearly 20%. That rebound followed a 20% drop in the first three months of the year, the market’s worst quarter since the 2008 financial crisis. The plunge came as the pandemic brought the economy to a halt and millions of people lost their jobs.

“It’s the first time you’ve had back-to-back (quarters] like this since the 1930s,” said Willie Delwiche, investment strategist at Baird. “It’s pretty unprecedented.”

The whiplash that ripped through markets in the second quarter came as investors looked beyond dire unemployment numbers and became increasingly hopeful that the economy can pull out of its severe, sudden recession relatively quickly.

But most of Wall Street says not to expect anything close to a repeat of the rocking second quarter. Rising infections have several states pausing their lifting of restrictions.

The surge in confirmed new cases, which has prompted the European Union to bar U.S. travelers from entry, is seeding doubts that the economic recovery can happen as quickly as markets had forecast. That helps explain why the market’s momentum cooled somewhat in June.

Beyond the coronavirus, analysts also point to the upcoming U.S. elections and other risks that could upset markets. If Democrats sweep Congress and the White House, which many investors see as at least possible, it could mean higher tax rates, which could weaken corporate profits.

The quarter featured steady gains in technology stocks, which climbed 27.6%, second only to the consumer discretionary sector’s 30.2% gain. Airlines and cruise operators traded wildly after being battered for much of the first quarter.

Apple, once again the most valuable company in the S&P 500, gained 43.5% for the second quarter, American Airlines climbed 7.2% for the quarter, while Royal Caribbean Cruises vaulted 56.4%. Still, they each remain down nearly 60% for the year.