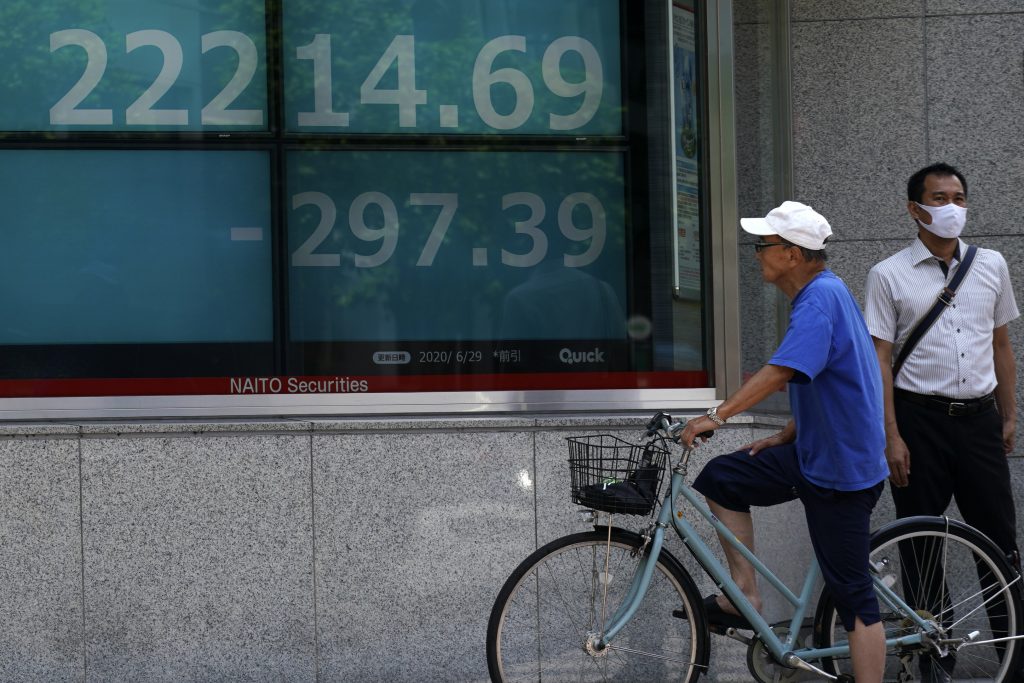 Stocks are climbing on Wall Street in midday Monday trading, clawing back more than a third of their losses from last week.

The S&P 500 was up 1%, driving decisively higher after a much healthier-than-expected report on the housing market shook the market from its wobbly start. European stocks had similar fluctuations before pushing higher, while many Asian markets finished with losses. Treasury yields were holding relatively steady.

Gains for Boeing and Apple in particular helped to lift Wall Street indexes. Boeing jumped 6% as its troubled 737 Max jet looks set to begin test flights soon, while Apple added 1.8% as customers keep buying its products regardless of whether they’re quarantined.

Stocks of smaller companies also jumped more than the rest of the market, which often happens when investors are feeling more optimistic about the economy. The Russell 2000 index of small-cap stocks was up 2.8% to recover nearly all of its loss from last week.

They’re the latest choppy moves for markets around the world, which have been swinging back and forth in recent weeks. A rise in infections of the new coronavirus, including in the U.S. South and West, has dented the optimism that earlier sent the S&P 500 screaming nearly all the way back to the record it reached in February.

The worry is that the worsening levels could choke off the budding improvements the economy has shown recently as states and other governments ease up on lockdown orders, even with the Federal Reserve and other central banks pumping unprecedented amounts of aid into the economy.

“Conflicting signals between the COVID-19 spread and economic data continue to keep risk sentiment, and consequently markets, in a gridlock going into the end of June,” said Jingyi Pan of IG.

Florida and Texas put new restrictions on bars to slow the spread of the virus, for example, which helped drive the S&P 500 to a loss of 2.9% last week. Other governments around the world are likewise backtracking on efforts to re-open their economies following widespread lockdowns that sent the global economy into a sudden, severe recession.

To see how sharply the economy is swinging, consider Monday’s report on the housing market. It showed that the number of Americans signing contracts to buy homes rose a record 44.3% in May from a month earlier. That was more than double the 17% rise that economists were expecting. It was also a whiplash reversal from the record-breaking plunge of nearly 22% that came in April as the pandemic froze the housing market.

The S&P 500 had been flipping between small gains and losses in the first hour of trading, down 0.3% at one point, before charging higher following the release of the housing report.

The market’s gains were widespread, with industrial companies and raw-material producers jumping the highest.

Simon Property Group, an owner of shopping malls, has seen its shares rise and fall for months with expectations of whether people will be able to get closer to “normal” activity. It was up 8.7% for one of the largest gains in the S&P 500.

Facebook rose 0.2% after shaking off a loss earlier in the morning. It’s facing a defection of advertisers tired of the racist and violent posts spreading through the social network. Starbucks on Sunday joined the list of big companies saying it will pause its advertising on social media.

Given all the uncertainty about the path for the economy and corporate profits, many professional investors say the only sure thing for markets is that upcoming movements will likely be volatile. The second quarter of the year is set to close out Tuesday, and the S&P 500 is on pace for a gain of more than 17%, which would be its best since late 1998. Of course, that follows the U.S. stock market’s loss of nearly 20% in the first quarter, which was its worst since the bottom of the 2008 financial crisis.

The yield on the 10-year Treasury held steady at 0.63%. It tends to move with investors’ expectations for the economy and inflation.