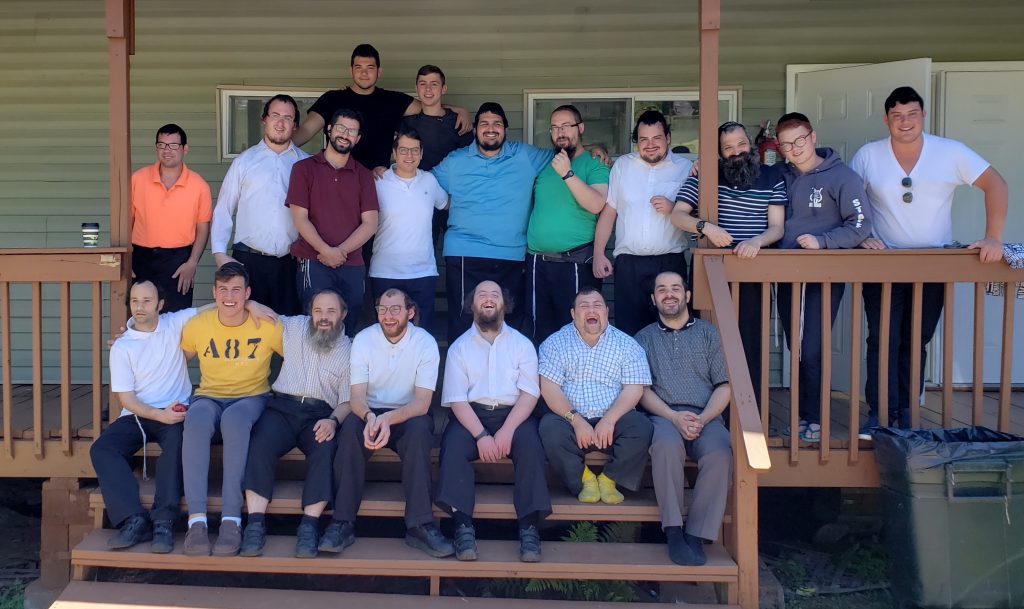 Chizkiyahu has cried himself to sleep nearly every night for the past week and a half.

A 17-year-old autistic boy, Chizkiyahu attends a special-needs yeshivah and lives with his parents and nine siblings in their Brooklyn home. Though relatively high-functioning, Chizkiyahu has his share of difficulties throughout the year, as do many autistic individuals: hampered growth mentally and physically, social difficulties, unusual looks and occasionally being mocked by other children.

Throughout the school year, Chizkiyahu counts down the days to sleepaway camp — for the mountain air, the grass and trees, the swimming and sporting activities, but also for the social interaction, the jobs he is given, the feeling of achievement and normality that he enjoys only during his two months in Camp Chaveirim-Yachad, a special-needs sleepaway program that leases space in Camp Magen Av.

But when the Cuomo administration announced the cancellation of sleepaway camps in New York state on June 12, it was a crushing blow to Chizkiyahu and his family.

“He talks about camp the whole year,” says Chizkiyahu’s father, Moshe. “He probably grows from these two months of summer more than the entire year, in every facet – social skills, learning, physical activity, the outdoors, the happiness. He has so much joy in Chaveirim-Yachad, where he is with boys like him, and also interacts with everyone else at Magen Av.”

Chizkiyahu distributes mail and works as a waiter in camp.

“He feels so accomplished — more than he ever can feel in school,” says Moshe. “Autistic children live on the social relationships, with counselors, with kids on the same level and with regular kids.

“Now, we hear Chizkiyahu crying every night in his room,” says a suddenly emotional Moshe, himself barely suppressing tears. “He expresses anger at Cuomo all the time. He feels like he has taken away his life.”

Chizkiyahu, a neighbor of this reporter, frequently pleads with the reporter these days, “Can you please ask Cuomo to open up the camps?”

“Why do you need camp opened?” the reporter asks.

“Because we need camp, so people should get out. Camp means fun, swimming, activities, concerts. It’s very important. I think about camp the whole year. I like it; it is so much fun. Without camp, staying home for the next two months is not OK.”

Chaim has not expressed much emotion for the past week and a half. But that is not unusual.

A 14-year-old autistic boy, Chaim attends a special-needs yeshivah and lives with his parents and four siblings in their Brooklyn home. Relatively low-functioning, Chaim does not convey much emotion at all. He is not even aware yet that summer camp — he, too, attends Chaveirim-Yachad — will be canceled this summer.

And if he were told, “I don’t know if he would totally understand it,” says his mother, Sarah.

“He doesn’t express himself so much, but we know how much camp means to him. There are a lot of outdoor activities. He likes swimming, he likes to walk in the country. The trees and grass are good for him. He definitely enjoys it, and we know that camp is good for him.”

The banning of sleepaway camps in New York state this summer, despite the permitting of day camps, has caused consternation for Orthodox Jewish communities across the nation, as tens of thousands attend sleepaway camps in the Empire State, mostly in the Catskill Mountains region. While other populations may view sleepaway camp as a luxury, for Orthodox Jews — many of whom are members of large families living in small homes in hot, cramped cities, and who require a structured, religious environment for their children year-round — it is viewed as a necessity, even in low-income families.

But special-needs families and advocates say that the need is even more crucial for special-needs children and adults, of all demographics and faiths.

Harmony has year-round day-hab programs in Boro Park for 140 high-functioning adults with special needs; 60 of them also attend Harmony programs in Camps Rayim, Bnos and Emunah. “Many really blossom during the summer. Some can’t get jobs in the city, but can in camp. It makes people feel important, and they have socialization with the regular population. Lots of them form special friendships that they keep up all year long.”

And allowing special-needs children and adults to attend sleepaway camps, say parents and program directors, is as important for their families as for the individuals themselves.

“Many parents tell us these eight weeks of camp give them time to recharge, to go another 10 months,” says Yehuda Meir Horowitz, development coordinator at HASC. “During the year, when they are taking care of their special-needs children, many parents can never go out for an evening, or go away for a Shabbos.”

“My wife, my children and I are devoted to Chizkiyahu’s well-being all year-round,” says Moshe. “We all take care of him — my wife spends more time on him than on our other nine children. Summer is the only time we’re not busy with him 24/7. If camp is canceled for him, none of us will be able to go on vacation this year.”

Sarah, too, says her family will be stuck at home all summer with Chaim if special-needs camps are not permitted to open.

“We wait all year for these two months,” she says. “When he goes to camp, it’s the only time all year our family can go away together.”

Sarah says the family would not be able to go to a bungalow colony or take a trip with Chaim.

“Our home is set up for Chaim, with safe rooms and combination locks. He still has to be watched, but not as much. If we ever leave the house with him, believe me it’s no vacation, because he has to be watched every single second. He could move furniture, break things, rip things — I can’t relax for a moment.”

Horowitz says that it is even more important for families to be able to send their special-needs child to camp this summer; since everyone has been “stuck home the last three months,” they’ve been “looking forward to this summer respite as a lifesaver.”

While some sleepaway camps are temporarily relocating out of state, that isn’t feasible for special-needs camps.

“A regular camp can just go into another facility and run,” says HASC Center Chairman Abe Eisner. “But our camp setup is so specialized, to service the needs of this population. We need to be fully set up for wheelchairs, [with special] showers, bathtubs and medical facilities. We can’t just take our campers into an existing bunkhouse somewhere else.”

Hirth says Harmony cannot bring its campers out of state because some have health concerns, and they don’t want to be too far from Hatzolah or New York City hospitals.

Additionally, New York state covers a portion of the cost of special-needs camps; if a camp leaves the state this summer, it would have to operate without this state funding.

Special-needs camps are working through the legalities, trying every avenue, exploring every possibility to hold sleepaway camp this summer. As of now, Harmony has an agreement with one of its partner camps to run a six-week program, and is in discussion with the others.

HASC will run a day camp on its grounds for clients whose families are in Upstate New York for the summer; for those in cities across the nation, it will have a “camp at home” program: counselors will go to the clients’ homes, to help and entertain them, giving the parents and families a much-needed respite.

Even if HASC is somehow able to obtain permission to run a sleepaway camp, it will not be a typical two-month camp season for 300 campers and 600 staff members, Eisner says.

In the interest of social distancing, and considering the increased risk if COVID-19 is contracted by some campers who have underlying medical issues, HASC would run a program only for higher-functioning individuals without medical concerns, for several small groups on a rotating basis, 10 days or two weeks each.

“We’re doing everything we can at HASC to give the parents the support they need to make it through another year,” Eisner says. “We can only do that by providing services at whatever level we can.”

“While no one can put themselves into the shoes of a family that has a child with a disability,” says OHEL CEO David Mandel, “we know that these last three months have been especially difficult on these families, and adding two summer months without a camp option would be absolutely overwhelming. Therefore, it is incumbent upon OHEL and Camp Kaylie to provide these families with realistic options.”

Cuomo’s office did not respond to Hamodia’s request for comment on the effect of the sleepaway-camp closure on special-needs individuals and families, and whether it might allow an exception for special-needs sleepaway camps.

Special-needs families say they are at a point of desperation.

“What does the governor expect us to do?” asks Moshe. “We have 10 kids living in a four-bedroom house. There’s no grass here in Brooklyn. It’s too late to even try to get a bungalow, because the governor didn’t announce there would be no sleepaway camps until the middle of June. Even if we take a bungalow, the other kids in the colony would not be used to him there, and maybe he’ll get teased. It’s not good for him.

“We plead to the governor, for the sanity of Chizkiyahu and the sake of our whole family. Our son has been locked up for three months already. He has no social environment; we see him regressing every day. Please, Mr. Governor. This is as ‘essential’ as it gets.”

“Can you put me on the phone with the governor?” he asks.

“Sorry, I’m unable to. But what would you say to him if I could?”

“Please open camps. It will mean so much to me and my friends.”