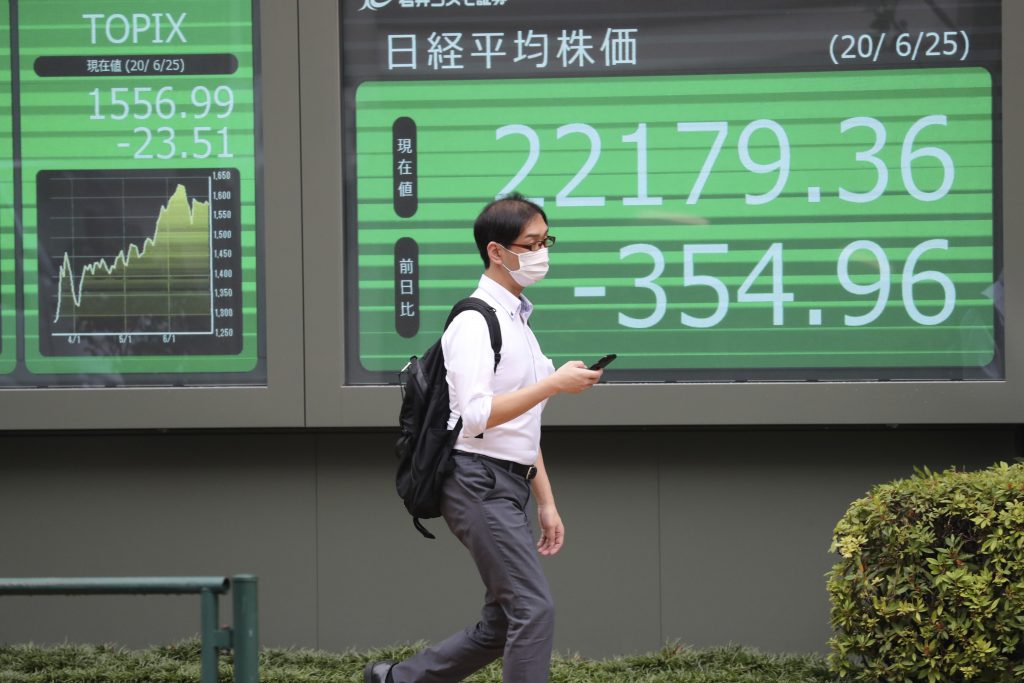 World shares and U.S. futures slipped Thursday as investors focused on surging new coronavirus cases in the U.S. that are dimming hopes for a relatively quick economic turnaround from the pandemic downturn.

A rise in new infections is stoking worries that reopenings of businesses closed earlier to fight the pandemic may have to be curtailed, despite indications that economies are recovering from lockdowns that are being eased in the U.S. and other countries.

“Financial markets had the chance to reassess some of the great expectations that have underlined the asset price rally since mid-March,” Jeffrey Halley of Oanda said in a report.

Talk of reimposing shutdowns in the U.S. has gotten investors’ attention, he said. “More concerning for the U.S. is that this is not even the dreaded ‘second wave’ of infections, merely an ongoing evolution of the first one.”

The airline said it will slash costs by billions of dollars and raise fresh capital, while grounding 100 planes for a year or more and immediately retiring its six remaining Boeing 747 planes.

Overnight, the S&P 500 fell 2.6% to 3,050.33, giving back all of its gains for the month. The selling accelerated on news that New York, New Jersey and Connecticut will require visitors from states with high infection rates to quarantine for 14 days.

“A huge problem for investors is that volatility is too expensive to buy right now, so they are finding it easier just to cut and run from their stock market positions,” Stephen Innes of AxiCorp said in a commentary.

On top of lingering concerns over trade tensions between the U.S. and China, reports said the White House is considering fresh tariffs on $3.1 billion worth of exports from France, Germany, Spain and Britain. That helped send markets tumbling on worries that such a move might spiral into another trade war, said Jingyi Pan of IG.

Despite shedding its gains for June, the S&P 500 still is on pace for its best quarter since the fourth quarter of 1998.

The market had been mostly in rally mode since April as investors focused on the prospects for an economic turnaround as broad areas of the economy reopened. But the recent surge in new infections has undercut that optimism.

While early hot spots like New York and New Jersey have seen cases steadily decrease, the virus is slamming the south and west, with several states setting single-day records, including Arizona, California, Mississippi, Nevada and Texas.

The yield on the 10-year Treasury note fell to 0.67% from 0.69% late Wednesday. It tends to move with investors’ expectations for the economy and inflation.

In energy trading, benchmark U.S. crude oil fell 55 cents to $37.46 per barrel in electronic trading on the New York Mercantile Exchange. It slid 5.8% to settle at $38.01 a barrel on Wednesday.