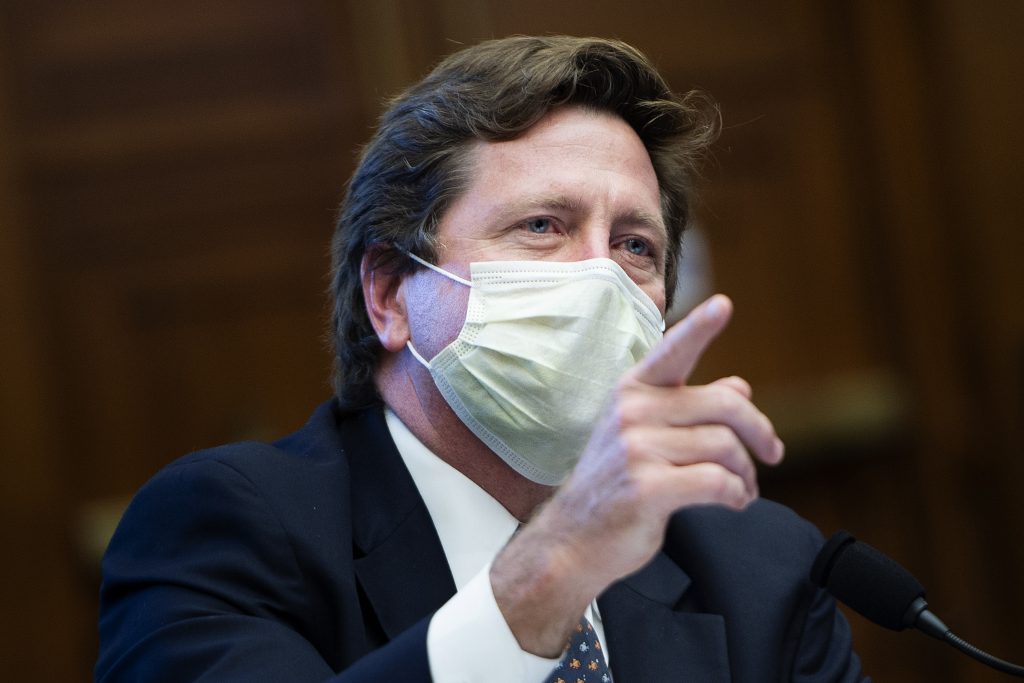 President Donald Trump’s pick to be the top federal prosecutor in Manhattan won’t say whether he would withdraw from overseeing matters related to Trump in his current job, as Securities and Exchange Commission chairman, or if confirmed as U.S. attorney.

Jay Clayton repeatedly told Democrats on the House Financial Services Committee on Thursday that his nomination to head the Southern District of New York was “entirely my idea.” He said Trump and Attorney General William Barr were “made aware” of his interest in the job during the weekend of June 12, a week before the Justice Department abruptly announced that the current U.S. attorney at that office, Geoffrey Berman, would be stepping down.

Berman, who has investigated some of Trump’s associates, refused to leave until Trump fired him.

Under questioning from Democrats, Clayton pledged to be independent as U.S. attorney but would not commit to stepping aside from matters related to Trump or his associates. Clayton would not say whether he had talked to anyone at Trump’s organization or in his family about the nomination. He declined to discuss how many times he’s played golf with the president or whether they discussed SEC business while playing.

“This is not a confirmation hearing, I am here as the chair of the SEC,” he told Rep. Sylvia Garcia, D-Texas. Under her questioning, Clayton declined to say whether he had approached Trump and Barr about the job or whether they had approached him.

The scrutiny of the nomination — and Berman’s firing — comes as the House investigates Barr and whether his department has become overtly politicized under Trump.

New York Rep. Carolyn Maloney, who leads the House Oversight and Reform Committee, asked Clayton several times if he would recuse himself from matters related to Trump if he were confirmed as U.S. attorney. He would only say he was committed to independence.

“Mr. Berman’s firing was very suspicious and raises a lot of questions about whether the president is interfering in ongoing investigations,” Maloney said.

Similarly, Clayton declined to commit to recusing himself from current SEC matters related to Trump, which came during a back-and-forth with California Rep. Maxine Waters, who heads the House Financial Services Committee.

Clayton said the conversations about the job arose as he was eager to leave Washington. He declined to say whether he was aware that Berman didn’t want to leave his job.

“I need to go back to New York,” Clayton told Maloney. “This is something I have been talking about for a while, consulting with people as to whether this would make sense for me to continue in public service.” He would not say with whom he had discussed it before June.

Sen. Lindsey Graham, R-S.C., the chairman of the Senate Judiciary Committee and a Trump ally, said he won’t proceed unless New York’s senators give their consent. But those Democrats have already rejected the nomination and say Clayton should withdraw.

One of high-profile investigations Berman was overseeing concerned the business dealings of Trump’s personal lawyer, Rudy Giuliani, including whether Giuliani failed to register as a foreign agent.

Berman’s office has also prosecuted a number of Trump associates, including Trump’s former personal lawyer and fixer Michael Cohen, who served a prison sentence for lying to Congress and campaign finance crimes. Cohen was recently released from a federal prison to continue serving his sentence on home confinement over coronavirus concerns.