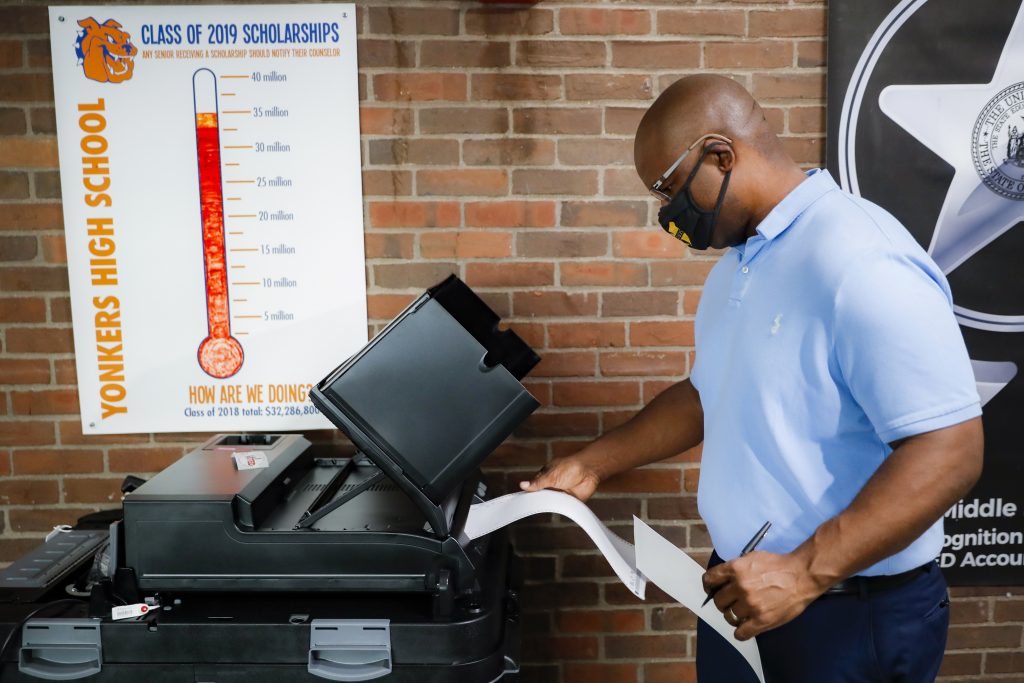 A deluge of yet-to-be-counted absentee ballots in New York this year means voters will have to wait until July to find out who won many primary elections Tuesday for the state legislature, Congress and other offices.

The mostly unsatisfying end to Primary Day came after a pandemic-era campaign season in which in-person politicking was curtailed, polling places consolidated, and all voters were encouraged to cast their ballots by mail, rather than risk getting exposed to the coronavirus at a polling location.

Nearly 1.8 million people requested absentee ballots. They had until Tuesday to mail them. Counting of those votes won’t begin until at least July 1, and could last several days or even weeks.

Voters who braved the polls in person reported scattered problems with incomplete ballots, and as polls closed at 9 p.m. there were reports of exceedingly long lines in suburbs north of New York City.

Numerous social media posts Tuesday night showed people still waiting in the dark outside several polling sites in Westchester County more than an hour after the polls closed. That included some polling locations in the 16th congressional district, where U.S. Rep. Eliot Engel was locked in an unresolved Democratic primary battle with Jamaal Bowman.

Bowman shared video of the lines online and called them “terrible.”

New York State Attorney General Letitia James’s office had gotten about 150 complaints by mid-afternoon, many about voters not getting absentee ballots in time for the election. The good-government advocacy group Common Cause New York had fielded about 100 complaints about similar issues, largely in New York City, and about some poll sites grappling with spotty wireless service.

It’s not unusual for New York elections to have some glitches. On Tuesday, “the unique problem was the two-page ballot,” Common Cause New York Executive Director Susan Lerner said. Presidential and congressional primary candidates were on one page, with state and local primary hopefuls on another. Some people complained they only got one of the ballot sheets.

New York voters who have applied for but not cast absentee ballots can legally vote in person.

Voting locations in the Albany suburb of Guilderland were staffed with mask-wearing poll workers Tuesday morning.

As for the contests themselves, voters selected former Vice President Joe Biden as the Democratic nominee for president, an anticlimactic end since his major opponents have all withdrawn from the race.

U.S. Rep. Alexandria Ocasio-Cortez defeated her Democratic challengers in her first defense of the seat she claimed in a shocking victory two years ago.

But there were dozens of races in the state in which The Associated Press did not declare winners on Tuesday, due to the large number of uncounted votes. They include all primary elections for state legislature, 16 congressional primaries and the Democratic primary for Queens Borough president.

Republican state Sen. Chris Jacobs won a special election Tuesday and will serve as the successor to U.S. Rep. Chris Collins, a Republican in western New York who resigned after an insider trading conviction. Jacobs also won a three-way primary to be the Republican candidate in November’s general election.

On the state level, 33 Democrats and one Republican in the Assembly and state Senate are facing primary challengers. Republicans are hoping to maintain their seats in a year when several state lawmakers have announced they won’t run for re-election.

Voting locations across the state were open, but upstate there were about 3,000 fewer precincts than in a normal year due to the difficulties of maintaining social distancing and expectations that more people will vote by mail.

Erie County, home to the state’s second largest city, Buffalo, said it had 15 fewer polling locations than in the previous election. Madison County, in central New York, had just 17 polling sites, down from 32 normally.