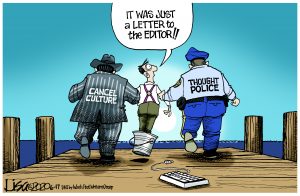 If you walk down a certain avenue in the Midwood section of Brooklyn, you pass a New York City District Middle School building decorated on one side with hand-made paintings that have been hanging there for much of the past year. Painted by 10- to 14-year-old children, these pictures depict every conceivable politically correct agenda that a progressive teacher can transmit to an unwitting pupil.

Among the typical tributes include those to climate change, Native Americans, illegal immigration and DACA. Other crudely drawn images protest racism and denounce the Republican Party. But others are far more sinister. One reads, “Happiness or violence: Choose your side.” Another reads, “They want to go to war with Iran, but the real enemies are among us. Who defines what a terrorist looks like?”

Against this backdrop, one need not wonder about the vast number of protesters and violent rioters that have wreaked havoc on our cities, or marvel at the speed with which they organized. The riots and their accompanying intolerance were not created in a vacuum, nor did they materialize overnight.

Years of indoctrination in America’s schools were fueled by progressive education reforms like Common Core, accelerated and exacerbated by universities, and buttressed by the media and entertainment industry, so that we now have a society that eschews any doctrine that doesn’t fit into the pictorial narratives that hang on that Midwood school building.

Worse, these narratives do not come at the expense of different beliefs; they come to the exclusion of them. We have reached a sort of McCarthyism of the left, where even some left-wing commentary is shut down because it is not extreme enough.

Take New York Times editorial editor James Bennet, who was recently driven out of the newspaper because he oversaw the publication of Senator Tom Cotton’s op-ed endorsing the deployment of the military to aid local law enforcement with violent George Floyd riots. Or veteran editor Stan Wischnowski, who was forced to resign from the Philadelphia Inquirer, after working there for almost 20 years, following backlash over an article’s headline of “Buildings Matter, Too.”

A professor at UCLA was suspended for declining to postpone final exams so students could participate in Black Lives Matter protests. A Vermont school principal was placed on administrative leave for posting the comment, “I do not think people should be made to feel they have to choose black race over human race.” The entertainment industry, a bastion of liberalism, was not spared either, with prominent players in the business axed from their roles or made to grovel in apology for not being obsequious enough about their “white privilege.”

Statues around the country are being toppled and defaced with no regard to their ownership or their place in history, even those of Abraham Lincoln. A Boston statue honoring the “Great Emancipator,” that has stood for over a century, is being targeted. And Boston Mayor Martin Walsh, who declared racism “a public health crisis,” announces his willingness to remove it.

The list of censurers, including corporations, and technology giants like Google, goes on and on. As does the degree of intimidation against those who disagree with the accusation that systemic racism exists in America, notwithstanding the injustice of George Floyd’s death. It is ironic that the slogan of choice at Black Lives Matter rallies has become “white silence is violence,” since much of white silence stems from fear of retributive violence for opening up one’s mouth.

Shutting down free speech and punishing contrary opinions has reached pandemic proportions, robbing many Americans of a sense of security in this country’s future. With the exception of brave conservatives on the radio or remaining media outlets, countless Americans have been reduced to acting like Marranos, secretly professing beliefs in private, while feeling isolated and plagued by self-doubt.

This past weekend, President Trump held his first rally since March in Oklahoma and declared that “the silent majority is stronger than ever before.” However, amid concerns about the coronavirus and interference from protesters, the diminished crowds may have belied that message. And while comments on some right-wing media sites testify to an anonymous mass of white males seething at the wrongs of affirmative action and other forms of reverse discrimination, it remains to be seen whether there are enough of them to constitute a silent majority.

Back in 1969, after the violent race riots of the late 60s had ravaged inner cities across America and amid a barrage of counterculture protests against the Vietnam War, President Nixon famously coined the phrase “silent majority,” while appealing to Americans for their support. A Gallup Poll indicated that 77% of American citizens and an overwhelmingly supportive Congress backed him up.

The same cannot be said about today. After his op-ed fiasco at The New York Times, Senator Tom Cotton also appealed for an end to the “cancel culture,” which has led to a politically correct inquisition. But while Nixon prevailed after less than a decade into the cultural revolution of the 1960s, we are now decades past that starting point. A recent Pew Report about the protests shows that “about six-in-ten U.S. adults say some people taking advantage of the situation to engage in criminal behavior has also been a major contributing factor in the protests,” but only “about four-in-ten Democrats and Democratic leaners agree.”

A half-century’s worth of indoctrination on every level has produced an America that not only counters its past culture but now cancels it altogether. And the steady shift away from patriotism and Judeo-Christian norms seems to have left our common sense in the dust. We now face a prospect of growing support for defunding the police and other measures that threaten to upend the bedrock of a safe society. If the paintings on the Midwood school building are any indication, one need only read the writing on that wall to predict America’s future.