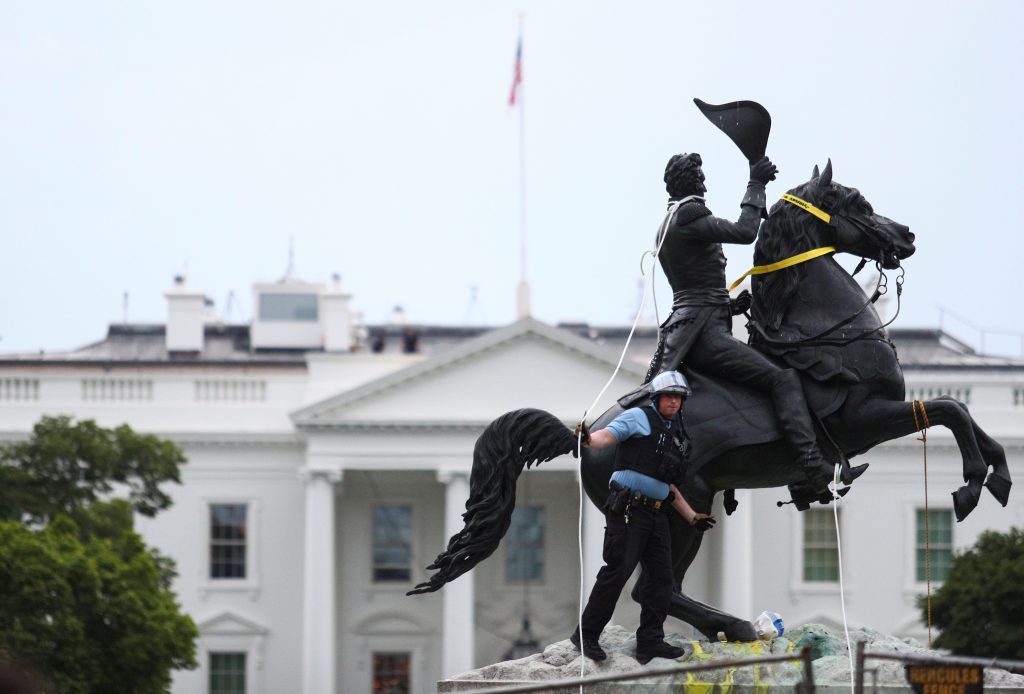 Protesters tried tearing down a statue of Andrew Jackson, the seventh president of the United States, in a park near the White House on Monday, scrawling curses on its pedestal and pulling on the monument with ropes before police intervened.

The confrontation unfolded in Lafayette Square, where police clashed with protesters over the death of George Floyd three weeks ago.

The thwarted effort to topple the famed bronze likeness of Jackson astride a horse was the latest bid, in protests fueled by Floyd’s death, to destroy monuments of historical figures considered racist or divisive.

Monday’s incident began around dusk with scores of protesters, most wearing masks against coronavirus infection, breaking through a 6-foot-tall fence erected in recent days around the statute at the center of the park.

Protesters then climbed onto the monument, fastening ropes and cords around the sculpted heads of both Jackson and his horse and dousing the marble pedestal with yellow paint before the crowd began trying to yank the statute from its base.

Dozens of law enforcement officers, led by U.S. Park Police, stormed into the square to scatter protesters. By dark, police had taken control and outnumbered demonstrators in the immediate area.

Jackson, a former U.S. Army general nicknamed “Old Hickory,” served two terms in the White House, from 1829 to 1837. Native American activists have long criticized Jackson, a Democrat, for signing the 1830 Indian Removal Act, which led to thousands of Native Americans being driven from their lands by the U.S. government and forced to march west, in what became known as the “Trail of Tears.” Many perished before arriving.