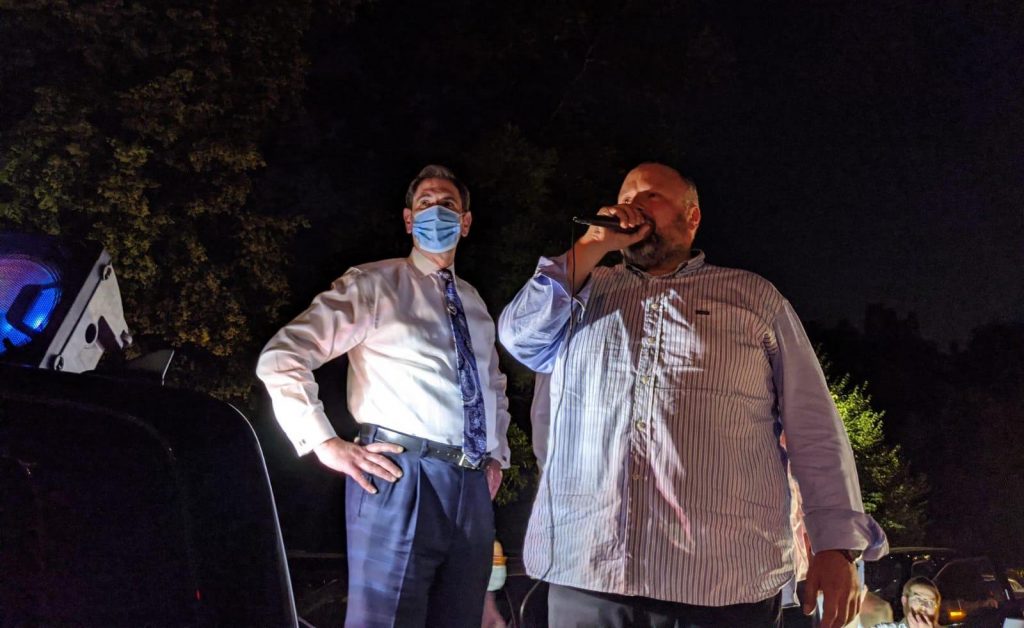 “If we cannot sleep, we will not let the mayor sleep,” declared Councilman Chaim Deutsch, leading the crowd in chants of “If we don’t sleep, you don’t sleep” and, “We need leadership.”

Fireworks have rocked the city throughout this month. There have been 4,559 calls to 311 complaining of fireworks in Brooklyn alone between June 1 and June 21 of this year, according to NYPD data provided to Hamodia. There were 11,535  such 311 calls throughout the city in 2020 through June 21, compared to just 54 during the same period of 2019.

Between June 1 and June 21 of this year, there were 12,578 calls to 911 complaining of illegal fireworks throughout the city, compared to just 1,007 for the entire period of January 1 to June 21 of last year.

The NYPD did not respond to Hamodia’s query as to the number of people summonsed or arrested for illegal fireworks this month. It is unclear whether police have been enforcing the law at all in this regard; videos shared on social media have shown police vehicles in areas where people have been shooting fireworks at each other with impunity.

On Monday night, cars carrying around 250 New Yorkers, mostly from Brooklyn, drove up to Gracie Mansion, to demand that the mayor crack down on the nightly fireworks and accompanying noise.

Police made the procession of vehicles stop at E. 87th Street and East End, one block from the official mayoral residence. Around midnight, the car horns began blaring, people started chanting, and several shot off fireworks.

“During these trying times, when people are trying to get their lives back together, all you hear is fireworks shooting at people out in the streets,” exclaimed Deutsch, speaking into a microphone to the cheering throngs. “People are just afraid to walk out of their homes.”

Deutsch noted that one social media video shows people setting off fireworks next to a sleeping homeless man.

The city had recently been plagued by riots and looting that accompanied Black Lives Matter protests. Critics, including police unions, have charged de Blasio with failing to allow the police to use its full force to protect the city. Following the end of the riots earlier this month, shootings have and illegal fireworks have soared.

Deutsch, a staunch supporter of police who is running in a Congressional primary Tuesday and is endorsed by several police unions, blasted the mayor and other elected officials for what he described as policies that inadequately protect the city.

The NYPD did not attempt to break up the protest; one participant described the police officers at the scene as “super-nice and patient.”

City Hall did not immediately respond early Tuesday morning to Hamodia’s request for comment on the protest, or on the protestors’ allegations that the mayor has not cracked  down on the illegal fireworks.

Deutsch was joined by other activists including radio personality Heshy Tischler, a recent antagonist of the mayor’s policy of keeping playgrounds locked through Phase 1 of the coronavirus shutdown, despite having allowed and even encouraged Black Lives Matter protests. Tischler has recently earned the moniker ParkBuster for having broken the chains off several shuttered playgrounds last week.

“Mr. Mayor, I want my city safe, I want my city run properly,” Tischler told Hamodia following the protest, which continued until around 1:00 a.m. “We want to be able to sleep. All we want is to be protected, and you’re not protecting us.”