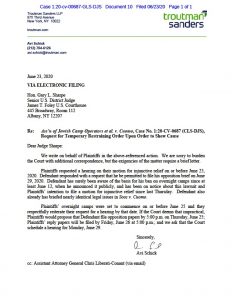 In a series of correspondence between dueling attorneys, the lawyers representing the plaintiffs in the lawsuit against Governor Cuomo concerning overnight camps are asking the judge for an expedited hearing, while the Office of the Attorney General for New York State is asking for an extended period of time to respond to the briefs filed by opposing council in the case.

After the initial suit was filed by Association of Jewish Camp Operators (AJCO) on June 12, the plaintiffs requested that due to the pressing nature of the case, with sleepaway camps scheduled to open on or by June 25, the court issue an order that the state respond by June 24, and the plaintiffs would respond by the morning of June 25, and a hearing be scheduled for the same afternoon. Mr. Schick noted that AJCO filed a lawsuit on Thursday, June 18, challenging the state’s action. He also gave notice to the Assistant Attorney General Kelly Munkowitz on Friday, June 19, that he had filed the suit and would be asking the court for a restraining order on Monday, June 22.

Chris Liberati-Conant, an Assistant Attorney General, wrote to the judge on June 22 requesting until June 29 to answer the brief with the claim that the plaintiffs had 10 days to file their brief, and they deserved the same amount of time “to develop evidence and arguments in opposition.”

The same day, Mr. Avi Schick, the lawyer for the plaintiffs, countered in his letter to the judge that the defendant have been aware of the basis for his ban on overnight camps since at least June 12, when he announced it publicly, and has been on notice about this lawsuit and Plaintiffs’ intention to file a motion for injunctive relief since last Thursday, June 18. In addition, the defendant also already has briefed the courts in nearly identical legal issues in Soos v. Cuomo.

Mr. Schick reiterated the request for a hearing by June 25, and if the Court deems it impractical, the defendant should be required to file opposition papers by 5:00 p.m. on Thursday, June 25, and the plaintiffs’ reply papers will be filed by Friday, June 26 at 5:00 p.m., with a hearing for Monday, June 29.

As of Tuesday afternoon, the judge has not yet issued a ruling in this matter.