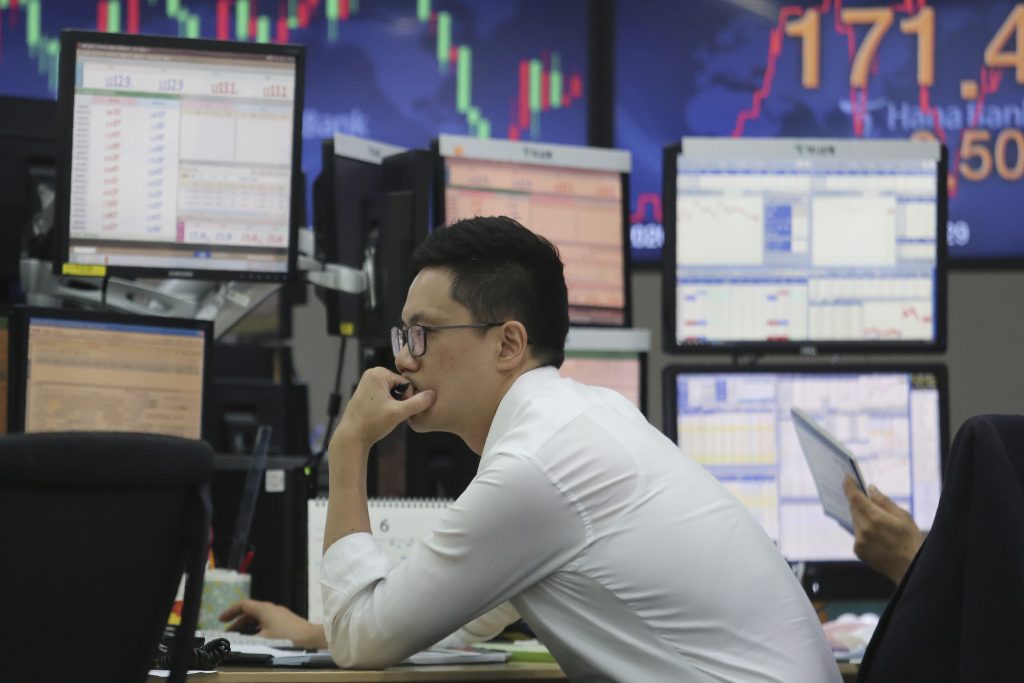 Stock indexes are higher on Wall Street in choppy trading Monday as investors weigh the risks that rising coronavirus cases could pose to hopes for an economic recovery.

The S&P 500 rose 0.4% in midday trading after an initial slide of 0.6% following weakness in overseas markets as the global tally of infections approaches 9 million. The price of gold rose, a sign of caution in the market. Bond yields were mixed.

The Dow Jones Industrial Average rose 94 points, or 0.4%, to 25,964, after earlier sliding 203 points. The Nasdaq composite was up 0.6%. Technology companies accounted for most of the gains, outweighing losses in health care, financial and other sectors. Airlines and cruise line operators were among the biggest decliners.

The choppy start to the week comes after the S&P 500 notched its fourth weekly gain in the past five weeks. Encouraging economic data, including retail sales and hiring, have helped stoke optimism among investors that the re-opening of businesses in the U.S. and other countries will pull the economy out of its recession relatively quickly. But a rise in new coronvairus cases is clouding the prospects for an economic recovery. On Friday, stocks sold off after Apple said it would be temporarily closing 11 stores again in four states, citing a surge in new virus cases.

American Airlines fell 7.2% on news that the company plans to raise $3.5 billion including $1.5 billion from selling stock and debt that can be converted to stock. Airlines have been scrambling to raise cash to survive a sharp drop in travel. Alaska Airlines said Monday that June revenue will be down about 80% from a year ago, though that’s better than April’s 87% decline and May’s 83% drop. Alaska Airlines dropped 1.1%.

Cruise line operators were among the biggest decliners in the S&P 500. Norwegian Cruise Line, Royal Caribbean and Carnival each fell more than 7%. The stocks have been among the most hard-hit as the cruise industry remains shut down due to the coronavirus.

The World Health Organization on Sunday reported the largest single-day increase in coronavirus cases by its count, at more than 183,000 new cases in the previous 24 hours. The U.N. health agency said Sunday that Brazil led the way with 54,771 cases and the U.S. next at 36,617. India confirmed 15,400 new cases.

The United States also reported more than 30,000 new coronavirus cases on Friday and Saturday, with the daily totals their highest since May 1. A large share of the cases are in the South, West and Midwest, where hospitals in some areas are becoming overwhelmed.

Case numbers in South Korea and China have appeared to be moderating after recent outbreaks centered in their capitals.

Great uncertainty remains over whether countries that have been relaxing pandemic-fighting restrictions on travel and business might end up re-imposing broader controls that would slow a recovery from the worst global downturn since the Great Depression in the 1930s.

Even if widespread stay-at-home orders don’t happen, the fear is that scared shoppers may still shy away from stores and businesses may pull back on their own spending.

New data on home sales Monday show the virus outbreak continues to disrupt the U.S. housing market. Sales of previously occupied homes plunged 9.7% in May, according to the National Association of Realtors. The May slide pushed sales down to a seasonally adjusted annual rate of 3.91 million, the slowest pace since 2010. Homebuilder shares were mostly lower. Hovnanian Enterprises dropped 3%.

Investors will get a broader look at the state of the economy toward the end of this week, when the government issues data on consumer spending, weekly unemployment aid applications and durable goods orders. On Tuesday, the Commerce Department serves up new home sales figures for May.

The yield on the 10-year Treasury note fell to 0.69% from 0.70% late Friday. It tends to move with investors’ expectations for the economy and inflation.