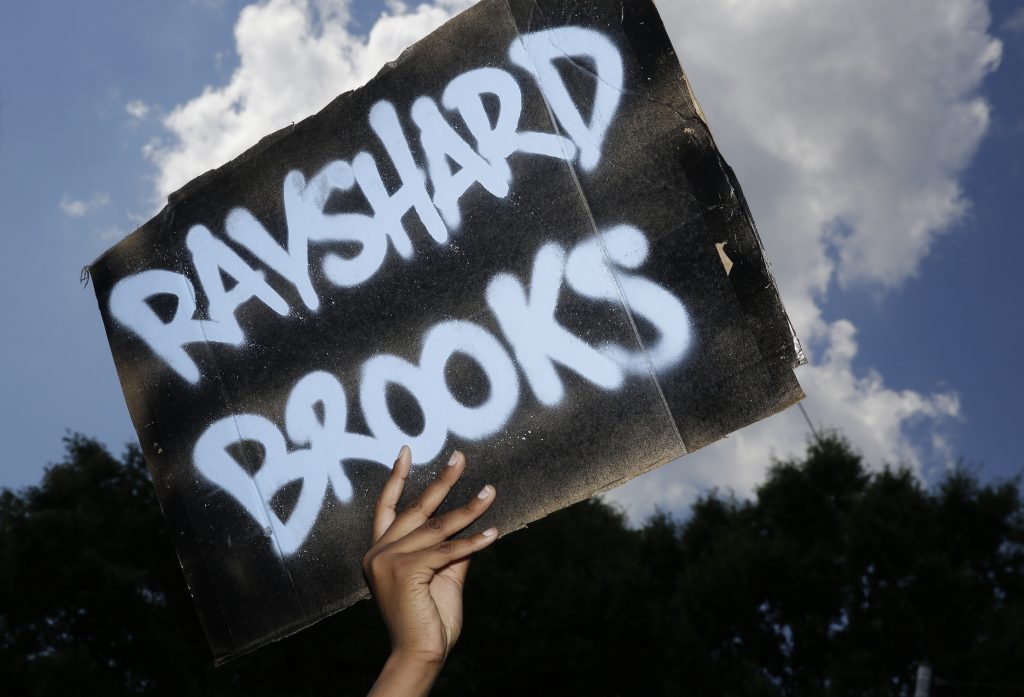 The former Atlanta police officer charged with murder in the shooting death of Rayshard Brooks last week turned himself in to authorities on Thursday afternoon, in keeping with an arrangement with prosecutors, jail records showed.

Garrett Rolfe, a white officer charged on Wednesday in the killing, was being held at the Fulton County jail. He was fired by the city’s police department on Saturday, a day after the shooting in the parking lot of a Wendy’s fast food restaurant.

The death of Brooks – the latest in a long line of African Americans whose fatal encounters with law enforcement have been captured on video – further heightened social tensions at a time of national soul searching over police brutality and racism in the U.S. criminal justice system.

Fulton County District Attorney Paul Howard, who is black, said on Thursday that he himself had received a series of threats, including one from an individual who threatened to burn down his home.

“The threats are racist in nature,” Howard said in an interview on MSNBC. “It’s unfortunate that those things have happened, but I can tell the people who did it that it’s not going to change what I do.”

Announcing the charges on Wednesday, Howard had said he recommended no bond for Rolfe, who shot Brooks twice in the back with his service handgun after a scuffle. Rolfe was charged with felony murder and 10 other counts.

A second officer on the scene, Devin Brosnan, did not discharge his weapon. He faces a handful of lesser charges, including aggravated assault and violation of his oath.

Brosnan turned himself in at the jail earlier on Thursday and was released on bond, according to his lawyer.

Howard had told reporters on Wednesday that Brosnan had agreed to turn state’s evidence against his fellow officer, but Brosnan’s attorney, Don Samuel, on Thursday denied that.

While his client had told Howard’s office “everything” during a lengthy interview and would cooperate with the Georgia Bureau of Investigation’s probe, Brosnan had not agreed to be state’s witness, the attorney said.

The police encounter with Brooks began calmly after he was found sleeping in his car in the restaurant’s drive-through lane. Rolfe and Brosnan administered a sobriety test, after which the situation escalated.

Previously released video of Brooks appeared to show him grabbing one of the officer’s Taser stun guns and turning and pointing it at Rolfe before being shot.

Howard said Thursday that investigators concluded Rolfe knew by then that the Taser had already been fired twice and thus was rendered harmless.

One of the bullets from Rolfe’s gun hit a white Chevy Trailblazer at the Wendy’s, threatening the life of the three passengers inside, according to Howard and the charging documents against the two officers.

One of the car’s passengers, Michael Perkins, told a media briefing on Thursday that he had taken cover in the back seat as the struggle between the officers and Brooks escalated. He said he “smelt gunsmoke” but was unaware the car had taken a bullet until later.

“I almost was killed myself. I feel troubled about it but I’m glad the family is getting the justice it deserves.”

Samuel described the decision to charge his client as “irrational” and politically motivated. He said Brosnan’s conduct on the night of the shooting was “exemplary” and a “textbook example” of how an officer should approach a situation involving someone inebriated, as Brooks was that night.

While Brosnan did not fire his gun, Howard charged him with aggravated assault for allegedly standing on Brooks’ body after he was shot and for violating his oath of office by not rendering medical aid immediately after Brooks went down.

Samuel said Brosnan, despite suffering a concussion during a tussle with Brooks, rushed to provide medical aid.