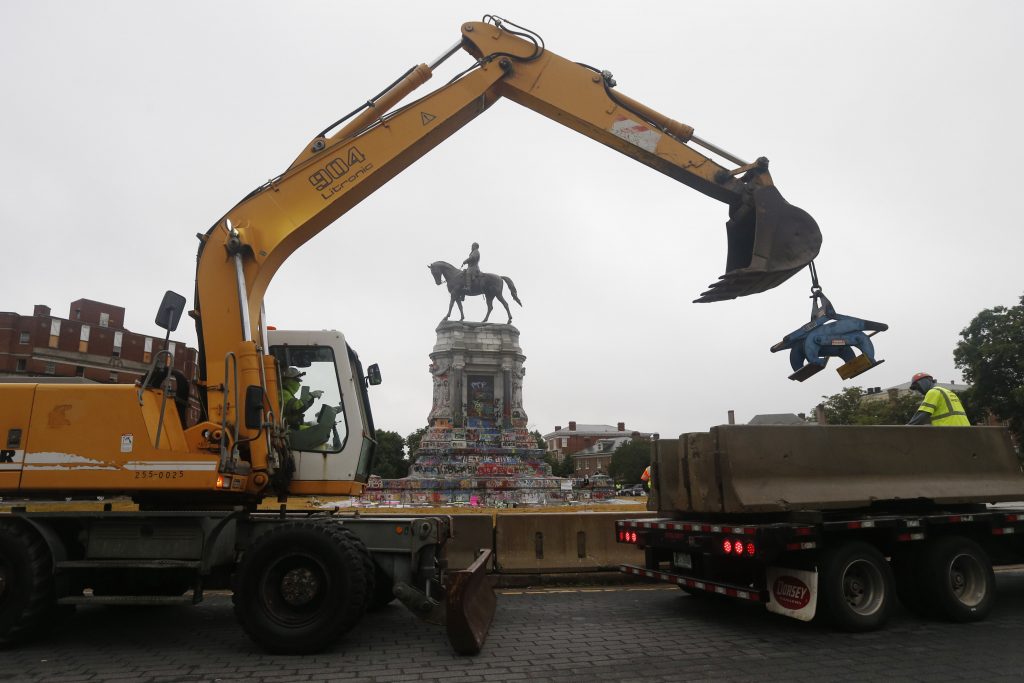 Richmond Circuit Court Judge Bradley Cavedo made the decision after hearing from attorneys for the state and for the plaintiff in a lawsuit against Gov Ralph Northam. Earlier this month, Cavedo had issued a 10-day injunction barring Northam from taking down the bronze equestrian statue of the Confederate hero.

Cavedo said the monument “is the property of the people of the Commonwealth” of Virginia, but said he would give the plaintiff, William C. Gregory, another 21 days to refile a new complaint expanding on his concerns about removing it. Gregory and his attorney declined to comment as they left the courtroom.

State Attorney General Mark Herring objected to the ruling, saying it was giving Gregory a “third bite of the apple.” And he pledged to fight as long as it takes to remove the statue, which he called a symbol of oppression.

“I want to be clear about this,” Herring said at a news conference after the hearing. “This grandiose monument to a leader of a four-year armed insurrection against the United States of America in order to perpetuate a brutal and immoral system that enslaved millions needs to come down.”

Northam, a Democrat, recently ordered the statue’s removal, citing the pain gripping the nation over the videotaped killing of George Floyd.

Floyd’s death has sparked global protests that participants have vowed to turn into a sustained movement focused on addressing racial injustice and police brutality. It also spurred intense reexamination of statues and monuments of historical figures around the world.

The 12-ton (Lee statue is about 21 feet tall and sits on a pedestal nearly twice that high in the grassy center of a large traffic circle on Monument Avenue, a prestigious residential thoroughfare in Richmond. Now cloaked in graffiti, it and other nearby monuments have become a rallying point of more than two weeks of protests and occasional clashes with police.

The statue was unveiled before a massive crowd in May 1890, at a time when the Civil War and Reconstruction were long over, and Jim Crow racial segregation laws were on the rise.

Judge Cavedo wrote that it was in the public interest to delay any action until the resolution of a lawsuit filed by Gregory, who is described in the lawsuit as a descendant of signatories to an 1890 deed that transferred the statue to the state more than a century ago. The lawsuit argues the state agreed to “faithfully guard” and “affectionately protect” the monument.

Herring argued in a brief filed Tuesday that the deed does not prevent the governor from removing the statue and does not entitle Gregory to injunctive relief.

“The only question is whether a single plaintiff may call upon the equitable powers of this Court and use 130-year-old documents and inapplicable doctrines of property law to countermand the Governor’s decision. He cannot,” Herring’s brief said.

The Lee statue is one of five Confederate monuments along Monument Avenue, a National Historic Landmark district. Monuments along the avenue have been tagged with messages that say “End police brutality” and “Stop white supremacy.”

Richmond Mayor Levar Stoney last week announced plans to seek the removal of the other Confederate monuments on the avenue, including statues of Confederate Gens. Stonewall Jackson and J.E.B. Stuart. Those statues sit on city land. The Lee statue is on state property.